The Great Gatsby premieres May 10 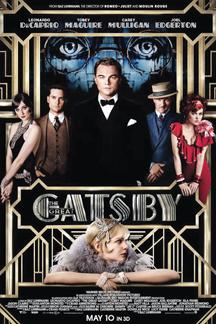 “In my younger and more vulnerable years my father gave me some advice that I’ve been turning over in my mind ever since. ‘Whenever you feel like criticizing any one,’ he told me, ‘just remember that all the people in this world haven’t had the advantages that you’ve had.’”

These are the famous opening lines of F. Scott Fitzgerald’s The Great Gatsby, a novel considered to be one of the most timeless and classic pieces in the history of American literature. This iconic book, however, is making its 2013 debut as a film.  It is set to take on the big screen May 10, featuring a star-studded cast and, according to Internet Movie Database, a $127 million budget.

The release of The Great Gatsby movie has re-sparked the controversy surrounding film adaptations of literature. A study done by PBS suggests that up to 65 percent of films today are based on or adapted from literary works of the past. Reflecting these numbers, debate continues over how much creative liberty film directors should take and how thematically close a film should remain to a book. While a variety of reasons contribute to how directors choose to adapt literature, students and teachers here said the film medium of storytelling could contribute many elements to the literary works from which they are inspired.

Boats Against the Current

Senior Claire Yerant, who said The Great Gatsby is one of her favorite novels, said she can see why some may criticize adaptations, but she said she is overall excited to see what the film does with the story.

“I think that (adaptations) are a great way to visualize events and themes that occur in novels,” Yerant said. “Even if they aren’t a direct or accurate adaptation.”

According to IB film teacher Jim Peterson, the level of creative liberty that directors take when adapting novels depends largely on the director’s own vision.

“There are some films that are out there that are more religiously adhering to the original book, but there are some that take a lot of liberty to it,” Peterson said. “So I think it just kind of depends on the film and the filmmaker.”

According to English teacher Cristen Cassler, who has been anticipating the release of The Great Gatsby movie for months, these creative liberties that filmmakers take can provide additional insight into a story that the literature initially did not have.

“It’s always nice and refreshing to see different interpretations of literature,” Cassler said. “I think that can give us maybe a different perspective of, ‘Oh, I didn’t think of the character this way’ or ‘I didn’t think that this part was as important as another part’ that the movie might emphasize.”

Her Voice Is Full of Money

However, Peterson added that another reason that films may revamp books is an attempt to appeal to a wider audience and attract more viewers. Films will often cut scenes from books that may be culturally irrelevant to modern times or add scenes to update the story for a new generation.

“It’s the almighty dollar that drives everything,” Peterson said. “So you’ve got to make it wide enough to appeal; you’ve gotta make it commercially viable.”

According Cassler, however, this attempt to expand the audience base can contribute positively to the original work as well.

“I think that means that more people will be willing to watch it and then hopefully read (the book),” Cassler said. “Because you do have that selling actor that’s going to draw people in. It may hit a wider array of people that may not have been familiar with the book or may not have wanted to read the book.”

Yerant agreed with Cassler, saying the generation of today would be attracted to watching the film version of a story over reading the novel.

“I think it will attract new people to (the story),” Yerant said. “Because if you think about it, more people our age will be excited to see the movie than they would be to read the book.”

A University of Maryland study reflects these views, showing that in 2010, teen leisure reading went down 23 percent. Consumption of movies and visual media, however, has steadily increased.

With all these variables of budget and audience appeal, some films are acclaimed for their interpretation of the book while others are hopelessly berated. Peterson said the ultimate success of a production could largely be traced back to the original literary work.

“If people agree with what the director is showing, then it’s a great piece of work, and if people don’t agree, then all of a sudden its trash,” Peterson said. “It has to do with the connection that people have with the literature; that will have a great impact on whether they like it or dislike it.”

Cassler agreed that the nature of the original literature could contribute to the success or downfall of an adaptation. With a classic work like The Great Gatsby, she said, where many people have read it and have connected with it, creating an equal representation in film can be intricate.

“I think there are probably bigger shoes to fill and probably higher expectations for the film directors who are going to adapt a classic rather than just a modern kind of pop culture book or series,” Cassler said.

Yerant agreed that classic book adaptations could come with greater responsibility to directors.

“When a classic is changed into a movie, they have to care a lot more about staying true to the book,” Yerant said. “Because people love the book for what it is and not just the plot and the story, so they have to make sure they keep (certain elements) the same (because) people really love the way that it’s written.”

Overall, taking into consideration the history of the classic piece and what he has seen of the trailer, Peterson said he believes The Great Gatsby adaptation will receive a strong yet mixed reaction from viewers.

“I think it will split. I think there will be people who really love the (book) and are traditionalists and will hate the film, but there will also be a bunch of people who will see it and say, ‘Oh my gosh…that really means something now to me.’” Peterson said. “It’s either going to be really, really great for English classes, or it’s going to be really, really forgetful.”