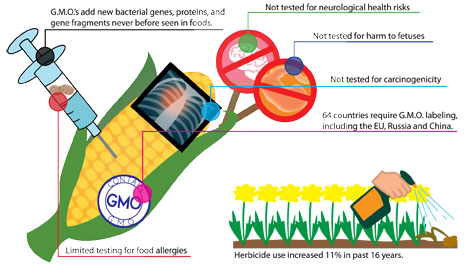 While people consume food on a daily basis, many don’t bother to check what it’s made of or how it was produced. With no regulations currently set on the labeling of foods, it is often hard to identify the ingredients of foods such as corn or zucchini that could potentially contain genetically modified organisms (G.M.O.’s), which are plants or animals whose genetic material has been changed to enhance favorable traits like tolerance of herbicides. Because of this, some stores, specifically Whole Foods Market, have begun to take action against this issue.

According to a 2013 New York Times survey, 93 percent of the participants supported labeling and 75 percent expressed concern about the potential effects of G.M.O.’s. Senior Sarah Kihn said she has similar opinions, which is why she resorts to buying and eating only organic foods.

In the future, however, being aware of which foods contain G.M.O.’s and which don’t could be less problematic. According to Libba Letton, spokeswoman for Whole Foods Market, Whole Foods has recently proposed to have all products in stores located in the United States and Canada labeled if they contain genetically modified organisms by 2018.

“Whole Foods Market is the first national grocery chain to set a deadline for full G.M.O. transparency, and we’re doing it in response to our customers,” she said. “This bold task will encourage manufacturers to ask deeper questions about ingredients, and it will help Whole Foods Market provide greater transparency about the products it sells so our customers can be empowered to make informed decisions about the foods that are best for them.”

Local stores have adopted this goal and are making attempts to better inform consumers about their products.

“We want to offer true freedom of choice when it comes to farming and purchasing non-G.M.O. foods,” Sarah Smith, community relations and marketing specialist at Whole Foods Market in Carmel, said. “We believe that government-mandated labeling of G.M.O. ingredients would enable shoppers, retailers and manufacturers to make purchasing decisions that reflect their beliefs.”

Kihn said she thinks this policy would help people become more aware about their food.

“Maybe they’d be on the lookout more and maybe they’d want to research more what G.M.O.’s are because I think a lot of people don’t actually know what G.M.O.’s are,” she said. “They just kind of eat whatever, and it’s just an abbreviation to most people.”

In order to reach this goal, Whole Foods is taking measures and working with the Non-G.M.O. Project.

“Whole Foods Market has been collaborating with many of its supplier partners for several years to source products without G.M.O. ingredients,” Letton said. “Whole Foods Market currently sells 3,300 Non-GMO Project verified products from 250 brands, more than any other retailer in North America. It will now expand this effort, working with suppliers in all categories as they transition to ingredients from non-G.M.O. sources, or clearly label products containing G.M.O.’s by the five-year deadline.”

Once this G.M.O. labeling and non-G.M.O. policy is put into place, it could have beneficial effects on both consumers and retailers.

“The prevalence of G.M.O.’s in the United States, paired with nonexistent mandatory labeling, makes it very difficult for retailers to source non-G.M.O. choices and for consumers to choose non-G.M.O. products,” Smith said. “To ensure we can continue to offer these in the future, we are stepping up our support of certified organic agriculture where G.M.O.’s are not allowed, and we are growing the non-G.M.O. supply chain with our supplier partners.”

To avoid eating G.M.O.’s in the meantime, Kihn said she researches online to find out which brands are guaranteed to have G.M.O.-free products and shops at Earth Fare, Trader Joes, Good Earth and Whole Foods to buy her organic products. Some grocery stores like Marsh also have organic aisles for those who want to stay clear of G.M.O.’s, and products that are labeled with a Non-G.M.O. Project Verified seal are G.M.O.-free.

Despite some stores’ recent efforts to respond to this matter, G.M.O. labeling still remains a controversial issue that elicits concern from many people.

“I don’t think the U.S. government should just add G.M.O.’s to foods without notifying the people because we’re the ones eating it and it’s affecting us,” Kihn said. “I think everyone should know what’s in their food, and they should have the option to decide if they want to eat it or not.”