Increasing number of students coming to America to attend college 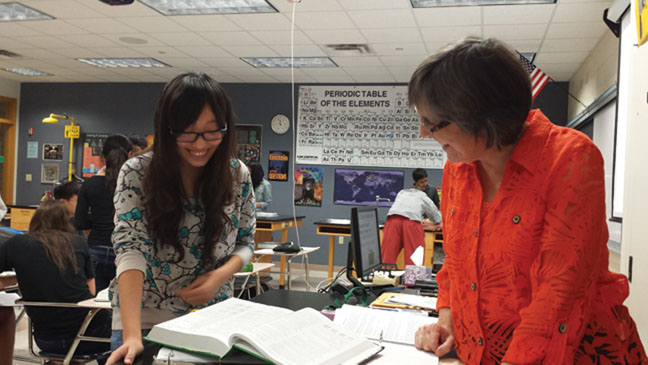 Before her sophomore year, senior Jennifer Huang left her friends and relatives behind to move more than 8,000 miles from Shenzhen, China, to Carmel with her mom and stepdad. The reason for such a choice was that she wanted to prepare for university in the United States.

“The fact is that in China, if you go to college in other countries like America, Canada (and) Australia, you will get better (job) opportunities and higher salaries when you go back to China. Many parents like to send their children abroad (for this reason),” Huang said.

Huang said that out of all her classmates from elementary school, about 50 percent are currently studying in U.S. high schools to prepare for an American college. Many of her friends’ parents even had to sell their homes so they could afford an American college education for their children.

Huang and her former classmates are just a few of the many foreign students who plan to study at an American college. In fact, the number of international students at colleges and universities in the United States has hit a record high of 764,495 students in the 2011 to 2012 school year, up 31 percent from a decade ago. This is the sixth consecutive year that the Institute of International Education (IIE) reported expansion in the total number of international students.

Although the end result of studying in America can be rewarding, the road to success has not always been easy for Huang. She said there were many difficulties when she first moved here, including overcoming the language barrier.

“At the beginning, I couldn’t understand what the teacher was talking about. In my math class, I just looked at the textbook because I didn’t understand the teacher. But right now, I think my listening and speaking skills are getting much better,” Huang said.

Although adjusting to a new language as a teenager is not the easiest task to accomplish, Marilyn “Mimi” Chase, the International Division Director at the University of Indianapolis, said that doing so will ultimately help foreign students when studying in American colleges. Foreign students who have studied at American high schools get a head start on adapting to the language barrier, as well as the culture barrier.

“There is a lot less cultural adaptation to go through because they’ve already adapted. They already understand English at a colloquial level, not just in the academic studies,” Chase said. “They feel more comfortable maneuvering among American students. They probably feel more comfortable with American roommates, Americans in the classrooms, American teachers (and) the American teaching methodology, which is usually a lot different and gives students a lot more independence.”

Huang said she agrees that attending an American high school first will help her in the long run. According to her, she is glad she came to high school before going directly to an American college, where it would be much harder to adapt to the language barrier, with the classes being more difficult.

“Here, I might have a friend in math class, but I only have one class with her. It’s not easy to (get to) know each other,” Huang said.

Nonetheless, Huang said she is now happy that she is almost about to achieve her goal of attending an American university. She said she hopes to go to Purdue to study physics.

Rosanne McLean, an instructional assistant in the ENL program at CHS, said international students like Huang can develop many skills from studying abroad, both in high school and college. One skill is the ability to adjust to new situations, which is a skill that will help them in every part of their life, she said.

Chase said that international students can also learn a lot about themselves from studying abroad.

“To me, the number one benefit that any person can get (from studying abroad) is a better understanding of how they are a product of their own culture and what their culture is,” she said. “Because when we’re within our own culture, we don’t know any different. We don’t even recognize that we have a culture. Everybody’s doing the same thing. When you study abroad, you realize that not everybody does everything in the same way.”