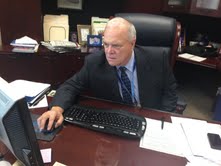 Principal John Williams works on his computer in his office. Williams said that the classes of the AP Capstone Program will count as English credits next year. CLAUDIA HUANG / PHOTO

The classes of the AP Capstone Program will count as English credits, according to Principal John Williams. He said the administration does not want students to sacrifice elective classes in order to participate in the program.

Williams said, “Students will have to choose between the AP Capstone and HiLite, or this and orchestra, or this and advanced (physical conditioning), or this and Ceramics 5, and that’s not what we want to do. We don’t want to do that if we don’t have to.”

Williams said while some may disagree with the decision, both the Department of Education and the College Board have approved the program as part of the English department.

“It certainly meets the curriculum. We actually ran this by some of the English teachers that are on an advisory board, and they were very excited about it,” Williams said. “Everyone’s going to have their own opinion. Certainly, there are some things that we want to talk about. It won’t replace the English curriculum.”

Student Body President George Gemelas said that with AP English Literature and Composition being offered to sophomores, he agrees with the decision of making the classes worth English credits.

“On one hand, I like that it’s taking something out of your schedule so you can put AP Capstone in. But on the other hand, AP Literature during junior year is so essential. It really hones in on your skills of analyzing text and literature,” Gemelas said. “But, if sophomores can take AP Literature, then I don’t mind that AP Capstone takes the place of an English credit.”

Also, the administration and counseling center have been continuing to promote the program. Williams said he has received a great deal of positive feedback from both students and parents.

Similarly, Gemelas said he has noticed significant interest in the AP Capstone Program, and he encourages underclassmen to participate.

Gemelas said, “I know there has been a lot of discussion among underclassmen, and I know lot of people have been asking me ‘Would you take it?’ I have been telling them I would take it because I think it’s a fantastic opportunity.”