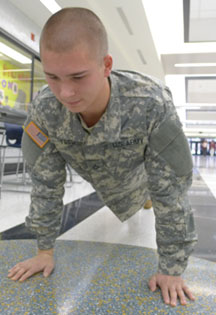 se to enlist in the Reserved Officer Training Corps (ROTC) program at IU for the upcoming school year. He said he switched his original decision to join the National Guard to join ROTC instead based on the benefits of the program.
“I was going to join the military, but I always thought that college was a key in getting a job after my military career,” Todd said. “I joined National Guard then ROTC came up, and I thought it was a great way to get a job after college. It gives me an opportunity to be an officer after college which is a second lieutenant in the Army so I also get paid as an officer and get a civilian job, which in the end, gives me more job opportunities in the future.”
Offered on more than 1,200 campuses nationwide, ROTC is a program in which cadets gain practical experience in management and problem-solving while training to become Army officers. According to lieutenant colonel Wesley Russell, the scholarship and enrollment officer for the military science department at Ball State University, it is the best leadership opportunity there is in regards to the Army.
“What ROTC means is that we train students to become and prepare themselves to be military officers,” Russell said. “Either on the active component in the active Army or in the reserved component as the National Guard or Army Reserves.”
Russell agreed that there are many benefits of choosing to enroll in ROTC during a student’s four years in college rather than enlisting in the Army afterwards.
“The big advantage is you don’t have to go off to the military to get college benefits,” Russell said. “Let’s say that you’re a very good student with a 2.5 or better GPA, you score a 1,200 or better on your SAT. You can come to Ball State University, Purdue University or IU and receive benefits. They will pay for your schooling so you are training to become a military officer, if that’s your desire, and you’re getting your schooling paid for at the same time. The other thing is, your time of service actually starts while you’re in college.”
One major benefit of doing ROTC is that most schools in Indiana offer this program, and a majority of the universities offer scholarships and make the price of paying for college much cheaper than it would be for the average college student. The high school four-year scholarship is for students planning on attending a four-year college program. The idea is to help students focus on their studies, not how they will pay for them.
Cason Elkin, current freshman at Ball State University and an officer-in-training, chose to do ROTC because he said he was happiest with being able to get his schooling paid for by choosing a certain route.
“You make a lot more money and most of your college is paid for by the end of your four years,” Elkin said. “A lot more doors are opened right after college, definitely. You have to meet a few requirements to do ROTC, such as having decent grades, being in good physical condition and being between the ages of 17 and 26. We get to go to college full-time and experience what it’s like to be in the Army. It’s an awesome program with tons of benefits.”
Russell has been involved in Ball State University’s ROTC program for a long enough time to see his cadets go through the entire four years and enjoy their time at school.
“They get a taste of what it’s like to be in the military. You get to enjoy the college atmosphere, and then you get to experience the physical fitness training,” Russell said. “The students really enjoy it because they get the taste while they still enjoy college. And they get the leadership experience so whether or not they go into the military, they’ll have that for their resumes, no matter what their major is.”