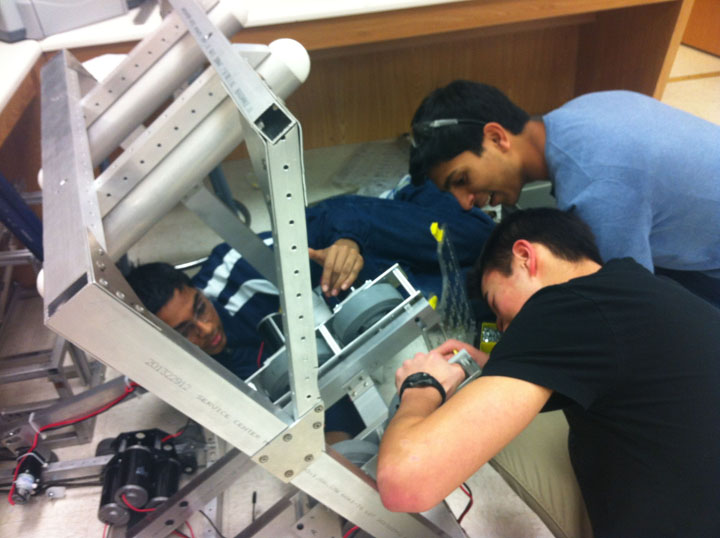 Sophomores Sameer Leley, Aryaman Gupta and Kalen Rudd make adjustments to the shooter. TechHOUNDs tested out its prototype for the first time after school on Monday, Jan. 27. PHOTO / JESSICA TAO

TechHOUNDs, the robotics team, completed its first robot design and tested it out on Jan. 27. TechHOUNDs sponsor George Giltner said the designing has gone well, although the design is subject to change because it may breach competition rules. According to TechHOUNDs member and sophomore Kalen Rudd, the 2014 season has been different because there is more of a team element.

This season’s objective is to build a robot that can pick up a 24-inch radius exercise ball and shoot it into a 7-foot goal. Giltner said, “Our design works, but since we use wheels to propel the ball, like a baseball shooter, the robot leaves these small marks on the ball. Our robot doesn’t really damage it, but the rules say that we can’t mark the ball ‘routinely,’ and we don’t know how closely the referees will follow the rule. It’s not an impossible fix, though.”

According to Giltner, the last week of January marked the start of the second half of the season. Rudd said, “The beginning of the season has been rough because we lost a week of building to the snow storm. But for the amount of time we’ve had, I think the robot has turned out really well.”

He said, “This season’s game is a lot different than last year’s because it’s more team-oriented, which is a lot more fun for us.”