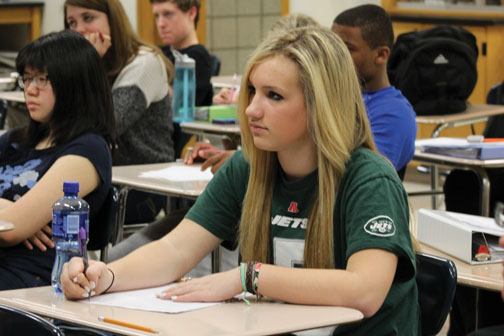 This summer, when students open up their laptops at home, some of them may be studying and earning credits instead of just roaming the internet. Since CHS partnered with the Indiana Online Academy in order to offer some summer school classes online, students will have the opportunity to take over 35 different courses online between June 4 and July 26.

Sophomore Juliet Sanders said she plans to take Chemistry I online this summer in order to replace her original grade. Not only will Sanders work at her own speed, but she will also be able to work on her class work anytime from anywhere with internet access.

“Now I don’t have to deal with the early times of summer school or changing my schedule to be home,” Sanders said. “I would be able to learn better online, anyways, because I can go at my own pace.”

Counselor Stephanie Payne has helped students sign up for summer school, with registration dates ranging from April 9 to May 31. While she said she sees the benefits of online classes, Payne said that such an arrangement puts much more responsibility on the students themselves.

“It creates an option that gives students more flexibility with not only one but two summer school courses,” Payne said. “There is flexibility with doing it online as the students are not stuck with coming (to CHS) everyday, but it does mean you have to be a little more motivated on your own.”

While Sanders said she would hold herself accountable to stay on task and complete her work in a timely fashion, freshman Jack Missler said his first preference is in-class courses.

“I am taking gym as of now, because I hurt my shoulder and may need to make up the credit,” Missler said. “I would learn better in the actual class; online, there are too many distractions.”

According to the Indiana Online Academy’s website, the summer school class listing contains free classes varying from regular-weight courses to AP courses in a variety of subjects. However, Payne said CHS does not offer all of the classes available online, such as the SAT or ACT prep classes; it only picks those courses that match with the curriculum.

“The Indiana Online Academy program has been offering these classes, and they have been available to the school system for a few years to use as summer school,” Payne said. “As more schools have found themselves strapped for money, a lot of schools have taken up the online courses as their summer school.”

Payne also said that with the new online courses, students would not have to set their schedules around summer school. She said this option would give them the ability to work in their own free time. This is one of the reasons Sanders said she is taking advantage of online classes.

“I will be traveling a lot. I’m going on a mission trip for one week and a family vacation for another,” Sanders said. “Online school will be helpful because it doesn’t have the absence rules of regular summer school.”

While Missler will be staying in-state during the summer, he said he did recognize some benefits to the new alternative.

“I will treat it like regular school, but it allows me to take extra electives next year,” Missler said.

With the increased push to incorporate more technology into school curriculums, Payne said online courses will be available at the disposal of students in the future, as well.

“With some state initiatives that are encouraging more technology integration into schools, there has been some discussion of requiring an online course as a part of graduation by the state,” Payne said. “This will also prepare students for some college courses they may take in the future.”

While internet access may not be available to all students at their homes, CHS computer labs and those of the Carmel Clay Public Library will be open to students during the summer.

Sanders said, “I think it is a good idea and very practical for the way our society runs now.”