Theater students to perform spring musical ‘Grease’ May 15 to 18 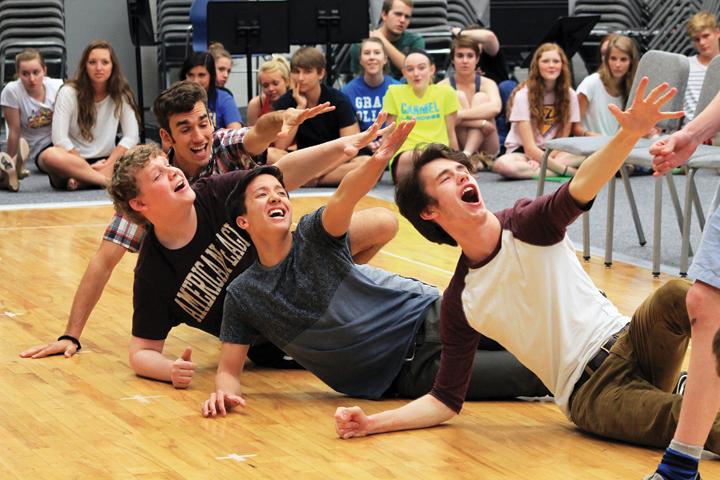 GREASED LIGHTNING: Seniors Nicholas “Nick” Dunbar, Andrew Kathan, Kyle Caress and Eric Wiegand rehearse a number for the spring musical “Grease.” Theater students will perform May 15, 16 and 17 at 7 p.m., and May 17 and 18 at 2 p.m. in the CHS auditorium. CRYSTAL CHEN / PHOTO

The cast and crew of the spring musical, “Grease”  are preparing to perform for the Carmel community on May 15, 16 and 17 at 7 p.m., and May 17 and 18 at 2 p.m. in the CHS auditorium, according to director Lamonte Kuskye. Online ticket sales have started and tickets may be bought at totalgatesolutions.com. Tickets range in cost from $8 to $18 depending on the location of the seat.

According to Kuskye, this year’s musical will also feature a preshow, in which a group of girls will performs songs outside the auditorium in the time preceding the performance of “Grease.”

He said, “Part of (the preshow) is just to get everyone in the mood for the show. We had so many great people audition, and we could only use so many on stage, so we created another show.”

Kathleen Muloma, preshow cast member and junior said she and other members of the show will have to practice performing in a different environment, since the performance is held in front of the auditorium instead of on stage.

“You have  to be very comfortable with performing when people are five feet away from you and staring you in your eyes,” she said.

Hannah Andrews, member of the women’s ensemble in the actual show and sophomore said “Grease” will be successful partly because of its familiarity to students.

“I think this (production) has a lot of high energy, and it’s very familiar to everybody, which is why this is going to be a sellout show.”

Andrews said the cast of the actual musical practices nearly everyday, especially the members who have speaking parts. She said watching more experienced cast members practice has helped her as a performer.

“You learn so much about how to act and sing and put on a show,” she said.

According to Kuskye, “Grease” was performed at CHS more than a decade ago. He said the musical was selected to be performed again this year because of the roles it had to offer.

“Most important part in selecting (the musical) is looking at what show is right for the kids we have,” Kuskye said.

According to director Ann Conrad, this year’s cast has unusually strong male singers, so the directors looked for a musical that offered plenty of male roles.

Conrad said she and Kuskye will be leaving CHS next year. Muloma said this fact motivates the group to work harder and come out stronger.

“This is kind of their finishing stride. I feel like there is an even higher amount of motivation among cast members and preshow members to leave it all on stage and to give it everything that they have. I’m really excited to work in that atmosphere,” Muloma said. “This is our last chance to give it back to (Conrad) and give it back to (Kuskye).”