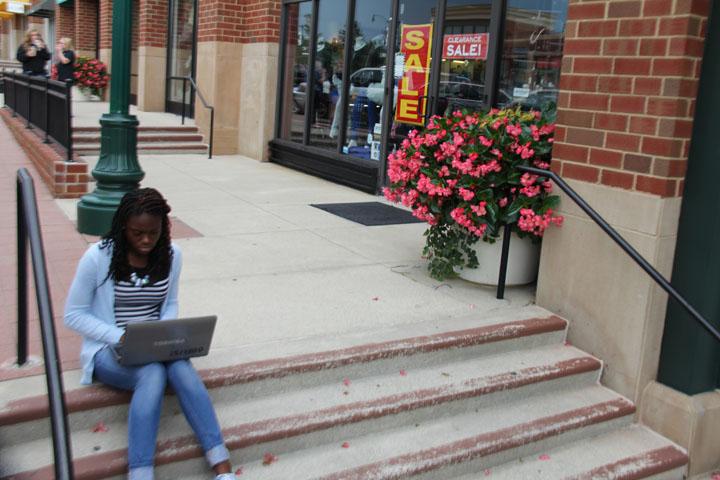 Sophomore Odelia Satchivi came home to find a package waiting for her. Inside was a pair of shoes that she ordered online.

“There were these baby blue Vans and they didn’t have them in the store; I think they were not in season anymore, so I got them at Zappos and they were 20 bucks cheaper, and I was really excited when I got them,” she said.

This is just one of many items Satchivi has purchased online instead of in a conventional mall. Satchivi said she prefers the accessibility associated with online shopping, and she is not alone. According to an August 2014 National Public Radio (NPR) article, teen “mall culture” has been decreasing and is gradually losing its iconic significance in America.

States, especially in the Midwest. Within Indiana, six shopping centers have gone out of use, including Lafayette Square and the Eastgate Consumer Mall in Indianapolis. What was once a hearth for dining, entertainment and consumer goods seems to be slipping from American culture.

“I think they closed because they didn’t have enough money. (Similar to) a few years ago we had the recession, so people weren’t going shopping as much,” Satchivi said. “There’s not as much that’s offered anymore; most malls don’t have movie theaters anymore, and they’re mostly geared toward little kids.”

When Satchivi was around 9 years old, she would frequently visit the mall. In contrast, she currently goes there about once every three months. She said this is due to teens being more likely to socialize at local festivals or restaurants, where there are more entertaining activities. Not only are malls being replaced by teen-centered venues, but the concept of walk-in sites is also becoming outdated, according to social studies teacher Michael OToole, who demonstrates social trends and patterns in AP Human Geography.

“It has to do with a lot of brick-and-mortar stores, as they’re called. Stores you actually go in. One, people don’t go to buy there anymore as much; they go to window shop a little bit. With the ease of online shopping, it’s just so much more convenient, and then, teenagers don’t buy a lot of the same things that they used to. When I was in the ‘90s, we went and (hung out) at the mall all the time. But you would go to the CD store (or) underpriced movie stores,” he said.

This type of generational difference is illustrated in the fact that some teens don’t perceive the mall as a social space.

“I guess most people think that the mall (has) nothing to do, so it’s kind of boring,” Satchivi said. “You can get the same stuff online that you can get in the mall and even more, so if you’d rather be doing something else, it’s better to go online and not waste time.”

According to NPR, e-commerce such as online shopping has changed consumer habits, gradually making malls obsolete. Despite once being the manifestation of American life, malls are losing their role in an increasingly mobile society that places emphasis on time.

Overall, the convenience of online shopping has contributed to Satchivi preferring it to physically going to a mall.

“Being in high school, you don’t have a lot of time anymore. And then I also swim, so I don’t find a lot of time to do many things, so it makes it easier,” she said.

Junior Evin George, who goes to the mall once a month, said he still favors physical department stores for their palpability.

“The thing about shopping online is that when you see something you like and you order it, you don’t exactly know that it’s going to be like it is in the picture. But if you’re there in the store you can actually see. Especially clothes; I don’t think it’s a good idea to shop online for clothes, because you need to try them out. You need to see how it looks on your body,” he said.

Although such stores present an undeniable physicality, this aspect may be the reason why teens are considering malls to be passé. Among designer stores and cheap food courts, there is suburban sprawl and failed plans for redevelopment contributing to the decline in mall culture, according to a June article by The Guardian. Consequently, people, specifically youth, are looking for entertainment in amusement parks and carnivals, as stated by Satchivi.

OToole said, “At places like Carmel, there are so many different student activities and clubs, and I think that’s taking up a good portion of time.”

Along with saving time, Satchivi sees many other benefits to online shopping. For her, it is about having a wider selection of products available to purchase.

“I shop at my favorite (online) stores. Especially here, since we don’t have really big stores; we don’t have all the clothing so it’s kind of a hit-and-miss at the mall but online you get exactly what you want,” she said.

Although George prefers malls to online shopping, he and Satchivi both enjoy the diverse selection both mediums provide.

“Because (the mall) has so many different stores, it pretty much has everything you need to survive, in one big area. It’s a good social gathering area too. You get food, clothes, electronics, and everything in one area. You don’t have to drive around everywhere,” he said.

It is ultimately up to the consumer to decide whether malls are suitable for shopping. For several generations the mall has been a trademark of the American lifestyle; however, as with all trends it has lost some of its significance. According to Satchivi, many people she knows buy most of their clothes online.

“There are just more options and promotions online,” she said. “People find stuff that is either customized or really unique online and you don’t really see many things like that at the mall.”