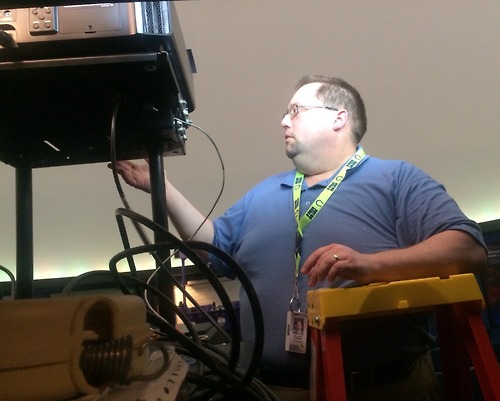 March 2014: Astronomy club sponsor Keith Turner adjusts the video projector, so there will not be any light leaks during a show. According to Turner, the CHS Planetarium Club will host a show on fall skies Oct. 2 at the CHS planetarium. JULIE XU / FILE PHOTO

On Thursday, Oct. 2 at 7 p.m., the Carmel Planetarium and CHS Planetarium Club will be showing a presentation on the fall night sky. Tickets are available at the CHS Bookstore from 8 a.m. to 3 p.m. and cost $8 for adults and $4 for children, seniors and CHS students. The planetarium will be used to simulate the night sky in early fall. Astronomy teacher Keith Turner will be conducting the presentation.

“This time of year is when the weather breaks and there are less humid days, which is better for observing,” Turner said. Turner added that the Pegasus constellation will be visible early in the evening during this time since nights are beginning to be longer than days.

During the presentation, all light pollution will be eliminated from buildings, street lamps and the city of Indianapolis.

According to Turner, the presentation will “show (viewers) how many stars they could see if we had 100 percent everything working in our favor.” Turner said 5,000 stars and various deep-sky objects including the Milky Way will be visible.

Turner said if it is a clear night, volunteers from the Indiana Astronomical Society will set up telescopes outside the high school near the flagpole.

“If everything worked perfect, people would come to the show and then after the show, they would head out at about eight o’clock and we would start observing,” he said.