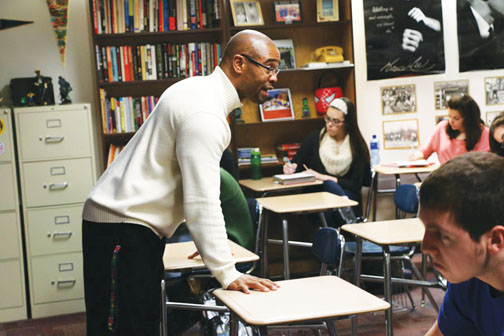 Kenneth Browner, U.S. History teacher and African American, teaches his class. Browner said that lack of diversity was a factor in his decision to come to CHS.

As Kenneth Browner, U.S. History teacher and African American, contemplated whether or not he would take the teaching position at CHS, he had many considerations to make. Three years after making his momentous choice to teach at CHS, Browner recalled the role racial diversity played in his decision.

“I remember talking with my former department head at (Lawrence North High School), and he stated, ‘as much as we need you here, they may need you more at CHS,’” Browner said. “He was trying to say that a positive African-American male needed to be seen at CHS to help break the stereotypes that social media has misconstrued about the African-American male.”

Browner is among the 18 percent of non-Caucasian teachers in U.S. public schools, according to a May 4, 2014 TIME article. At CHS, he is one of less than 4 percent of teachers for the 2014-15 school year that

John Jacobson, the dean of the teachers college at Ball State University, explained one of the reasons why he believes such a lack of racial diversity among teachers occurs.

“One of the biggest factors to look at is the diversity makeup of the current teaching force,” Jacobson said. “If diversity is lacking, so are the role models that would inspire diverse students to pursue teaching as a profession—it’s a chicken and an egg problem. With a diverse teaching force, students from every demographic area can look at their teachers and say, ‘Hey, I’ve got great teachers who are like me, and I’d like to be a teacher just like them.’”

According to Jacobson, a lack of racial diversity among teachers can make it more difficult for teachers to relate to students, which impacts students’ learning experiences.

Nonetheless, he said the decision to hire teachers in the Carmel Clay Schools Corporation—an Equal Opportunity Employer—is not based on race because, according to Newman, classes generally do not comprise solely one ethnic group.

Thus, Newman said, “Race doesn’t factor into the hiring here…so what we do, what our process is and what my job is to do is to find the very best person for the position, and that person obviously is going to have a race, a gender, but none of those things matter as long as they’re the best person for the job.”

Junior Tyrah Chery, who describes herself as “Afro-Caribbean,” moved to Carmel and began attending CHS as a sophomore, said she has never had a non-Caucasian teacher at CHS. Chery said teachers of a different race from hers may not be able to fully understand her situations.

She said, “I feel as though (with teachers of different races from mine) it won’t be a place where the teacher has a similarity towards me, as in they completely understand what I’m talking about, and it’s something that they’ve always heard or something they’ve always experienced, because even though the teacher may have had their own trials and their own tribulations, situations as that, it still seems as though they won’t be on the same level of thinking and experience that I have gotten from my life.”

Browner said he thinks students may open up a bit more to teachers of the same race because students may believe the teacher understands their issues due to their similar backgrounds.

Browner said, “I was really surprised at how the African-American students came to talk with me and tell my how glad they were that I was teaching here.”

Chery, nonetheless, said with teachers of different races from hers, although they may not fully understand her situations, she is able to spread more awareness of racial diversity as well as her experiences to others.

She said, “I’ve been able to state (racial diversity) blatantly as something that I feel people should be aware of … so when you’re speaking to a teacher who is of a different race than you are, you’re spreading what you have experienced beyond the spectrum of the race. It’s opening up the eyes of someone who has not experienced (it).”

However, aspiring to become postsecondary professor, Chery said the low proportions of racially diverse teachers may make it harder for her to become a teacher.

Chery said, “There’s the fact that the majority of teachers (in the United States who) are Caucasian … it’s created blinders that specifically teachers have to be that way or teachers have to be a specific type of person … for me, I always have to remind myself that there are people like me who are teachers. There are a lot of teachers who are not Caucasian. It’s just I haven’t met them yet, and I have to create this aura of optimism because there are times where I feel as though I shouldn’t do this. Because why? Because it’s gonna be harder for me than other people, which is the sad truth because that’s just how society has created us, to believe that specific occupations are for specific types of people, and that’s not how I see … I feel as though, for me, to become a teacher, it will help me, and it will help many other people break those blinders to see a wider spectrum of everything.”

Even with the current lack of racial diversity among teachers, Browner said one of the reasons for which he came to CHS was to change perceptions regarding race. He said he believes he has been able to impact students.

“I think we get so focused on what the social media portrays that we begin to stereotype people and lump them all in these categories, and I think with me being here and my students seeing how I act and behave and do things as a professional kind of takes away that not everybody acts the way they seem to be portrayed on their culture … I just think my students have a better opinion of me and how they see me as their teacher and as a person of color,” Browner said.

“If we had a broader spectrum of non-Caucasian teachers and if we had a broader spectrum of teachers who are from different cultures, are from different places, then we can open up our minds more, rather than have a teacher who is part of a minority so that when we do see this specific type of teacher, we put them into that little box of stereotypes,” she said.

Soo Han, the director of orchestras, the performing arts department chairperson and Asian, said racial diversity among teachers can also provide a greater exchange of knowledge and deeper experiences for

Han said he tries to incorporate aspects of his cultural background into his classes. “In a very little way,” Han said, “I feel a little bit of responsibility to contribute my unique experience and my unique perspective and my unique cultural upbringing and contribute those experiences to this melting pot of academia that we call (CHS) here, so whenever the opportunity presents itself, I look for ways to give back and share my experience as … someone that grew up as Korean-American, someone that can talk about Asian experiences.”

Browner also said he includes some racial issues in lessons. “(In) my courses, we look at a lot more racial issues and deal with different cultures, and so, we just don’t deal with what’s in the curriculum itself,” Browner said. “We look at a number of cultural things that may have changed history in that regard.”

However, both Han and Browner acknowledged that in the classroom, race does not matter with teaching. Han said, “I think good teaching is good teaching no matter the race or the gender of teacher, and I think bad teaching is bad teaching regardless if you’re a minority teacher or (not), and does race play a factor? I don’t think so.”

Additionally, according to the May 4 TIME article, some concerns have been raised regarding the lack of racially diverse role models for students with education groups wanting action politically to introduce more racially diverse teachers.

For Han, teachers all are responsible for being good role models, but he said he also considers himself a role model with his race.

“When we talk about teachers as role models, I think of myself as a role model for students first and foremost as a teacher, and then, I guess, thinking of myself as a Korean-American teacher role model is kind of secondary,” Han said.

Han, nevertheless, said he does not have any concerns about racial diversity at CHS. “I think (the teachers, administrators and students) are so keen and aware and sensitive to all those different diversities and different races that exist here in school, and then, not only are they sensitive to it, they celebrate different cultures and encourage different ideas and things like that.” He added, though, that there could be more diversity at CHS.

Chery said, “So if there was an equality between the Caucasians and non-Caucasian teachers and the ability for students to have both of these perspectives, then that would open up so many doors for education and the future of education.”