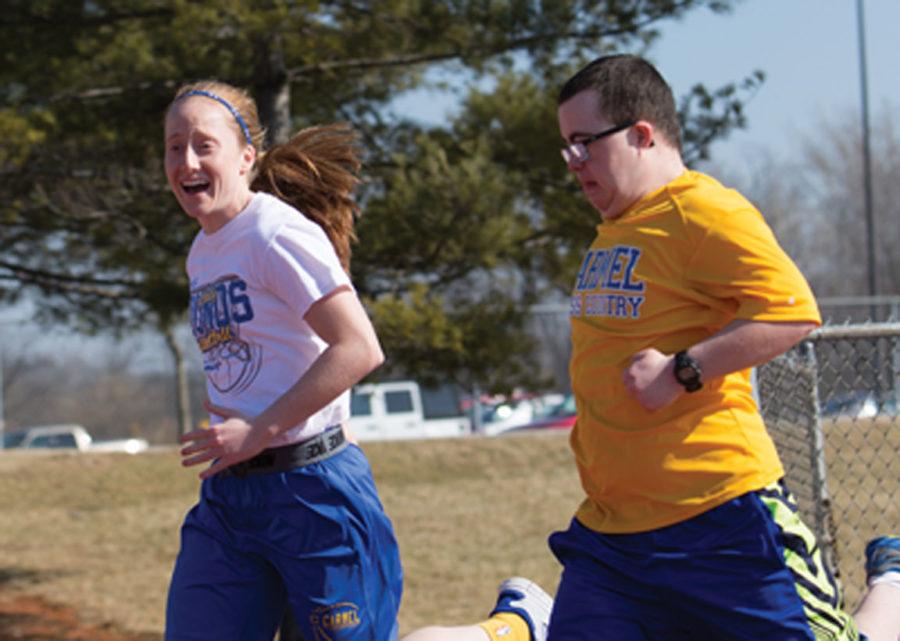 How did you first get involved with Special Olympics?

Why did you get involved?

Well, I’ve always been involved with Best Buddies and such, so that’d be a really great opportunity to meet new people and kind of get on the ground for this new partnership and work with people and kind of create a different atmosphere in schools of social acceptance and inclusion.

How did you get selected for the Youth Activation Committee?

Going into my senior year, I went to a National Summit with other people from all over the states. … There, we learned about the National Youth Activation Committee, and we gave different proposals, and we were asked to apply, and after, (my partner, Mitch Bonar, Special Olympics athlete and Noblesville High School student, and I) applied as a pair. We got accepted, and there’s less than 20 people on it, so it’s really selective.

What does the committee primarily do?

(It) promotes Project UNIFY, which is to unify students with and without intellectual disabilities in sports. And then they have different subcommittees, and then subcommittee I’m on is the Play Unified. (For example,) we have unified track here, which partners Special Olympics athletes with IHSAA athletes, and we just work in different sports and different proposals to get people involved and to play unified together.

What have you done so far while on the committee?

So far, we’re putting together presentations and different projects that will come into place this spring, so as a committee, we went to Washington, D.C. in the fall to meet and work together on projects, (but) I had three basketball games, so I couldn’t go so I Skyped in during the meetings, but then we’re going this April to Seattle to finalize again. We’ve come up with different projects (and) proposals to release out to the entire United States on how to get your schools involved and your communities involved with Project UNIFY, and then we’re now working on making proposals to go to the World Summit, which is in July. So I’m working on proposals for that. My proposal for the World Summit which I’ll be turning in this March is that (since) there’s a problem that do unified sports in high school but then never do anything afterwards, so we’re coming up with an activity and a program to institute into colleges so that people can still have the opportunity to play unified in college and not just in high school.

What do you most enjoy about serving on the committee?

I think the best part about it is that we’re working with the athletes. You learn a lot and get to hear a lot of inspirational stories about people overcoming a lot of adversity to be where they are now, and I think the coolest part is being able to play with athletes that never thought they got the chance to play for their high schools.

Have you or your committee planned any local events coming up?

We’re going to do an R-word campaign, like a Spread the Word to End the Word, here at Carmel, and then we’re also starting our unified track season, which is going to come up, which is a new IHSAA sport that was added, and so we’ll compete in those meets and stuff. We’re hoping to create a final activity in the spring as a conclusion, but on the National YAC, I’ll be going to Seattle afterwards, and we’ll be giving our presentation to people from Special Olympics North America about how we want to implement Project UNIFY in all of the states, and hopefully by then I’ll know if my proposal got accepted and funded, and then in July hopefully I’ll be going to the World Summit in L.A.

What do you think the most rewarding thing that someone can gain from participating in one of your activities?

I think that the greatest thing is just seeing the joy on their faces. Getting to work with them is such a great opportunity; for instance, on Friday (Feb 21), we had a unified basketball game that we hosted here, and it was great to see the fact that the athletes always want to represent their school, and being able to play on our home court with us, it’s cool because they love sports as much as us but don’t always get the opportunity, so it’s just great to work with them. And we have a committee here that has IHSAA students and Special Olympics students that I head up, and we run these events and get to work with them, and we reach out to play unified track and such. It’s great to be able to work with these students that sometimes aren’t included or not really seen in the halls and just give them the opportunity to experience high school just like everyone else.

What do you anticipate to do in the future on the committee?

I can serve in college, so I’ll probably serve on the National YAC in college. Here, I’m probably working on a local, high school realm, and then hopefully when I get to college, I’ll be starting opportunities in college and then create something called Special Olympics College, which is basically like Project UNIFY, so, like here, we have unified sports, so in college you would take the athletes or the intramurals and then have them play unified with the local Special Olympics in Tippecanoe County, where the West Lafayette Purdue is. They’re having trouble getting stuff started: they have people wanting to do it, but they don’t have anyone heading it up in colleges, so I want to work with having a unified atmosphere in colleges too. So in college, I plan to continue working with Special Olympics and unifying and then creating a program, especially at Purdue when I go there. You know how a lot of people in college don’t play sports, but they played sports in high school? So (I’d like to get) them to partner with local Special Olympics counties, and they would play unified and such.

What other ways do you think can CHS students get involved?

We host some fundraisers in the fall, so in fall, we have the Plane Pull, and we do a torch run, and in the winter our big one is the Polar Plunge, but we have a lot of awareness events throughout the year that we need more participation. Going to unified track, like just joining unified track or just coming out to a meet, coming to our games, participating as volunteers and if they are in an IHSAA sport, then they can go to their coach and ask them to nominate them to be on our committee. We have two representatives from almost every sport here, and we always are looking for, when people graduate, more people to come and join and want to volunteer and work with Special Olympics. Because it’s kind of on the ground floor right now because this is the only (the) second year for the committee and only second year for the partnership, so five years down the road, it could be really big.

“Champions Together,” which is the coined term of the IHSAA partnership with Special Olympics, it’s not just to play unified. It’s like a lifestyle change, to include everyone, not just people with intellectual disabilities, but everyone. And if you continue that through your life, to constantly serve others and volunteer, it’s a great opportunity.

Click here to read an exclusively online Q&A with Noblesville High School senior Mitch Bonar, who, together with Abel, also serves on the National YAC.