Carpets of E-halls to be replaced with terrazzo during summer 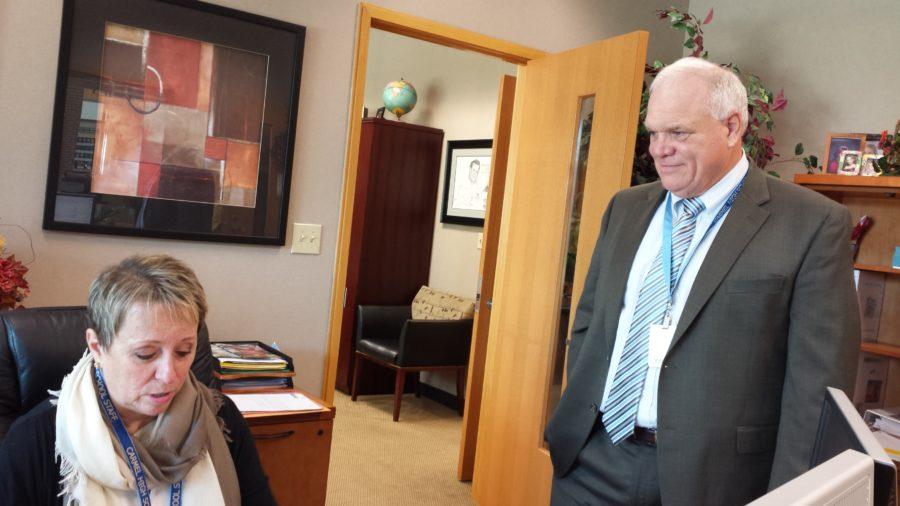 Principal John Williams talks to secretary Jan Brown. Williams said the E-halls carpets will be replaced with terrazzo during the summer. HELENA MA/PHOTO

“Every thirty years, these buildings go through major renovations. Between that, you have things that don’t last thirty years, like carpet, so somewhere in the middle, you replace that,” he said.

He said the reason for the switch is that terrazzo stays more aesthetically pleasing than carpet for a longer period of time.

“When it rains and the carpet gets all wet, it looks horrible,” Williams said. “For terrazzo, you put a coat of polish on it, and it looks good as new.”

“I think it’s definitely good since the carpet gets stains in them; especially schools this size, it gets messy. As an athlete, there’s a lot of workouts that go on up here so (changing to terrazzo) would be nice since we won’t have to do push-ups on the dirty floors. It would also be easier on our janitors since the floors would be easier to clean,” he said.

Greaser said that a potential downside to going from carpet to terrazzo is that athletes who prefer to run on carpet no longer have that option of running on carpet in the E-halls.

“I know track and baseball run up here a lot. It’s a little bit easier on athletes to run on carpeting than it is on hard flooring since it’s a little softer and there’s less stress put on your leg. But overall, the positives of having an easier-to-clean surface far outweigh the negatives,”