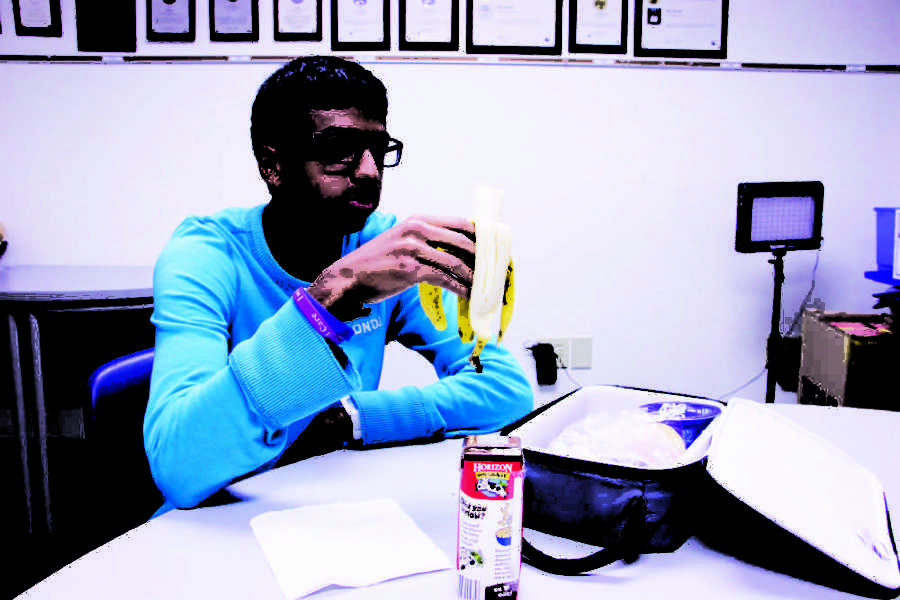 When sophomore Mitch Korolev was just a middle schooler, he read a popular book on the way animals are treated titled, Chew On This. Ever since then, Korolev vowed to never eat meat again, in addition to observing kashrut, a set of Jewish dietary laws that regulate food consumption. With Thanksgiving rapidly approaching, Korolev has to take into consideration all of his dietary restrictions in order to participate in eating traditional Thanksgiving food while being cautious as well.

Korolev’s grandmother is neither Kosher nor a vegetarian, and when Korolev attends Thanksgiving at his grandma’s house, his family, who is not vegetarian but does follow kashrut, has to make an effort to bring their own dishes and make sure to ask which foods were made using ingredients labeled with the kosher symbol.

Korolev said, “Holidays like Thanksgiving are definitely the hardest to avoid because there is just so much food and temptation, so at that point it’s just kind of your own will and how much you really want to do it.”

Korolev said he encourages people who are kosher to look at the symbol to make sure they know if the turkey is executed correctly.

“Not many other families care what store to shop at or who they got the turkey from, whereas our family has to be a little more careful in order to keep kosher. Honestly it’s just finding different foods [to eat] that is the hardest part,” Korolev said.

Senior Olivia Morfas, who was diagnosed with Celiac’s disease in 7th grade, said she also understands the extra effort Thanksgiving dinner requires. Morfas’s mom has to prepare gluten-free foods in order for her to enjoy Thanksgiving.

“My first Thanksgiving was kind of tough because we were eating with my dad’s family who does not have celiac disease. We did not want to make a big deal out of it, so I could not eat pies or rolls, which are my favorite. There were a lot of things that I missed.”

“I did not feel left out, until desserts came around and then I felt like I was really missing out. Food is a social thing and it was kind of awkward to be the only one not partaking,” Morfas said.

Nutrition and wellness teacher Sonya Brown said, there are many tricks to creating a vegan, vegetarian, gluten-free or any other eating preference and still be somewhat “traditional” in the items people prepare.  For example she said via email, “Eating a Tofurkey instead of turkey or creating your desserts out of almond or coconut flour instead of all-purpose flour for who are gluten-intolerant.”

“Always try to find a way to make things work. Maybe do not ask people to go out of their way, but I would say just prepare something yourself, look up some recipes and try new things.

Senior Neil Shah said he understands modified Thanksgiving menus because of his religion, Jainism, which requires vegetarianism as a part of its non-violent philosophy. According to Shah, Jainism is based on five key pillars, or key values that help dictate values of life.

He said, “I guess the premise of Thanksgiving is also just the family and friends aspect rather than just the food. We’ll always get our family and friends together and we’ll do something either as simple as we all bring some type of food, whether it be Indian food or American food, anything in between, or we’ll just order pizza, something like that, but it’s just the fact that we’re with friends and we just spend that time together.”

There are some students however, like junior Trenton “Beef” Franklin, who hold the turkey eating tradition very close to their heart. Franklin said he enjoys meat so much, he even prefers to be called “Beef.”

The Franklin family, who has been traditionally known as a group of meat lovers, has a Thanksgiving centered around the smoked meats they eat. According to Franklin, they typically enjoy two smoked hams and one smoked turkey.

“I see no reason to be a vegetarian,” Franklin said. I see vegetarians and I think, ‘Wow what a horrible quality of life, because they don’t have meats.’ Meats are my favorite. I love meats.”

The essence of Franklin’s Thanksgiving is largely centered around meat, something Shah and Korolev both live without.

“It’s given me hearty poops and bad gas, that’s how (meat eating) has  affected me,” said Franklin.

Regardless of modified Thanksgiving restrictions students may face at CHS as a result of religion or other preferences, according to Brown, Thanksgiving is a time to be thankful for what you have rather than the food you cannot eat.

“Thanksgiving should not be only about the food, “ Brown said. “But about celebrating all we have to be thankful for. The holiday should be more focused on why we are eating our favorite foods together and less about what we are eating.”

For Shah, being vegetarian during Thanksgiving is not that much of a struggle because it is part of his identity, and he doesn’t see the lack of meat in his diet as an absence.