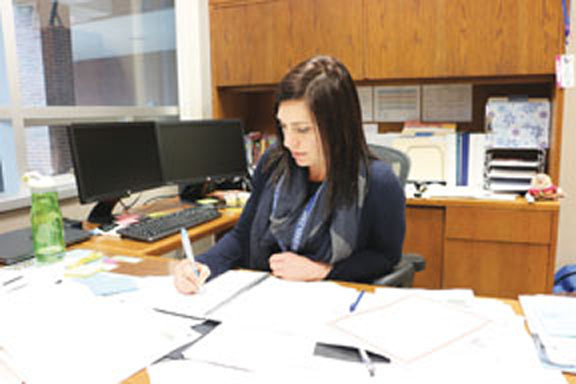 Over the past four years, the Carmel Clay school district collected data from surveys and found that technology is now a high priority. According to Assistant Principal Brooke Watkins, the district will implement a “Learning

Management System” (LMS) in 2016-17 in order to improve and update the technology currently in use.

“A Learning Management System is basically like a classroom online,” Watkins said. “(It’s) an online classroom environment, but it’s a tool to manage not only classroom activities but communicate with students and parents. There’s calendar features. There’s assignment features. You can actually submit and upload assignments through the system.”

The district will choose between two LMS’s, Canvas and Blackboard. The program will be accessible on personal and school computers. The committee should have a decision in January, according to Watkins.

Watkins said this will assist teachers, students and parents by consolidating information about classes into one platform. Watkins also teaches at Ivy Tech, and her students don’t turn in hard copies of papers; they do assignments through Blackboard.

According to Watkins, this update will assist teachers by moving grading into one platform. For example, a grade given on Edmodo is visible to the student but the teacher must transfer it to the gradebook. However, an LMS would consolidate grading on one site.

Junior Ella Gottschild will graduate with the International Baccalaureate (IB) diploma and said her teachers don’t use many different online platforms, but she thinks it would help.

“Before you take IB, you’re told this is rigorous coursework, and you’re gonna have a lot to do, a lot to juggle, a lot to handle, and you know, we’re not in college yet. So we do need a few more reminders and just a little bit more assistance,” Gottschild said.

Watkins said in order to test out the different LMS’s, teachers can voluntarily participate in beta testing this semester. Teachers can use one or both of the programs to familiarize themselves with them. They can include students as well. Watkins said this will help work out kinks before the program is released to everybody.

Freshman Drew DeLor said online components to school were used less in middle school, but he still doesn’t use many. The only educational website he uses is Edmodo, but he said he is not sure it helps him as a student.

DeLor said, “It’s never really helped me too much. . .but I think it’s helpful for people who need more review.”

All students will use an LMS next year as a part of the district’s plan.

Watkins said, “The district’s committed to looking at what we need to do with technology to help be progressive, and not just in what we do in the classroom but to help students prepare too, because a lot of college classes have online components or online classrooms.”