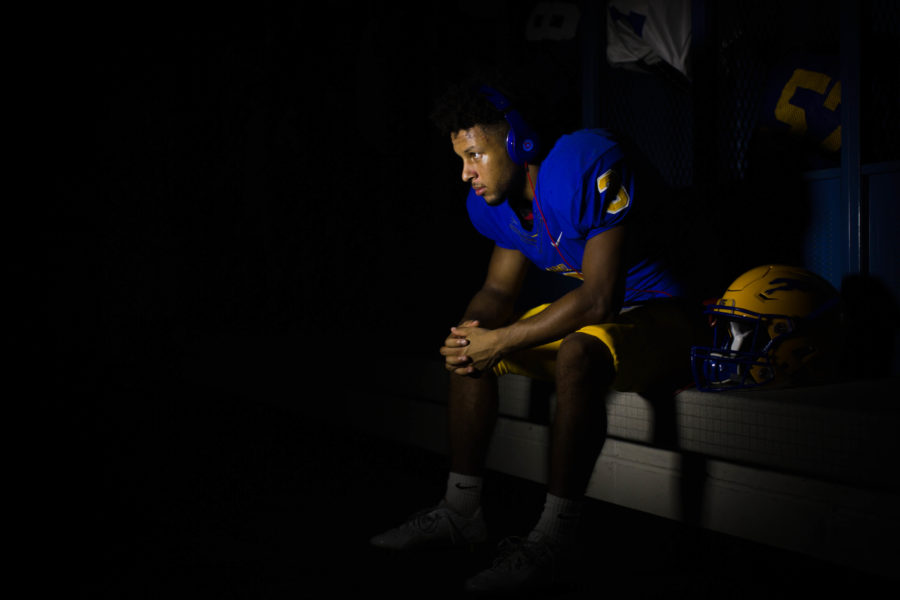 Senior Jalen Walker gears up for a game by listening to music. Music is a popular form of mental training, especially before games.

Dr. Ciarán Dalton helps athletes of all levels every day to overcome the mental blocks that often hold them back from reaching their physical goals. He has a doctorate in clinical psychology, which means that in his private practice, which is located in Philadelphia, he uses methods such as mindfulness, meditation and visualization to mentally prepare athletes for the game.

Dalton, who is also an assistant soccer coach at Swarthmore College, frequently uses visualization in his practice and said it is very effective in building up an athlete’s confidence, but only if done right.

“(Visualization) has two benefits: it helps with the brain chemistry, the neurons in the brain, but it also helps with confidence. Athletes tend to do it incorrectly and the two biggest mistakes are they’ll do it, and they’ll imagine it two ways. Number one, slow motion, and number two, from a third person perspective,” Dalton said.

According to Dalton the reason many athletes use incorrect visualization techniques is because they think they look better in their head, but if an athlete wants to train his brain the right way, he has to do it in first person at game speed. For example, Dalton said if a soccer player goes to take a penalty shot, the neurons in her brain fire in a certain pattern. She does it over and over again, and those neurons get stronger and stronger. If that player lays down in bed at night and takes 15 minutes to visualize herself taking penalty shots over and over again, those same neurons fire.

“When neurons fire over and over again they get stronger and stronger and they become more automatic. It gives athletes an opportunity to train their brain, even when they’re not on the field,” Dalton said.

Research supports Dalton’s views. In a 2014 study, Dr. Judd Biasiotto, a professor at the University of Chicago, split a team of basketball players into three groups, all to be tested on how many free throws they could make. Biasiotto first administered the same test for all three groups to establish a baseline. Then he told the first group to only practice one hour a day, the second group to only visualize making the shot and the third group to do no preparation of any kind. A month later, the results showed that group one improved by 24 percent, group two by 23 percent, and group three by zero percent after taking the test again. Visualization proved to be almost as helpful as physical practice. When combined with practice, an athlete’s abilities are limitless, according to Dalton.

As athletes work on their mental training, there are different exercises they can do to enhance mental performance. The more traditional is cognitive behavioral therapy (CBT). CBT is widely accepted by therapists who are treating people for the traditional reasons that they go into therapy such as anxiety, depression and anger management.

CBT focuses on how people’s thoughts, feelings and behavior have impact on one another. In sports, athletes may miss an open net, an easy shot or run a poor race. The athlete will have that initial, normal, frustration and disappointment, and then the thoughts come into play; those thoughts are often negative self-talk.

Sydney Baines, soccer player and senior, said she experiences negative thoughts or frustration during games and it affects her play, although she tries to remain positive for the team.

“I think my thoughts are mostly positive. I try to stay positive and encourage myself and my teammates, and if it’s negative, it’s after I made my mistake. After I make a mistake, I try to think of what I should’ve done, not what I did wrong, so I also try to be optimistic in that way,” Baines said.

According to Dalton, for athletes, self-talk can either boost their performance or cause them to perform badly depending upon if it’s positive or negative.

In an article by Sports Psychology Today, “Positive self-talk enhances confidence through the use of success driven statements about performance.” Athletes should use positive self talk statements to boost confidence before competition, like focusing on the techniques they have done well in the past, just as Baines practices during games.

A mistake can have a big impact on an athlete’s thoughts during a game. Jalen Walker, varsity football player and senior, said he experiences these thoughts every time he makes a mistake on the field.

Baines said she feels the same way, but knows she must try to stay positive for her team.

“I usually just try to take a step back if I can and just breathe and refocus on what I should be doing,” Baines said. “Usually I get overwhelmed if I feel I’m making mistakes, and if I let in a goal, that’s really hard to get over, but I just focus on, in order to get that back, to prove that was just a one time mistake and it won’t happen again.”

Pre-game rituals vary from athlete to athlete. Some scream and shout with their teammates, while others sit down in a quiet place and focus on their breathing to get “in the zone.” Colin Altevogt, head coach for the men’s cross-country team, said getting in the zone means focusing on the moment and not thinking too far ahead.

Calvin Bates, men’s cross-country runner and sophomore, puts time aside before a race to come to realization with himself.

Bates said, “Mental preparation, I come to realize what this is; this is important, you’re running for your team, I think about if I don’t go out there and run the hardest I can, I’m not doing anything to help the team.”

Freshman linebacker coach Chris Laigaard said he has a similar way of thinking, which he applies to his players before games.

“One of the things I always tell (my players) is, before the game, you need to be quiet. You don’t need to be up horsing around, and roughhousing and whatever they want to do,” Laigaard said.

Laigaard also works on visualization techniques with his players and said he agrees with Dalton.

“One thing I always tell (my players) is, envision yourself being successful,” he said. “It’s not that you got there and you know you made this big, smack, hit on somebody, it’s you came down slow and controlled like you were supposed to. You fit, you disengage, you do everything right and you do it perfect. I think enough studies have been done, that if you envision yourself being successful, you’re more likely to be successful.”

Walker has his own way of getting into the zone. “I usually just listen to music, try to get myself psyched up to play a game,” he said.

In the practice of sports psychology, the psychologist may use a method known as “mindfulness,” which can have different forms and ways of practicing it. In Dalton’s practice, he said he usually sits the athlete down in a comfortable position and lets them just focus on one thing.

“With a lot of the athletes that I’ve worked with, we’ll just sit in my office and listen to a song. The easiest way to describe it is breathing mindfulness, so you sit in a comfortable position, close your eyes and focus on one aspect, and for just one minute, that’s all you do is focus on it,” Dalton said.

According to sports psychologists like Dalton, the future of sports psychology lies within the coaches and players of tomorrow as the concept continues to grow and be studied.

Dalton said, “Sports psychology is a really fascinating field. I love reading about it and learning more about it every day. I love it. I get to talk about psychology and sports. It’s really complex and…it’s really individualized. You have to know the athlete really well; you have to develop that relationship, understanding that trust and support needs to be there in order for athletes to be able to make some means in the mental side of the game.”