More than a game, for some sports is family. 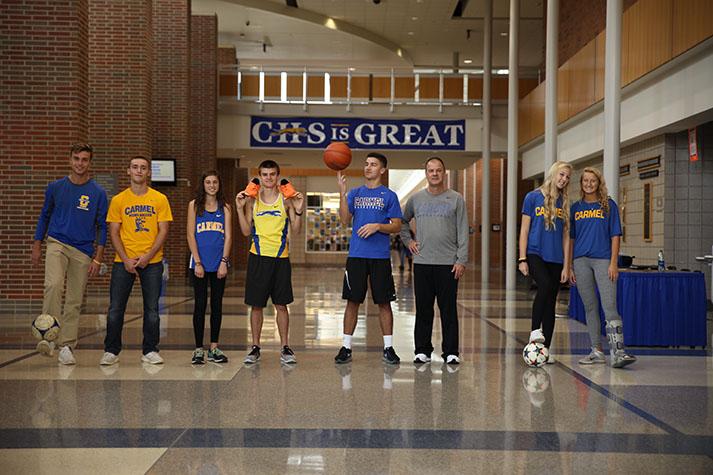 In most athletic situations at school, families can participate as spectators, watching their sibling or child compete from the sidelines. However, for a few at CHS, being involved in sports is their opportunity to compete and grow with their family members on the same court or field. For these family members, sports gives them a common activity and related interest to talk to one another about and bond over.

Defender and senior Harrison Adams, along with his younger brother, defender and junior Cameron “Cam” Adams, both play on the men’s soccer team together on the backline.

“It’s just cool because it’s something that will never happen again. We just get to do all this stuff together and go to practice together and train. It’s just an awesome experience,” Harrison said.

According to Cam, the emotional support between the two is just as important as the physical aspect of playing on the same team.

“I like being able to know that I can count on Harrison being there in case I make a mistake. It’s just good to know that I’m supported,” Cam said.

Support can come in different forms other than making up for mistakes. For Ali James, soccer player and senior, she can sometimes be critical of her younger sister Kelsie James, varsity soccer player and freshman, something that cannot always be done with other teammates.

Ali said, “I’m more honest with (Kelsie). I would never tell another teammate something critical, but if I need to tell her, I can be straight up with her.”

For Kelsie, being able to work well with her sister is something she’s come to love and appreciate.

“Ali helps me blend with the team, and it’s nice to know someone really well,” Kelsie said.

Most athletes can agree that team chemistry is crucial to winning; Harrison and Cam both said they have good chemistry on the field with each other and with their teammates.

“I think there is an advantage to playing with my brother,” Harrison said, “We play three people in the backline. It’s me, Cam and [senior Grant Gold], someone that we’re really good friends with, so we’ll just connect really well, so we have a really good defense that’s hard to get by.”

On the same note, Cam said, “It’s easier having a sibling on the team. For me,

I already knew all the juniors, but for the seniors, Harrison kind of helped me make friends with them. Once you’re friends with everybody, you play better, so it’s just the connection thing again.”

In an individualized sport such as cross-country, it can be difficult to relate to a team setting during competition time. Runner and sophomore, Calvin Bates, and his sister, runner and freshman Phoebe Bates, said they find ways to bond by talking about each other’s sport lives.

“It’s fun because you both have something you can talk about. Sometimes a lot of siblings don’t have that. To be able to relate to that is cool,” Calvin said.

Phoebe said she agrees that playing, or in this case running, the same sport has brought the two closer together by giving them something in common to discuss.

“Before we did cross-country, we never had anything to talk about at the dinner table, so instead of just sitting on our phones, we can actually bond now,” Phoebe said.

Scott Heady, men’s basketball Head Coach, and his son, point guard and sophomore, Luke Heady, share a different type of relationship in sports, one even more uncommon than in siblings: as coach of the basketball team and father to one of the players. Heady said he stresses making sure that everyone has the same opportunities on the team while also being a supportive parental figure to his son.

“Expectations, I think, just have to be high and Luke has accepted that. He doesn’t get any special treatment or want to be treated differently,” Mr. Heady said. “Of course when practice is over and we’re at home, we try to leave everything there (at the gym). We don’t want to take things home. Not that we don’t talk about things every once in awhile, like any dad and son would.”

Being the coach’s son isn’t always easy for Luke, but he said he knows what his dad expects of him and what he has to do to prove he belongs on the team.

“Sometimes people try to make things difficult. They try to tell you that you shouldn’t really be on the team – that you’re only on the team because ‘your dad is the coach.’ You just have to prove them wrong,” Luke said. “Work harder. That’s how it is.”