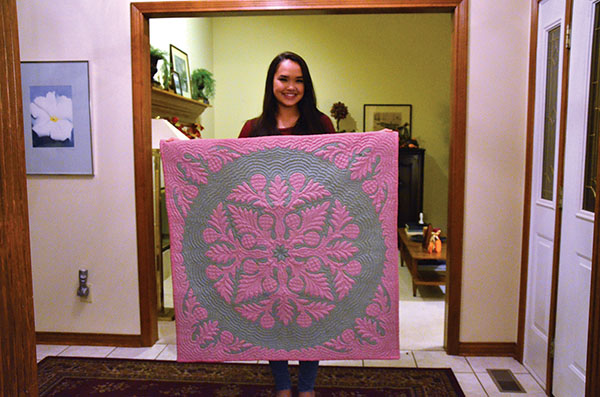 Hawaiian and Junior Catherine “Kate” Adaniya holds a family blanket. The pattern on the blanket represents many beliefs and traditions in Hawaiian culture.

Walt Disney Animation Studios will release a new princess movie next Wednesday titled “Moana,” which is about a Polynesian warrior princess who joins the demigod Maui to become a master-wayfinder to help save her people.

Directed by the duo Ron Clements and John Musker, “Moana” has been praised by entertainment media for both casting Dwayne “The Rock” Johnson and newcomer Auli’i Cravalho, who are Samoan and Hawaiian respectively, as well as extensively researching cultural backgrounds of the South Pacific to ensure an accurate depiction.

According to BoxOffice Pro, “Moana” is expected to gross an estimated amount of almost $400 million if the soundtrack, composed by “Hamilton” creator Lin-Manuel Miranda, meets the musical success of “Frozen.” However, amid all the positive press, there have been some controversies surrounding the film that have fans wondering about the impact “Moana” will have on Pacific Islanders.

The backlash “Moana” is receiving surrounds the figure of Maui, who is large and reflects the size stereotype of Polynesian men.

However, Hawaiian and junior Catherine “Kate” Adaniya said she thinks such stereotypes being represented in the film will not harm its reception to a great extent.

“I feel like, yes, they are portraying a stereotype, but if you look at all the other movies, everyone is being portrayed with certain stereotypes, so I think it’s really difficult for directors to show people properly because they’re just doing what they associate with people and what sells,” Adaniya said.

Adding to the controversy, Disney manufactured a Maui costume for children, but then took it down from the store website because of public disapproval, with many accusing it of using “brownface,” which is seen in the brown-colored skinsuit that is a part of the costume with tattoos covering the suit.

Indonesian and junior Leonard Cahya said, “I feel like more people will get this misconception (of) who Pacific Islanders are based on this costume, but (they might) not understand the stereotype. However, they might learn more about the kind of culture of the Pacific Islands from the movie.”

On the other hand, Adaniya said she has witnessed Pacific Islanders feeling offended by movies that disrespect their culture. In fact, according to Adaniya, one incident involved another Disney movie.

“There was one song in ‘High School Musical 2’ where they’re singing about the stereotypes of Hawaii (‘Humuhumunukanuka’apua’a’), and my parents hate that song. They think it’s super rude and disrespectful to Hawaiians because they feel like it’s making fun of them. A lot of people don’t think they’re properly represented, and it’s (because) of the stereotypes that are seen throughout these movies,” Adaniya said.

Dillon Tautunu Smith, Samoan-Tongan graduate assistant at the Asian Culture Center in Indiana University, said he applauds the “Moana” writers for making Maui a lead character. However, this praise is not without critique.

Smith said, “Maui is one of our legends across Polynesia and other Pacific Island groups, like Melanesia and Micronesia, and I’m definitely excited for people to get exposed to one of those powerful legends that we all share (as) Pacific Isla

nders. I think the reason why (the writers) chose Maui is because (he is) a pan-Polynesian shared value. But at the same time, it sort of homogenizes all of us as one culture which is still problematic; however, at this point, people in my experience don’t know anything about Pacific Islanders at all.”

Despite these criticisms, “Moana” has still been well received by supporters of Asian Pacific Islanders in entertainment. Along with Miranda, who is Puerto Rican, the movie recruited Samoan composer and musician Opetaia Foa’i.

Adaniya said, “The goal of creators should be doing research to figure out specific cultures you don’t think of automatically when you (have an area in mind). They should try to submerge themselves in that culture and get a better understanding of all the people in the area, and all the different cultures people partake in, rather than portraying one stereotype in a film.”