With college deadlines approaching, students reflect on the practice of affirmative action 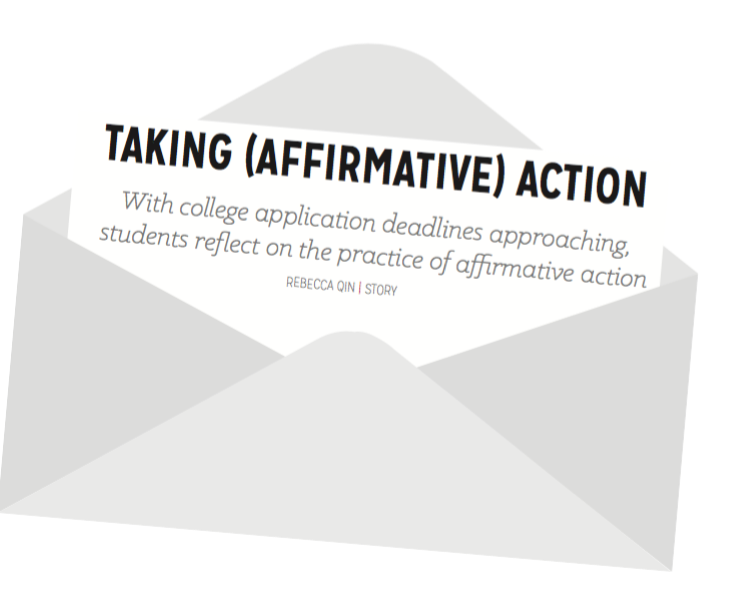 On Oct. 26, a group of conservative students held an “Affirmative Action Bake Sale” at the University of Texas, sparking outrage and protest. According to the Huffington Post, the group charged different prices for its baked goods based on race and ethnicity. Their intent, they said, was to mirror what they saw as preferential treatment in the application process. While the group was met with backlash, the controversy over affirmative action is hardly new.

The term “affirmative action” was first used in 1961 by John F. Kennedy in legislative geared to prohibit government contractors from discriminating based on “race, creed, color or national origin.” The practice was adopted by many colleges and universities, in an attempt to diversify their student bodies. In other words, an admissions board that practices affirmative action takes into account a student’s background, environment and other components, such as race and ethnicity. Those practices, however, have come under scrutiny, and just last month, the U.S. Supreme Court upheld a constitutional amendment in Michigan which bans affirmative action preferential treatment.

As seniors continue to submit their college applications in the fall, topics such affirmative action may become more familiar to them. According to senior Matt Simons, who identifies as Hispanic, affirmative action is a heavily discussed subject.

“Affirmative action tends to be a very serious topic,” Simons said. “Some people can become very worried that it somehow acts as a disqualifying factor for their applications.”

There are two sides to the debate. One side argues affirmative action should exist because those who are of a poorer, less educated neighborhood, which includes minorities, deserve to be raised to the same level as other applicants. The other side asserts that affirmative action shouldn’t exist because race shouldn’t matter in considering applicants, and all candidates should be treated equally. According to Melinda Stephan, College and Career Programming and Resources Coordinator, these differing sides both have strong beliefs.

“I think that the topic of affirmative action creates strong emotions on both sides of the issue because it aims to provide access and opportunity to underrepresented groups, which is a positive goal,” Stephan said via email. “However, in providing that access and opportunity, there is a belief that those who are not members of an underrepresented group are being overlooked, even if they are equally qualified. Unfortunately, I think that the issue creates an us vs. them mentality, and that’s what makes it so tough.”

Simons said he believes affirmative action is beneficial to the college admissions process.

“When you look at today, the populations that are facing the most, for lack of a better word, oppression, maybe the most obstacles or difficulties, they tend to be communities very heavily concentrated with minorities,” Simons said. “I think it’s very important offering this caliber of education opportunities to other minorities, in particular African Americans, Hispanics and other different demographic groups.”

“The primary potential harm (of affirmative action) I can identify is the potential for a mismatch between the student and the school in terms of academic and social preparedness for success in that environment,” Stephan said. “That being said, I feel confident that these schools work dilige 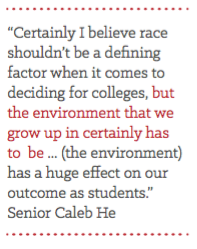 ntly to consider a variety of factors in addition to race in order to make certain that the student is qualified and prepared to succeed.”

Senior Caleb He, while he said he agrees with some aspects of affirmative, said he also believes race shouldn’t be as heavily weighted as other components.

“Certainly I believe race shouldn’t be a defining factor when it comes to deciding for colleges, but the environment we grow up in certainly has to be,” He said. “I mean, it’s undeniable that environment has a huge effect on our outcome as students and outcome as people. That just happens to be correlated with race a lot of times.”

Affirmative action can be controversial because many people believe it is counter-productive.

“One of the biggest problems is that when you bring, let’s say, someone from a worse-off environment into an environment like Harvard, they end up completely underperforming and where they used to do well, they now come in and do poorly,” He said. “They don’t end up feeling any better about themselves. It’s not about necessarily putting them into the very best place possible, because that may not be right for them. It’s certainly about putting them in the very best place for them, personally, and better for their own growth, and most cases that means a better institution than where they’re grown up for.”

However, according to He, though there are flaws to the system, affirmative action is necessary in increasing diversity in schools.

“Without affirmative action, we would be completely ignoring diversity,” 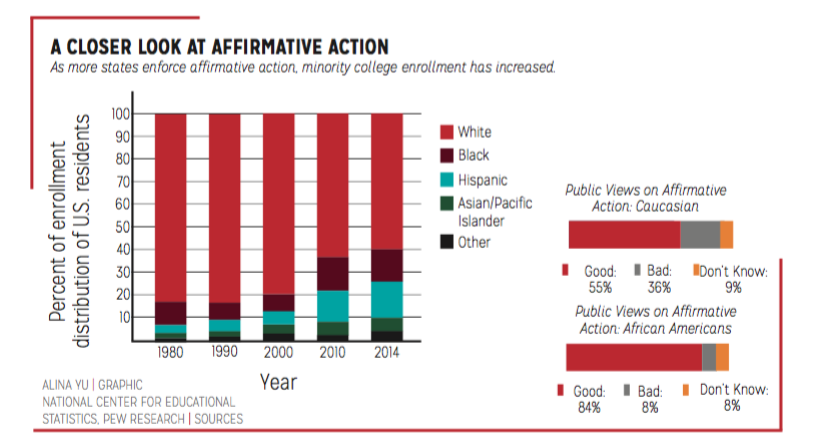 He said. “I’m not really aware of the culture, (however). I mean, you can have a bunch of people that are different in one place … does it actually foster celebrating their differences, does it actually foster we’re building together, even though we’re different? I don’t know, because I’ve never been to these cultures. From what I can tell, there’s still apparently a lot of isolation (in) these kind of places, so it’s not a perfect system, but in principle, I think it’s right.”

While Simons said he agrees, he also said there are other options as well, such as recruitment programs. Many colleges use recruitment programs, which can include offering free college visits or sending representatives to high schools, to try to reach out to especially underrepresented or diverse students.

“I participated in (a recruitment program) at the University of Pennsylvania,” Simons said. “I still think affirmative action is still really valuable, (but) I think programs like that can help teach different underrepresented students about some of the different academic opportunities at school.”

According to both He and Simons, affirmative action policies may or may not affect them personally.

“I think generally when (colleges) see the word “Latino,” they make certain assumptions,” Simons said. “It casts a different light onto what it is I achieved in school, in academics, in all these different areas of my life. I guess it offers more of qualification for my experiences and maybe a better idea of some of the challenges I might face. I’m not totally sure what they will think.”

He also expressed uncertainty on how affirmative action may affect himself. 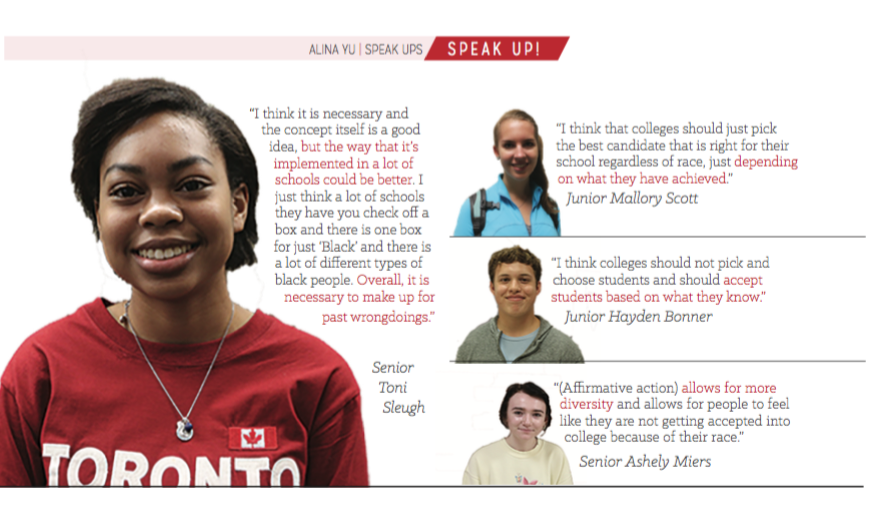 “In considering my own choices for college, I know that the schools I’m applying to, a lot of them use affirmative action,” He said. “According to a lot of stuff I read … Asian Americans tend to get selected against when it comes to affirmative action because of statistically higher test scores and all of that, but I don’t mind that as much. If society is arguing for the right principle, then I guess it’s fine.”

According to Simons, ultimately, decisions of the college shouldn’t be taken personally.

“I think some groups feel as though the reason they were not accepted is affirmative action…that’s just not true, I think it’s just this justification for the fact that they just weren’t good enough, or they didn’t appeal to the college,” Simons said. “These are groups that might have base challenges when we think about how they might thrive at some place like Harvard. They aren’t really well-represented within their applications because they’ve only had so many opportunities compared to someone else. I think people get really sensitive thinking they’re rejected because of that.”

“Far too often a student who is denied admission to a college believes that they’ve done something wrong,” Stephan said. “That’s typically not the case. In fact, as I mentioned earlier, schools are looking for reasons to admit students. Their goal is to build a diverse freshman class each year, and that diversity is not just related to race but to geography, majors, athletics and special talents, extracurricular contributions, etc.

“In the end, decisions must be made based on a wide range of factors,” Stephan continued, “and all students can do is put their best application forward and hope that they stand out as someone who will fit into that school’s vision of their next class.”