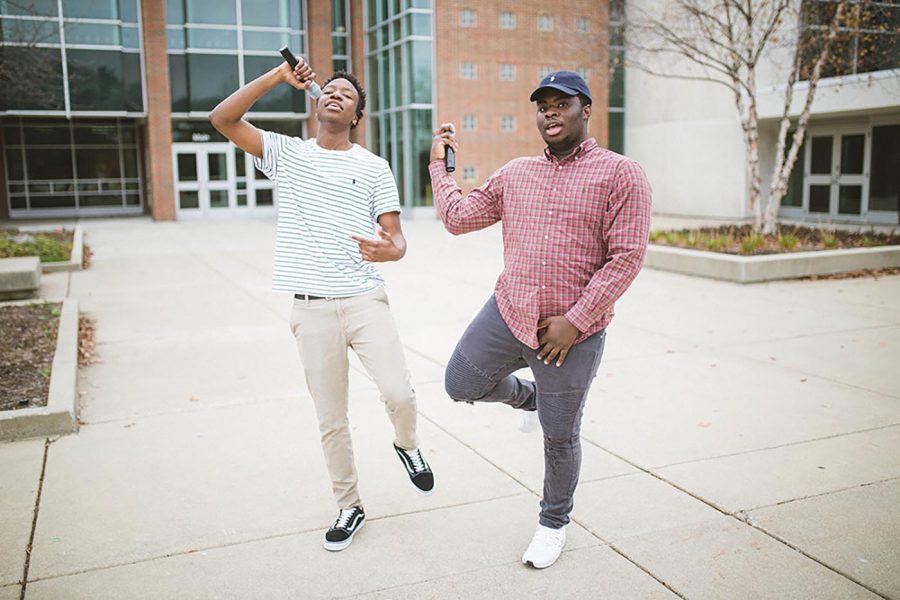 RISING RAPPERS: Rappers and juniors David Chilemba (left) and Rashid "RJ" Conteh pose with microphones. Chilemba said they will most likely pursue rap as a career.

When rappers and juniors David Chilemba and Rashid “RJ” Conteh come home from school, their main focus isn’t studying, socializing with friends or going to sports practice. For Chilemba and Conteh, their first order of business is writing music for their mixtape, which they plan to release Dec. 23.

“It’s almost like writing a paper. That’s how we approach every song. We usually think of a topic, we usually butt heads for like five minutes. Then, we get quiet and it just happens,” Conteh said.

To Chilemba and Conteh, perhaps better known by their rapper names, “Skrt Chilemba” and “Yung Godiva,” rap is much more than simply a genre of music. To them, rapping is a way to express themselves through music and is also something they hope to develop into a career in the future. 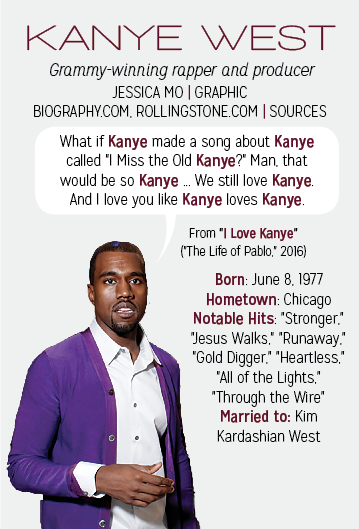 Although the idea of students treating rap as not only a valid form of music but also a potential career option may seem like a rarity, there has been a significant growth of students who are beginning to recognize the legitimacy of rap as a genre of music and realize its commercial potential.

Take for example junior Anoop Magesh. While Magesh is not a rapper himself, he creates computer-generated beats, which he sells to rappers to use in their songs. By doing this, he is able to seriously pursue his interest in rap and hip-hop while simultaneously earning a profit.

“I make beats on the computer. I program it. I spend a lot of time, like an hour a day at least, so I make the beats. Then I sell them. I put them online, people buy them, and it’s like a profitable thing because I don’t have to pay anything to make it,” Magesh said.

By making these beats, Magesh not only earns money, but also has the opportunity to express himself through his music.

Magesh said, “(I like) how you can be creative. If I’m pissed or something, I can make an angry, sad beat, or if I’m happy or hyped up, I can make a hype beat, so it’s pretty hype.”

Rap’s accessibility is a large part of its appeal: anyone can create a song with music editing software. Rappers don’t need to be able to play instruments or have vocal training.

“You don’t have to have training. I just found the software, and I just started messing around, and I got hooked onto it,” Magesh said.

Rappers only require an idea and the initiative to see their song through. Because of the minimal preparation needed, many students have begun to immerse themselves in this form of art.

“(I enjoy) the fact that you have nothing at first, and then you can make this amazing creation in less than a day,” Chilemba said. “It’s kind of sick.”

Although most rappers at CHS start out simply looking for fun, as Chilemba and Conteh became more practiced, they truly began to develop their own sense of style and differentiate themselves from other musicians. Chilemba said he and Conteh began rapping by singing along to Kanye West in middle school. Despite their interest in rapping together and creating their own music at the time, Chilemba said neither of them were interested in the time commitment or dedication rapping requires. Now, as juniors, they are devoting the majority of their free time to improve their music by taking their individual style to the next level and fine-tuning their sound.

“Personally, I’m more like lyrical wordplay and like harmonizing melodies and stuff. (Conteh) is more just like solid flow, and he knows how to make the beat complete,” Chilemba said. “I can lowkey kind of sing, so I can sing rap lyrics in a different format, so it’s pretty unique.”

Throughout the process of developing their own style, Chilemba and Conteh also have begun to incorporate aspects from successful rappers such as Kanye West into their own music.

“Sonically, for Kanye, just like the way you hear it and everything, he really takes time with it, he spends days on one song,” Conteh said.

Chilemba and Conteh both said rappers Young Thug and Travis Scott were other major sources of their inspiration.

“Young Thug really knows how to use his vocals as not like just singing or rapping, but makes it part of the song,” Chilemba said.

“And for Travis Scott, it’s like both of them combined,” Conteh said.

In addition to rap becoming more accessible to students previously interested in the genre with the increasing convenience of purchasing and using music editing software, many students who have previously been disinterested in hip-hop have also recently begun listening to and enjoying rap. A large part of this is due to the immense success of “Hamilton,” a musical wh

ich tells the story of founding father Alexander Hamilton through hip-hop and rap. By implementing aspects of

hip-hop and rap into the score, “Hamilton” brought rap to audiences who previously lacked appreciation for rap and hip-hop as a genre.

Jacob “Jake” Greene, “Hamilton” enthusiast and senior said, “I really was not a big fan (of rap). I hate myself for it now, but I would tell people that rap didn’t count as music, it was just speaking to a rhythm because I was very self-centered, and I thought, ‘Well if they’re not singing, it’s not real music.’ I don’t believe that anymore, but that’s definitely how I felt before listening to ‘Hamilton.’”

Partly because of “Hamilton’s” popularity, rap has come to be recognized as a serious form of music . Students have also begun to genuinely understand and appreciate the hidden complexity of rap and the labor required in creating the unique sound that shapes the genre as a whole.

Greene said, “It really showed me that rap wasn’t everything that I thought it was. There’s so much more to rap. There’s so many intricacies when it comes to rhyme scheme and rhythm and things like that that I had never thought about or considered, and ‘Hamilton’ really showed that to me.”

As more young people have become interested in rap because of “Hamilton,” the musical has also piqued an interest in rap for older generations as well. Because of the manner in which hip-hop is woven into the story of the musical, many older people previously averse to rap have also grown to enjoy the music.

Applied music teacher John Burlace said, “(Without rap), I don’t think “Hamilton” would have been received (as well). I think that’s part of its allure. And that’s even part of its allure for people who don’t like rap or generations older than mine. It’s almost like a guilty pleasure type of thing … It’s hard for it to not really resonate, especially with what’s going on in the world right now, but even people who are older and didn’t grow up with rap now get to like it, and it’s okay because it’s a musical.”

Another reason for the increase in rap’s popularity is because of the way it borrows aspects of other genres of music, which creates a greater appeal to fans of other musical genres. Chilemba and Conteh said they were open to all types of music and listen to a vast variety of artists such as Dean Martin, Bob Marley, Taylor Swift, Blake Shelton and even Ludwig van Beethoven before writing their songs.

While rap is known for incorporating elements from a multitude of musical genres, it also utilizes sounds considered to be unusual in most other forms of music. This is especially true in the beats of raps and the unexpectedness of these noises creates a sound that is more interesting and engaging to the listener.

Magesh said, “I guess my beats are unique to me, but it’s just a whole lot of different sounds and stuff. I try to bring in weird sounds that you wouldn’t hear in other songs, like sounds that make you think, like different provocative sounds.”

There is a plethora of reasons for the rise of rap at CHS. Whether it’s the accessibility or the storytelling capacity as demonstrated in “Hamilton,” rap has grown to become a genre of music enjoyed and appreciated by the masses.

“It’s written in a way that’s designed to be catchy,” Burlace said. “It’s hard to not love it.”