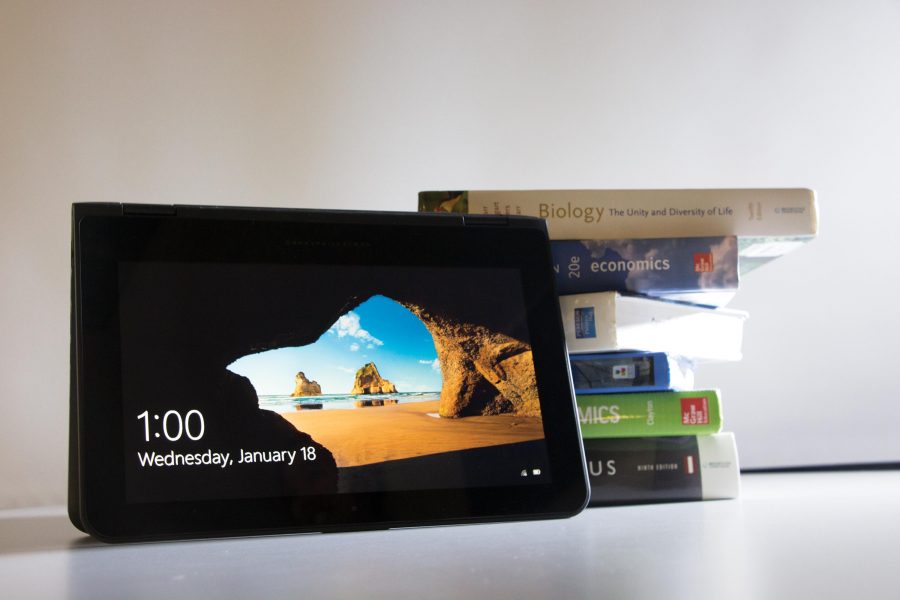 The next step for advanced technology integration is in education.  Of course, schools like CHS have had devices like deskt

ops and laptops for many years now, but now there is a move towards more personalized software and hardware for students and teachers alike.

“I think part of it is to prepare students for the college environment, where they will most likely be using an LMS (Learning Management System), whether it be Canvas or Blackboard. It will give students the ability to collaborate more easily and will allow teachers to use a more blended learning style,” Ryan Ringenberg, CHS technology coordinator and world history teacher, said.

According to Ringenberg, CHS just started this transition with last semester’s implementation of Chromebooks, iPads and convertible laptops to teachers around the school, so there has yet to be any substantial evidence of how much it has affected learning for students at CHS, if any.

The Carmel school system is not the only district in the county to implement technology integration in the classroom: Noblesville Schools has already enacted a full one-to-one policy where every student from the end of elementary school through senior year of high school receives an iPad.

“Students must increasingly collaborate with others, communicate effectively, think critically and be creative in solving problems or completing tasks,” Swickheimer said via email. “They must be adept at learning new technology, evaluating the utility of digital tools and effectively applying available technology resources.”

According to Swickheimer, Noblesville Schools have already seen physical proof of improvement in their learning from their technology implementation.

In regards to CHS, Ringenberg said he thinks the change hopefully will replicate trends seen in other districts.

While some may argue that this transition is just being reactionary of other schools around CHS, Ringenberg said he disagrees. 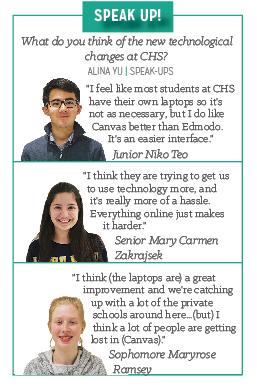 “I think the district is trying really hard to think independently about (the move toward more technology integration),” Ringenberg said. “Now, they are certainly using data from other school districts to help them with their decision. I think they see a lot of benefit in increasing technology use, but they want to do it right. Our district has been holding back a little bit just to gather data to learn from mistakes of other districts, and we may have been slower to the game because we don’t want to replicate.”

“I am a little excited and nervous for this new step for schools. While I think that technology has the potential to make things much easier for some, the transition period is going to be really rough and hard on both the students and the teachers,” Garcia said. “It is also a possibility that, for students like me who prefer traditional learning tactics, we will be left behind in the transition.” 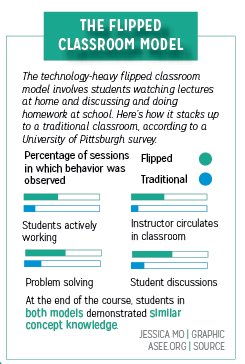 According to Garcia, the idea that schools are moving away from his preferred method of learning is nerve-wracking. However, Ringenberg said the school is not quite ready to jump entirely into LMS technology integration.

Also, despite the apparent success that Noblesville Schools has had with integrating full one-to-one policy, Ringenberg said CHS has a different policy.

“Our district has put a lot of thought and research into this and has determined that there is not one single method or device that works for every department. ‘One-to-World’ is our district’s motto. Having multiple options for students and teachers is viewed now as the best approach,” Ringenberg said.

It is always important to weigh the advantages and disadvantages of taking this large of a step for a school like CHS. According to Ringenberg, technology allows for students and teachers to have greater collaboration, organization and access to information.

“I believe that there will be a learning curve for both students and teachers, but eventually as technology is used more in the classroom, students will begin to see the organization and collaborative benefits of technology,” he said. “Better access to information, instant feedback and less paperwork that could be lost are just some of the ways technology might improve learning.”

Garcia said he predicts both positive and negative aspects of the new integration.

“Communication is definitely a plus. (But) it has potential to be a very big distraction for the students. It’s also hard for people like me to make that jump since it is a big chance,” he said. “If you have an iPad, you are able to access online resources, but, at the same time, students now are able to have limitless ways to get distracted at their fingertips. I hate having my phone in class all the time. You will be surprised how easy it is to get distracted with everything like Snapchats and text messages and games since they are all just right there.”

Contrary to the emphasis schools like CHS and Noblesville have placed on it, at the 2016 Arizona State University Global Silicon Valley Summit in Salt Lake City, a convention for investors and businesses involved in education and technology, Bill Gates, Microsoft founder and technology expert, said the implementation of technology in schools has actually done absolutely nothing for student outcomes.

Ringenberg said he agrees with this sentiment and hopes CHS will do it differently. He said this is entirely true if the technology at work in schools isn’t tailor-fit for the students and the teachers.

“If done improperly, with haste and with no clear direction, Gates is exactly right. Quality of tech integration is more important than quantity. Moderation, proper balance with traditional methods and proper training of tech integration are very important for it to have any positive impact,” he said. “A blended learning model is what our district is recommending.”

Garcia said he agreed with Gates, and said he believes schools should focus on true learning, with technology as a possible tool.

“Technology really has nothing to do with teaching the actual students. Technology should be used as a resource to make things easier, like accessibility and communication, so it does not surprise me that it isn’t actually doing anything significant and positive to the actual learning,” Garcia said. “Education, to me, is based around the teacher: what lessons they do and focus on, their methods of teaching.”

At CHS, the key to success in developing a technology basis for students and learning seems to be in taking small steps instead of huge leaps. For example, this year, students have seen the introduction of Canvas, a new, universal LMS for students and teachers to communicate beyond the classroom and use new tools for organization and assessment.

The transition to Canvas, however, has been mixed. On one hand, Ringenberg said he considers it a success for the school.

“I believe that the transition to Canvas has gone smoothly from my perspective. There have been multiple trainings and avenues that teachers can gain help,” Ringenberg said. “Because our district is taking a slow-and-steady approach and has not rushed change as some districts have, I believe the transition will continue to go smoothly.” 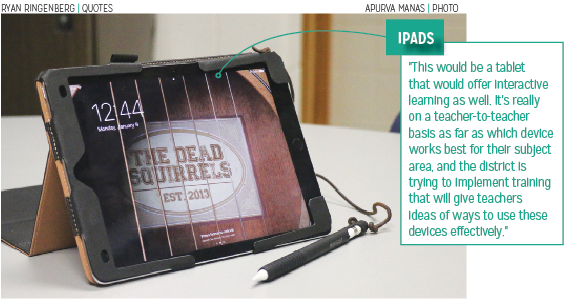 But for some students, like Garcia, the transition has been the opposite, and he said not everyone seemed to be on the same page.

“I feel like the transition period to Canvas has been pretty bad for the students,” Garcia said. “When I showed up to school for my senior year, there was no warning or much communication for what it actually does and how it works. I didn’t know how to use it or what the point of it really was. Now that I have a grasp on it after a few months of using it, I guess it’s all right. It functions pretty decently. I mean, it’s just basically having all teachers websites in one place, so it is a small step. The transition period was rough, though.”

Even though some, like Garcia, said technology integration has been bumpy so far, it looks like there is no stopping the trend of increased technology in schools, including at CHS. 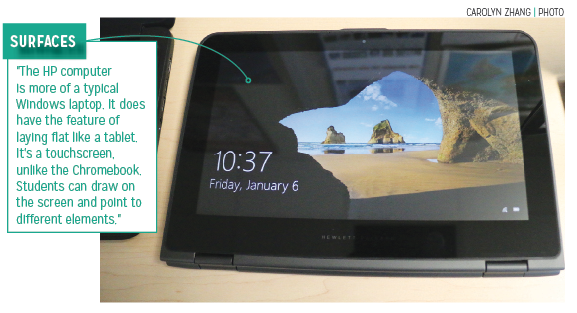 not be done with traditional methods, such as a flipped classroom model,” Ringenberg said.

According to Educause, a nonprofit organization based around education tactics, the flipped classroom model is the idea of completely reversing traditional learning techniques. Homework would consist of learning the lessons and material in video format while class time would be spent entirely on discussion, projects and interaction.

Garcia said he thinks the success of technology in school, no matter what kind of implementation or model, relies almost entirely on the transition phase for him.

Garcia said, “At the end of the day, it really all depends on how the school goes about (implementing technology). Going from traditional educational ways of teaching to doing everything with technology is a big jump. The most important thing in transitioning to technology in our school should be finding a balance between not creating an environment of distraction and improving communication and accessibility.”

Ringenberg said the district is still working on enacting policies  and determining best practices for its new educational technology.

“Really, this year is in a sense kind of a pilot year,” he said. “Problems such as getting distracted would be some issues that, hopefully even during this semester, there would be some solutions worked out with that if that is becoming a problem. Or at least, if anything, best practices if how to utilize it in a way that students wouldn’t be as distracted. Maybe it’s just one per group, and instead of one for every student. That’s something that’s in the works.”