Will Our Education System Be a Good Apple or a Bad One?: What could Betsy DeVos’s leadership mean for a school district like Carmel’s? 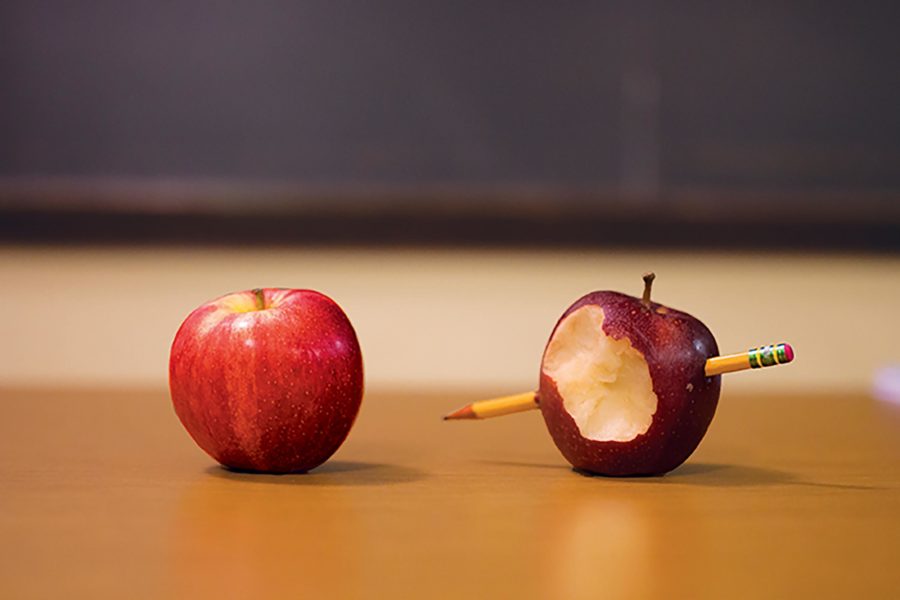 On Feb. 7, the Senate confirmed Betsy DeVos as the U.S. Secretary of Education. DeVos, a wealthy Republican donor and former Michigan Republican Party chairwoman, has sparked controversy among educators and politicians alike.

“I think she’s a terrible choice,” Odya said. “The more I read about her, the more angry I got, and it had nothin 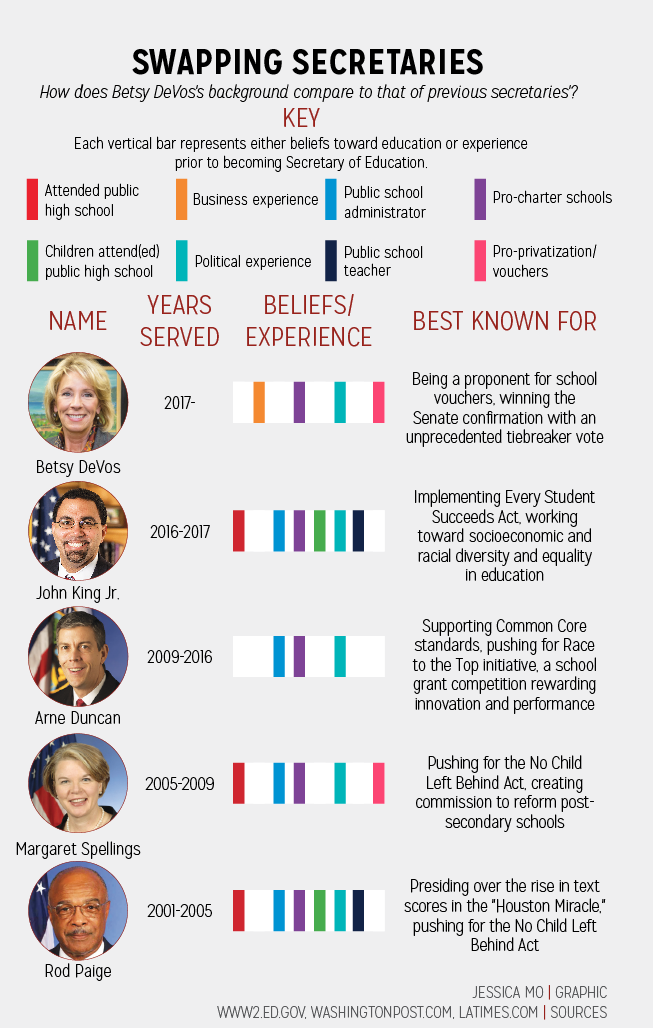 g to do with the politics. It was just the fact that she’s nowhere close to being qualified to holding this position.”

Hailey Patane, daughter of Carmel Clay Schools employees Dan and Cathy Patane and sophomore, said she is concerned about the effect DeVos will have on her parents and students in general.

“Just the situation as a whole, (my parents) definitely do worry about (it) because by appointing her, (Trump) definitely puts all of the power for education in her hands. The fact that she doesn’t have any background and her kids went through private school, she went through private school, she just doesn’t have any experience with just plain old education as a whole,” Patane said.

Despite concerns voiced by parents, teachers and students, school board president Layla Spanenberg said DeVos’s new role will not have a dramatic impact on Carmel Clay Schools (CCS).

Spanenberg said, “(The school board) will continue to make our decisions for our school district with students as the center of our focus. (DeVos) taking office doesn’t impact us at this point; there aren’t any new federal laws that we have to comply with that might be different from what we’re already doing.”

Although DeVos’s policy doesn’t directly affect CCS, it is important to understand how she might impact public school in the United States overall.

DeVos’s policy focuses heavily on school choice, or private school vouchers. According to the National Conference of State Legislatures, school choice is a concept which allows students to apply their allotted taxpayer money as vouchers toward any school: public, private, charter or otherwise, instead of federal funding feeding directly into public schools. For example, a student enrolled in public school may decide to redirect their allotted funds to a private school or charter school, as long as the student is eligible and their desired school is involved in a school choice program.

School choice promotes a free-market philosophy in which educational competition weeds out poorly-performing schools. Opponents of school choice argue public schools will lose funding overall, and federal funding going toward religious schools may jeopardize the separation between church and state. However, there is little research to back up either side and the topic is still widely debated.

According to the Indiana Department of Education (IDOE), Indiana’s school choice program is one of the largest in the nation. An IDOE study released last month showed as of the 2016-2017 school year, 34,299 students participated in Indiana’s Choice Scholarship Program.

Despite its prevalence in Indiana, Spanenberg said the school board is alarmed by DeVos’s endorsement of school choice and private school vouchers.

“When we take money for the vouchers, it all comes from one pot, so when money is funneled away to the private schools, that leaves far less for the public schools,” Spanenberg said. 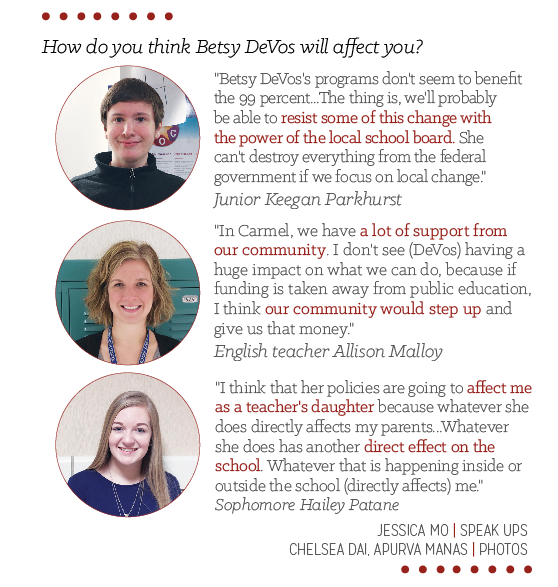 Odya said she agrees DeVos’s school choice policy may negatively affect funding at CHS, a school that already has large class sizes and teachers without classrooms.

“It could definitely cause a lot of trouble with funding in a district that already has trouble with funding,” Odya said. “I feel like this school, because of our teachers and our students and our families, that we’ve been able to sort of counteract what happens when you lose funding, just because we lo

ve it here. We take care of it, we take care of Carmel, we take care of each other, because we’ve been able to throughout the (funding) squeezes that have come the past decade. If it keeps squeezing, if we keep losing more money because now it’s going to be sent to private schools, we may not be able to counteract it anymore.”

DeVos’s strategy is to run U.S. education like a business: by giving each student the option of applying funding to a school of their choice, schools will be motivated to improve as they compete for students.

“She is a proponent of school vouchers, which I think is a great thing because it gives people the option to go to school (where they want),” Szydlowski said. “You could take (your funding) to any school you want. My grandpa’s friend, they live in a pretty crappy area; his friend, he has a kid, and he was like, ‘We can’t afford to go to the only school in the area, which is this private Catholic school, but all the welfare kids can.’ If the funding worked (with vouchers), then he would be able to go. Instead, they have to go to public school.”

Though private school vouchers are commonly used in Indiana, Spanenberg said CHS does not participate in a voucher program. She said any new policy relating to school choice would not directly affect the number of CHS students, but would affect school funding.

The IDOE’s study compared the cost of school vouchers—$146 million for this school year—to the hypothetical cost of all school choice students attending public school—$214 million.While this confirms overall state savings, they also show the loss of funding experienced by public schools as a result of the school choice program.

Spanenberg said DeVos’s extreme focus on school choice prompted the school board to draft a letter for Indiana state legislators before DeVos’s confirmation, urging them not to vote for DeVos.

The letter read: “We are not against parents having a ‘choice’ in education, and we believe all students, regardless of their zip code, should be able to attend a school that will allow them to reach their potential. However, we are deeply concerned about public funds financing for-profit or religiously based schools.”

DeVos, though decisively in support of school choice and private school vouchers, has demonstrated a lack of knowledge about other important educational issues. When questioned during her confirmation hearing on her stance regarding the importance of growth versus proficiency, a commonly debated educational issue, DeVos did not understand the difference between the two and had to ask for clarification.

Odya said, “The growth versus proficiency is just her showing her complete lack of knowledge of anything education. When we were first talking about it, right before her hearings, I asked my students. All my students know the difference between growth and proficiency.”

Though Szydlowski supports DeVos, she said some of her unclear stances on educational issues are concerning.

“If I were going to say that I have any problem with her, it’s that she doesn’t seem to be well-versed in a lot of issues with the actual running of public schools because she seems so into letting people go to private schools,” Szydlowski said.

According to ABC News, during her time as a Michigan Republican Party chairwoman, DeVos campaigned for educational rights, especially emphasizing school choice. Though she has a political history tied with education, many people, like Spanenberg and Odya, believe the Secretary of Education should have a background in public education.

Spanenberg said personal ties to the Carmel Clay School system allow her to understand and do her job better on the school board.

“When Alexander, my oldest, started at Smoky Row, I wanted to better understand who developed the curriculum, who made the rules, what policies, what guidelines, I wanted to better understand how the school system functioned,” Spanenberg said. “I felt like I had to take a bigger role in my school district and make sure I could advocate for all students … I was very much interested in advocating for everyone. 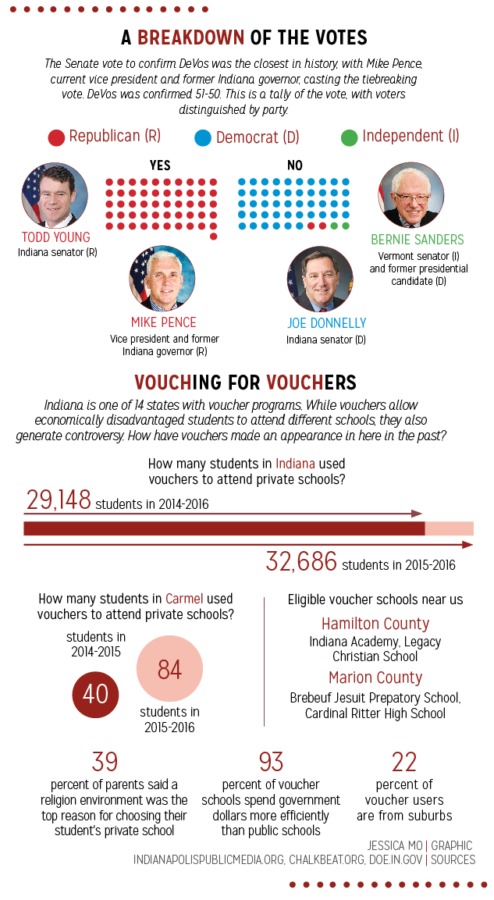 Spanenberg said DeVos’s lack of educational perspective from may be detrimental to her performance as the Secretary of Education.

“I can appreciate that she’s trying to
run education like a business, but students aren’t a business. Students are individuals, and if we are not looking at the role of leadership directed at the success of each and every student, I think we’re missing the boat,” Spa
nenberg said.

“(DeVos) has never been a teacher (or a) principal. Had (Trump) chosen someone who actually does have experience in some way, even if it’s just going to public school, that totally could have helped because they would know the environment, and they would know just how regular schools work. But by appointing her, it’s just not going to be easy because she doesn’t have the background experience that we need,” Patane said.

Now that DeVos has been confirmed as the Education Secretary, Spanenberg said the school board is focusing on the future.

“(DeVos’s school choice plan) does affect programs. That is the primary reason we have to ask our community for the referendum,” Spanenberg said. “The school board, at our February workshop, passed a resolution to have another referendum vote, a special election on May 2 to continue funding to maintain what we’re doing now.”

Spanenberg said the tax referendum will allow the school district to maintain funding whether or not DeVos’s school choice plan is put into action.

Whatever happens as a result of DeVos’s new position, Odya said CHS will maintain its legacy of excellence in the future.

Spanenberg said CCS will likely not be affected by DeVos’s policy, at least in the short term.

Spanenberg said, “I can’t speak for tomorrow, but as we sit today, we are the same as we were yesterday. We are still implementing our guiding principles, our same policy, our same curriculum. Unless there’s some federal statute that changes, or state statute, we will continue to do business as we have been doing business, and our business is to educate students.”