A Run on Recovery Road 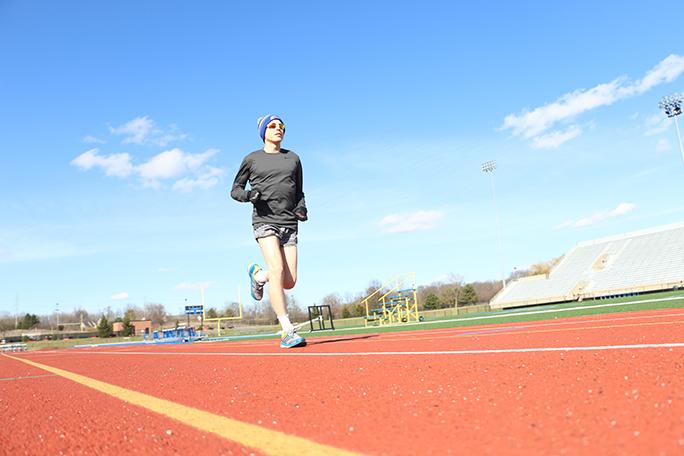 “I’m definitely mentally stronger, but I think everyone gets mentally stronger. I mean you have to be mentally strong when you go through chemotherapy, but also I look at life in a whole different perspective now, especially because I wasn’t given that great of a chance to live, and you just get a sense of what’s really important, like family and what’s maybe not that important.” - Matt Cooper

For most CHS students, Feb. 16, 2016 was just another normal day, but for Matt Cooper, student athlete and senior, it was a day that would change the rest of his life. On that day, Cooper was diagnosed with a rare form of leukemia. The diagnosis presented Cooper with a low chance of survival, and it meant that for the next year he would have to give up many aspects of his life in order to get healthy, including running.

Cooper said, “It was definitely shocking. It doesn’t really hit you until you’re in the hospital just laying there.”

Cooper’s treatment included chemotherapy, a bone marrow transplant and months in the hospital. But even as Cooper began to undergo treatment and spent most of his days in his hospital room, he did what he could to stay active. 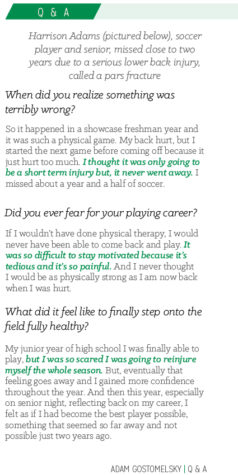 “As an athlete, if you’re a cancer patient, you have to stay in your room so you can’t really do anything too active. But I was lucky enough to have enough room in my little hospital room to have a stationary bike placed in there, so that’s how I stayed active during it,” Cooper said.

Cooper is not alone in his efforts to continue exercising even while he was sick. Anastasia “Tasha” Geisler, student athlete and junior, was diagnosed with an accessory navicular bone last year. After undergoing surgery, Geisler had to take more than six months off from running, but even as she watched from the sidelines, she did what she could to stay active.

Geisler said, “If you ever went to a cross country practice, you’d see me hopping around on one foot, doing anything I could to stay active and get out all of my energy.”

For both Cooper and Geisler, the road to recovery was not short or easy, but both continued to fight and were able to slowly become healthy again. For Cooper, after months of treatment, he finally beat all of the odds and entered remission. Although Cooper continues to deal with some of the lasting effects of his cancer, he is now back on his feet and running again. According to Cooper, beginning to run again was not a simple process and was at times both mentally and physically draining. 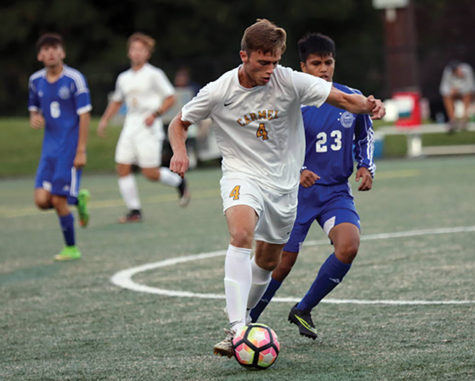 Cooper said, “(Running) kind of sucked at first. When I first got out of the hospital, I couldn’t even run a mile, but it’s kind of just been a slow progression getting my strength back, because during the bone marrow transplant you can’t even get out of bed because you feel like crap. So it’s just a matter of being patient.”

According to athletic trainer Brittani Moore, student athletes who are coming back from major medical problems often find that the mental aspects of recovery are the most challenging.

Moore said, “At first, typically (athletes) are a little more scared, especially with the bigger injuries, they’re a little more scared and timid, so it’s really more of a mental game to let them know they’re fine, which is why a lot of the drills we do during the therapy process is sports related specifically to their sport so that they have confidence that they’ll be able to do it.”

Additionally, in 2015, a study from the National Collegiate Athletic Association’s Sports Science Institute reported that the mental effects of illness and injury on students can be extensive, ranging from annoyance and frustration to anger and depression depending on the severity of the problem.

Cooper said, “The hardest part is probably the mental (side), because my long run used to be 10 miles, and all of a sudden you’re diagnosed with cancer, and all of a sudden you lay in bed all day and, you don’t even have the strength to get out of bed. It takes such a mental toll on you because you start thinking down on yourself almost, so definitely the mental aspect is the hardest part.”

While both the Sports Science Institute and Moore’s experiences show that athletes must overcome significant mental barriers on their road to being healthy, studies also found that many athletes may come back from injuries stronger than before if they have a good support system and proper treatment. According to Cooper, the support from his friends, family and especially his teammates has been an important part of his recovery process.

“It’s everything (having their support) because if I didn’t have the cross country and track teams, and if I didn’t have teams that I knew I was running for and that were including me in practices, even though I’m not officially on the team yet, that does a lot and that means a lot,” Cooper said. “Without the cross country and track teams’ support, I really don’t know where I’d be or what I’d be doing right now.”

Furthermore, according to the aforementioned 2015 study, athletes who are returning from a major injury may not only have a heightened body awareness and better pain management skills, but it is likely that they will also come back with a new perspective on their sport and more emotional strength.

This held true for Geisler as she said, “I think (my injury) helped me become a better runner because it made me really love what I’m doing. It helped me know my limits, but also showed me how tough I am.”

Similar to Geisler, Cooper found that through his recovery process, not only did he discover more emotional strength, but he also found a new outlook on life. 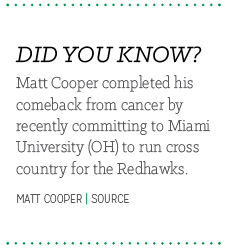 Cooper said, “I’m definitely mentally stronger, but I think everyone gets mentally stronger. I mean you have to be mentally strong when you go through chemotherapy, but also I look at life in a whole different perspective now, especially because I wasn’t given that great of a chance to live, and you just get a sense of what’s really important, like family and what’s maybe not that important.”