On Wednesday, the television version of Margaret Atwood’s, “The Handmaid’s Tale” will premiere on Hulu. The story follows the life of a handmaid named Offred as she journeys through a dystopian society which restricts women’s role solely to childbearing.

At this school, The Handmaid’s Tale is a choice novel to read in AP English Literature and Composition. Given the political climate and societal discussions currently taking place, some students said they feel this year was an especially relevant time to discuss the controversial topics within the novel.

“The book is centered around a lack of control for women,” Amanda Richmond, AP English Literature and Composition teacher, said. “Women are literally seen as valuable only for their wombs and their ability to procreate. (In the book) you’re dealing with a lot of feminism and a lot of loss of control and what it means to be an individual.”

Those themes struck a chord with many people around the country. For example, just last week in Texas, when women dressed as handmaids, in long red cloaks and white bonnets, protested anti-abortion bills at the Capitol. 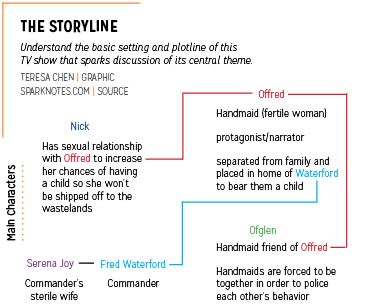 According to Richmond, the recent political climate was also present within the classrooms here.

“(Women’s rights) are what we are constantly dealing with. If we look at the Women’s March, it’s the same thing: equal opportunity and control of one’s body and one’s self. I think the heightened awareness of what’s been said about women and their bodies has made it (an) interesting conversation in the classroom,” Richmond said. 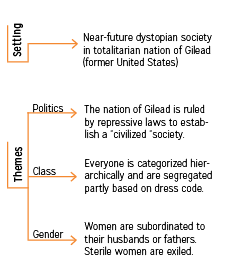 Caleigh Ramey, AP English Literature and Composition student and junior, said she agrees with Richmond and believes the election had an impact on the conversations her small group had.

“The political side definitely made the book deeper, especially since we were reading this at the time of the inauguration. We had to talk about these issues because they were so prevalent within the book,” Ramey said.

According to both Richmond and Ramey, the inhumane treatment of women in the book was uncomfortable yet compelling.

Ramey said, “As a woman, I obviously want to fight for women’s rights, so reading the novel was definitely disturbing for me, and I wanted to fix the problems of the book.”