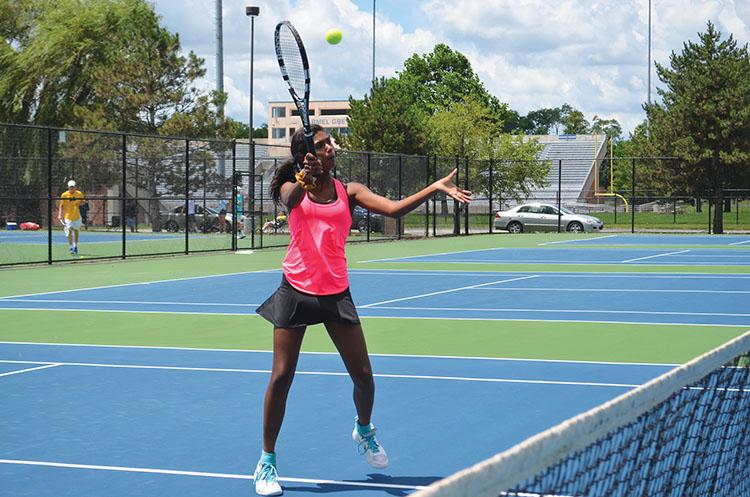 For most incoming freshmen, the first day of school marked the daunting transition from middle school to high school. With it comes the introduction of a new building, new friends and new teammates. Looking around, many see familiar faces from their middle school or sports team.

However, for sophomore Lily McAndrews this was not the case. Unlike many of her classmates, her transition was much different. She transferred from a class size of eight students to a school of more than 5,000. For McAndrews, her first day at CHS marked her first day at a public school.

McAndrews attended school at Highlands Latin School, in which students attend three- or four-day school weeks and were then assigned secondary assignments to work on at home. Compared to CHS, class sizes were significantly smaller. McAndrews had an average size class of only eight students in her entire grade.

“Obviously, I was intimidated about going to such a big school, but at the same time I have been playing soccer since about third grade,” McAndrews said. “I would play with a lot of kids on my team who would be in my grade, so I knew some faces going into school.”

McAndrews is not the only CHS student who has experienced the impact of athletics on the middle school to high school transition. For  freshman Anjali Natarajan, participating on the women’s tennis team this spring has made her feel less intimidated

by the transition from her middle school to CHS.

“I have gone to Sycamore School my entire life, so the transition was definitely going to be scary for me.  It was nice to have my brother go through it before me,” Natarajan said.

Natarajan attended Sycamore School for middle school. Her entire school had around 400 kids and her grade had 35 students, which is the same number of students in some CHS classes.

According to U.S. News, teens who play on sports teams tend to excel socially and academically because engagement in extracurricular activities helps alleviate anxiety over other aspects of the transition. Similarly, McAndrews said that the athletic opportunities offered at CHS, specifically the emphasis of a strong team dynamic, was instrumental to her experience as an incoming freshman.

“I think there’s no doubt that connecting with something fairly early as a freshman makes not only their transition better, but actually their overall experience of freshman year because they’ll be involved in something not all kids are in,” Wolf said.

For McAndrews, running on the varsity cross-country and track teams helped her make friends at CHS before the school year even began, making the transition significantly less daunting.

“Cross-country has summer practices, so I went there and got to meet a lot of people. Then when I came in on the first day it’s not like I didn’t know anyone because I did have a lot of friendships, so that definitely helped starting out in my transition. I was not as worried anymore,” McAndrews said.

According to Wolf, particularly fall sports present an advantage to students making the transition to CHS because they become involved and connect to CHS early on in the school year.

However, women’s tennis is a spring sport, so for Natarajan the season and team bui

lding will not begin until after the school year begins. Still, training at the Carmel Racquet Club helped Natarajan recognize some familiar faces.

According to Natarajan and McAndrews, participating in CHS athletics strengthened their overall school spirit due to CHS’s emphasis on the importance of a strong team dynamic

“Being on a team made me more proud to go and represent Carmel in general. I felt like I always had to represent my school, which I did not feel until this year. So, being on a team helped me feel proud of my school,” McAndrews said.

For Natarajan, a main reason she decided to attend CHS was for its athletic department. During her eighth grade year, she debated between attending Brebeuf Jesuit Preparatory School or CHS. After watching her older brother play tennis for four years and win a State Championship, Natarajan said she knew she wanted to participate on a CHS team.

“I wanted to go to a high school that would give me a really good chance at winning State and Carmel is so good at tennis. Sport and academics were my two big reasons,” Natarajan said.

“If you do not involve an involvement niche or connect with kids, it’s possible you’ll just be a student like anybody else–and get a great education– but you’ll miss out on a lot of great opportunities. Any freshman, whether they’re coming from Clay, Creekside, Caramel or a private school, if they can develop a niche and connect with CHS students, will get them involved and likely better transition,” Wolf said.