One hundred and counting: With this school’s wide array of over 100 clubs, new groups continue to form 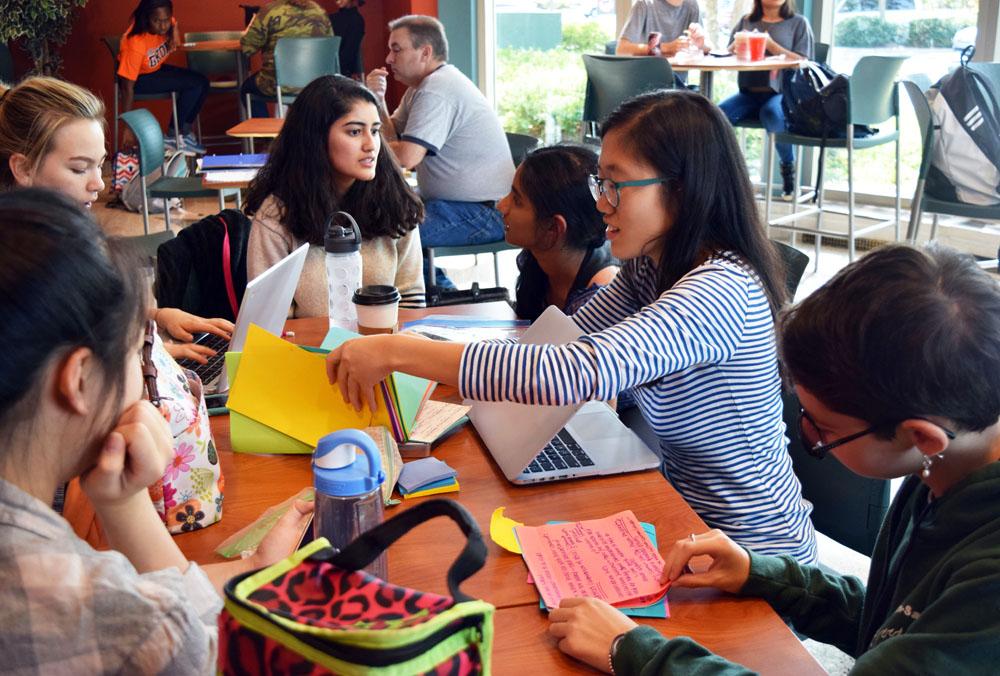 Members of the group Let's Talk continue their discussion on how to create a better environment at CHS for open discussion. Selin Oh, founder of the group Let’s Talk and junior, said she believes it is important to increase the conversation.

Over the summer, in the cafe at the Carmel Clay Public Library (CCPL), Selin Oh, founder of the group Let’s Talk and junior, and her team members met with students from Linguistics Club and Di-Verse, a student group centering around K-Pop. They sat around a conglomeration of tables covered with white butcher paper, colorful Post-It notes and bags of chips. As the group talked, Oh occasionally took a Post-It note and jotted down the main idea of the discussion at that moment. By the end of the session, the notes littered the paper.

This meeting constituted what Oh termed a “Post-It note session,” in which the Let’s Talk team met with members of other clubs to take a step closer to Oh’s overall goal of developing skills to have better conversations about possibly controversial topics. She said she started this initiative because she felt this school lacked a healthy environment for this kind of discussion. Last spring, after the deadline for creating new CHS clubs had passed, Oh began arranging meetings at CCPL with some of her friends who expressed interest in the idea of creating a solution to this issue.

“What we’re trying to do is focusing on the skills in those discussions, and making those skills more widespread and more accessible. To do so, we have to talk with those clubs that are already holding such conversations,” Oh said. “(The idea of the club) used to be a little bit vaguer at the beginning, but talking with more people has helped me hone in on what we’re focusing on.”

After a summer of these informal meetings, the time has come for CHS clubs to begin for the year, and Oh said Let’s Talk has now been approved to become an official school club, with social studies teacher Allison Hargrove as its sponsor.

A Start for Art

According to a survey conducted last spring of 246 CHS students of all grades, 63 percent of respondents said they know someone who has started a club. With this figure including the majority of students, Oh is just one of many students contributing to this school’s ever-growing number of activities.

The CHS website divides clubs into two categories: school-sponsored and student interest clubs, with the majority within the latter category. Last February, junior Hannah Kosc founded one such group, Slam Poetry Club, which focuses on writing and performing slam poetry. According to Kosc, she and Sophia Treasure, Slam Poetry Club vice president and junior, began their initiative with a group of friends, much as Oh did.

“We wanted to have a club where we could get together with our friends and do something creative, because we’re both really involved in the art community,” Kosc said. “Since there’s already Art Club, we were thinking, what else can we do to get involved since Art Club has ended now? (Art Club is) only a first-semester thing. So we thought of slam poetry because it’s a good combination of the arts.”

Kosc said she asked art teacher Andrew Murray to be the club’s sponsor, and Murray said he has so far mostly let the students develop Slam Poetry Club while he has taken a backseat role.

Murray said, “(The club is) one of those things similar to art, where people will come in, and, whether you know them or not, all of a sudden you put them in that setting, and they really, really do a nice job. You kind of wouldn’t expect or don’t even think about it, and all of a sudden they come in with this really well-constructed poem off of one of the subjects that we talk about. It’s just really impressive to see what a high schooler can come up with.”

Assistant Principal Brittany Wiseman, who is in charge of student clubs, said via email that this school has over 100 clubs. With so many extracurricular activities for students to choose from, some clubs’ descriptions and purposes are bound to overlap.

Wiseman said, “Before I take a club to the principal to be approved, I make sure we don’t already offer a similar club. We don’t want clubs competing for members based on the same specific interest.”

Despite this difficulty, Kosc and Treasure both said having similar clubs is not a problem, as long as the groups sufficiently differ from one another.

“Since we have more people, obviously there’s going to be more clubs. We have a diverse set of people here, and I think there’s a lot of clubs that suit a lot of people’s interests and needs,” Treasure said. “Let me relate (the diversity of clubs) to colors. It’s like there’s red, orange, yellow, green and purple, and then there’s red-orange. You get a variety of colors. There’s a spectrum of clubs and stuff. It’s not just black and white; it’s more like shades of gray, which I like.”

Murray said the variety of clubs at CHS provides a multitude of opportunities for students.

“As long as there is a set of rules that governs the clubs, and they’re okay and checked off because they have requirements, and they have a sponsor, specifically, I think it’s good that the students can create an idea and present it themselves,” Murray said.

Oh said this school’s wide array of clubs provides many opportunities for students, so long as their leaders maintain their quality. In addition, she said founding Let’s Talk has helped her learn to better appreciate the people who start clubs.

“When you’re an adult, it’s going to be super difficult to balance everything, like taking care of a family, taxes and all that, so it’s really cool to see a lot of high school students taking initiative and embracing this time that we have to do something that they’re interested in,” Oh said. “I’ve thought about (leadership) often, but it’s been nice to enact some of the thoughts that have been roaming around in my head.”

Although Oh’s method of starting her group differ from Kosc’s strategy, both leaders said they started these activities to fill a gap where something had been missing. For Oh, this gap was the void where an environment for good conversation could have been; for Kosc, it was the space Art Club left empty during second semester.

Wiseman said only students can decide whether or not there is an unfilled hole in the offering of clubs.

“I want (Let’s Talk) to be a pleasurable experience for everybody, and really just a time for growth,” Oh said. “Even if the solution that we come up with isn’t successful at all, (with) the process that we got to get there, I think it will be worthwhile.”