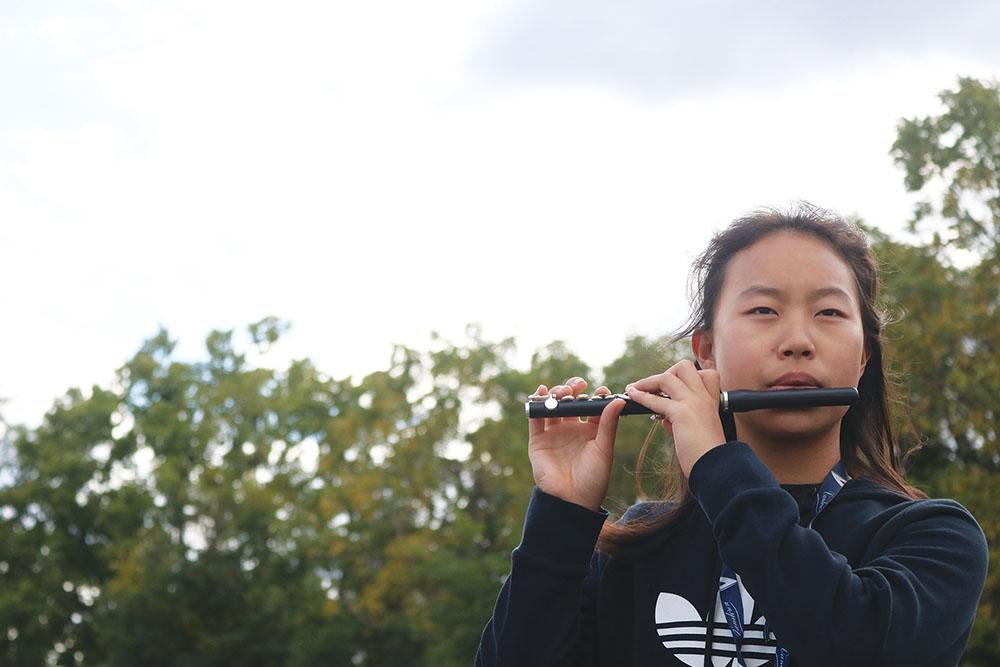 How did you get into Wind I?

I auditioned for it last year before school ended, and I played the audition music and, I played my ISSMA pieces from last year. I play two instruments: flute and piccolo. I think the ISSMA pieces showed off my technical skills.

Could you describe what it’s like to be in Wind I?

It’s very intense; walking in you’re like the small minority. Everyone’s just like big sisters and brothers; teachers are not very harsh on you because they know you’re a freshman. I think I like being involved, but it’s also very intense.

Are there any flutists that inspire you?

My private teacher (because) she’s really inspiring, and she’s very nice. She taught me a lot. I think the principal player last year, Colleen, (inspired me). I actually heard her play in a video from last year. I just want to be her when I’m a senior.

How did you feel when you got into Wind I?

I couldn’t believe it. I think I played okay in the audition. I did not expect to get in Wind I because Wind I is just hard. Especially as a freshman, flute is a very popular instrument (so) there might not be a lot of spots for you. When I got the email, I was crazy about it. I was screaming and I was like “Mom, I’m in Wind I!”

Do you compete outside of school?

I started doing ISSMA in seventh grade, and then in eighth grade I got seven gold rankings both in ensembles and solos. I think that’s an achievement: seven in two years. I did all-region band for seventh and eighth grade and Junior All-State for eighth grade. In eighth grade, I got into an all-state solo band. When I was in China, I won some district and national awards both individually and in groups.

What’s your favorite piece to play?

My favorite piece currently is “Andante” by Molique. I like it because it’s a beautiful French piece with a lot of grace notes and sixteenth notes. It’s slightly challenging, but once you master it, it sounds amazing.

When did you start playing flute?

What are your plans for the future?

With my flute playing, I think I’ll do it all four years of high school. It depends on if my college has band. If there’s no band, I think I’ll just continue playing during my free time because it’s a skill; you have to continue it.