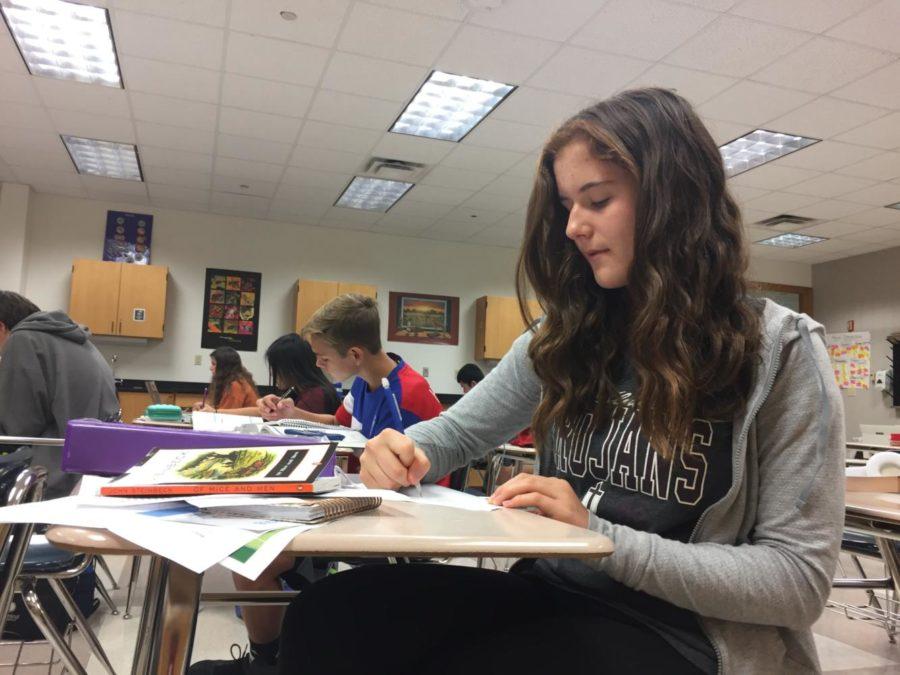 olly Shaffer, Best Buddies officer and sophomore, works on an English assignment during SRT. Shaffer said she is very excited to attend the Best Buddies Halloween party during SRT. “We are going to do it during SRT, which I think will make it more fun and hopefully more people can come since it’s during school,” Shaffer said.

Best Buddies plans to host a Halloween party during SRT on Oct. 20.

The party will include Halloween-themed games for members to participate in and lots of food. Club sponsor Dana Lawrence said she anticipates around 100 people to attend the party.

Lawrence said, “At the halloween party, we have cookies and snacks that they decorate and we do all kinds of stuff with pumpkins and play games. It’s just fun.”

Molly Shaffer, Best Buddies officer and sophomore, said she loves all of the Best Buddies events and is extremely happy she decided to join the club last year.

Shaffer said, “I was blown away by what I was able to do with [my buddy] and how involved I could get with other students. It’s just amazing.”

This is the second year the club is hosting a Halloween party, and Shaffer said last year’s party was a huge success and will look a lot similar to this year’s.

Shaffer said, “We had balloons blown up, we had toilet paper rolls to make mummies, everybody came in their costumes, we had tables and tables full of amazing Halloween food and everything was decorated. We had some games and some crafts we could do.”