Look What Taylor Made Me Do: With Taylor Swift’s new album “Reputation” scheduled to release next month, some fans are excited for its release, others are on the fence 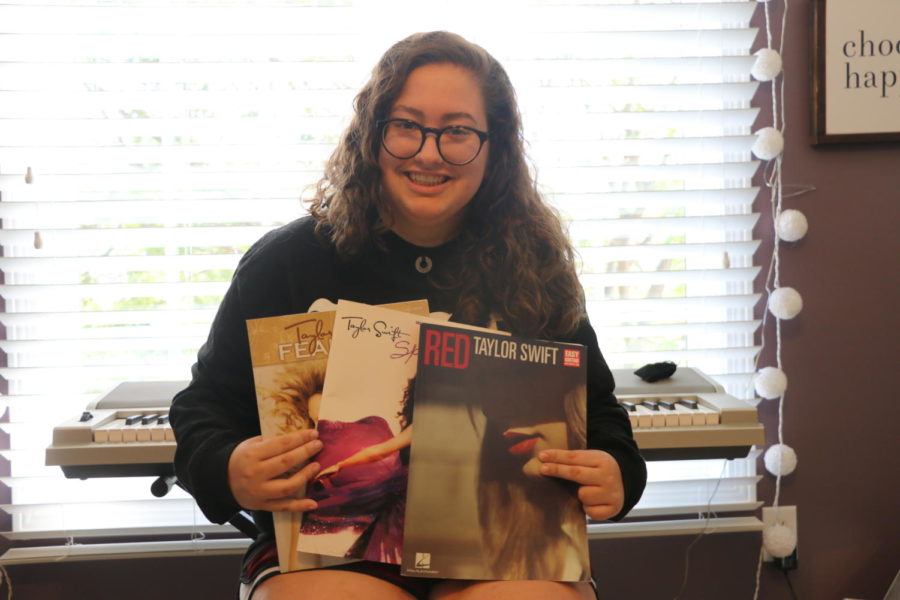 Junior Paige Thompson holds up three piano books of Taylor Swift’s music. Swift published the books to tell the story behind her music.

Junior Paige Thompson is one of the 14,010 fans who went to Swift’s last concert in Indiana in 2015.

“Her concerts are a lot like a theatrical performance to me,” Thompson said. “There’s a lot of stuff that goes in: the lights, the dancers. I remember that she had this really long runway, almost like a catwalk. Although she had this really big stage, I felt like she didn’t leave out a single part of the audience.”

Taylor Swift is one of the most popular singers of the 21st century. According to IMDb, she has released a total of five official albums and is working on the sixth, “Reputation,” scheduled to release on Nov. 10. Swift has received many awards including 21 Billboard Music Awards, 19 American Music Awards, 10 Grammy Awards, eight Country Music Awards, and one Emmy Award.

Swift’s first four albums have been primarily country music. However, Swift’s latest album, “1989,” has shown a shift from country to pop, and Swift’s album “Reputation” will follow the trend, according to Charlie Harding, producer and co-host of the podcast “Switched on Pop.” According to Harding, the podcast is where he and co-host and musicologist Nate Sloan deconstruct how a pop song is made and what it means. To Thompson, the shift in music style was different but not unwelcome.

“For me, I didn’t like (the new songs) at first,” Thompson said. “But after I found the meaning behind the lyrics and saw how she’s really improving, I liked them a lot more.”

However, other supporters are not fans of the new style of music by Swift, like sophomore Madalyn Sailors.

“I think (her music) sounds more mainstream, which is definitely the direction she wanted it to go. I think it’s cool, and I like the music still, but it’s not as personal to her or to me,” Sailors said.

However, Sailors said she will continue to follow Swift despite not being a fan of her new music.

“I still really like her and still am really excited for her. She’s been in a lot of drama recently, which I’m not a fan of, but I’m still going to stick with her and still gonna see what she does later because I value her a lot as an artist,” Sailors said.

Harding said one reason why Swift continues to stay popular and relevant is because of her fanbase.

as a dedicated and enormous fanbase,” Harding said. “Millions of people listen to Taylor Swift. When they hear her lyrics, she has a magical connection to her audience. People read into her lyrics personally, trying to understand Taylor. It connects really powerfully with her listener base.”

Despite the continued success, Swift is a part of many scandals and celebrity gossip, according to Harding.

“She is treated with idolatry and sort of a childlike disrespect. I think her gender, her age and her subject of her music are used by the media to discredit her,” Harding said. “They tend to be more wrapped up in her relationships and in her scandals because that’s the typical media portrayal of young women.”

Sailors said she agrees the media has portrayed Swift in a negative light. However, Sailors also said Swift uses how the media portrays herself to her advantage.

“I think she uses this to impact her artistry. Recently, because of the drama she’s been in, I think it’ll really change what ‘Reputation’ will look and sound like,” Sailors said.

Harding said he also believes Swift uses events that surround her to change her music.

“She seems to be displaying an evolving identity to songwriting, to obviously her relationships and to the media and the perception of her identity,” Harding said. “Her music has shifted in her career from primarily focused on her love songs to celebrity love interests to now the upper-echelons of media criticism, and I, along with many listeners, hear that she’s trying to change the perceived identity of Taylor Swift by changing how she’s orchestrating her songs and tones of what she’s making.”

Thompson said she agrees with both Harding and Sailors. She said she believes the media has been portraying Swift in a bad light.

Thompson said, “People take everything Taylor does to a whole new level, and it’s to a point where she doesn’t have any privacy. It’s just so ridiculous and has nothing to do with the music she makes.”

Despite the negative image the media portrays her as, Swift’s fans will continue to support her.

“I think people change. That’s totally natural, and it’s exciting to see. Even if I’m not as big of a fan as I used to be, I don’t believe in ditching someone because you don’t like where they’re at,” Sailors said. “I think being a fan of someone means that you’re with them wherever they are because (Swift’s) even going to change in the future from where she is right now.”