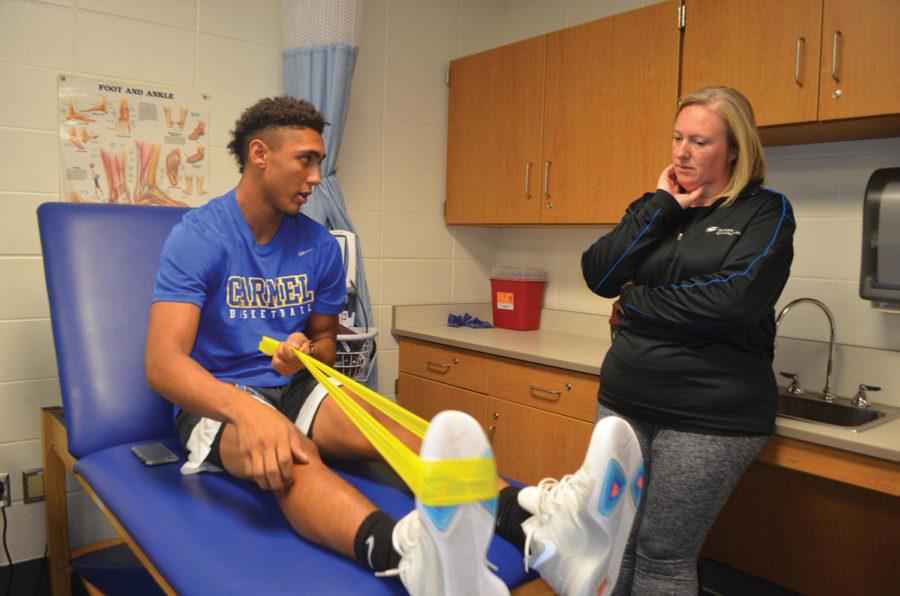 At one school practice last November, Eddie Gill, basketball player and senior, took a fall that caused an injury that will keep him off of the court until the middle of January.

“After we shot free throws, I was walking to the water fountain and I just took a step and my knee kind of gave out. Then, when I got it checked out, I got an MRI and everything, and it turned out that there was a stress fracture there and it had just been building up over time,” Gill said.

Gill said he had to have surgery on his knee and has since then been icing his knee every hour and doing exercises to regain mobility several times a day. He said the injury was an accident, and he has had problems with the same knee before. With this injury, Gill has been working with the athletic trainers and the basketball program to get back to playing for the final half of his senior season. 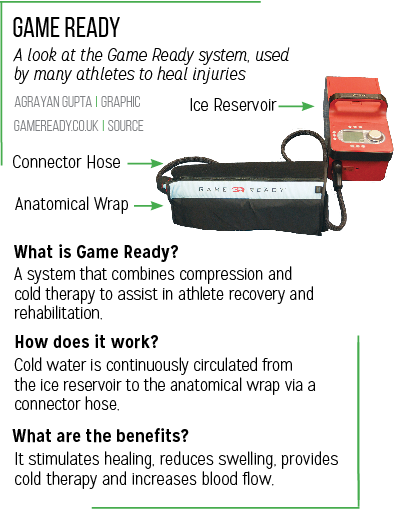 Athletic Trainer Anna Foster explained the general protocol that an injured athlete must take when visiting the trainer. She said trainers will alter the process depending on the injury and the speed of its recovery.

“Essentially what happens is when a kid gets injured, they’ll come in to see us. We’ll do an initial evaluation to determine what we think their injury is. If we think that it’s something a little more minor that we can take care (of), we don’t typically send them out to get any X-rays or to see a physician. We take care of all of that in here, in our office, and we’ll do all the rehab and get them back onto the court, field as fast as we can,” Foster said.  “If it takes usually more than ten days to two weeks, where a kid is just not getting better or it’s not doing well, then we will determine that there is probably a little more anatomy issues than we determined to begin with. At that point, we get our physicians involved and have (the student) see one of our team physicians and then we kind of take our steps from there with X-ray, MRI, whatever the injury may need.”

Alex Baldwin, student Athletic Trainer and junior, helps the adult Athletic Trainers during different sports seasons and said he witnesses what trainers typically say to an athlete who goes to the trainers with an injury.

“They just let (the athlete) know that they are going to be okay, and they run them through what exactly happened to them. It teaches them about their injury, what they need to know, how to treat it, how to get better, what they need to do therapy-wise, and overall, they just help them work through it,” Baldwin said.

Foster said the recovery process may take longer because the trainers try to get the athletes back to the court as soon as possible while also being safe and making sure that an injury is healing properly.

“What could be a short-term injury—like an ankle sprain that typically takes ten days of complete rest to heal—would be better but we don’t get to work with that type of time,” Foster said. “We try to get them out there a little bit faster, but we know that that’s going to delay their healing time a little bit, but as long as we’re doing that safely we’re okay with that.”

In order to heal, Gill said he does a series of exercises multiple times a day to regain mobility in his knee.

Foster said before an athlete returns to his or her sport, she talks to them about injury prevention, especially about how the athlete can prevent an injury in the same area.

Foster said, “So a lot of people think athletic trainers are people that go out on the court or on the field when someone is injured, but we do a lot of preventative type of medicine as well. There are things we will work with after an injury in accordance with our strength and conditioning coach and work with them in the weight room, give them exercises that we expect them to continue to do even though they’ve reached their full return to participation. So we have that expectation for them to continue their rehab and (continue) a great strength and conditioning protocol.”