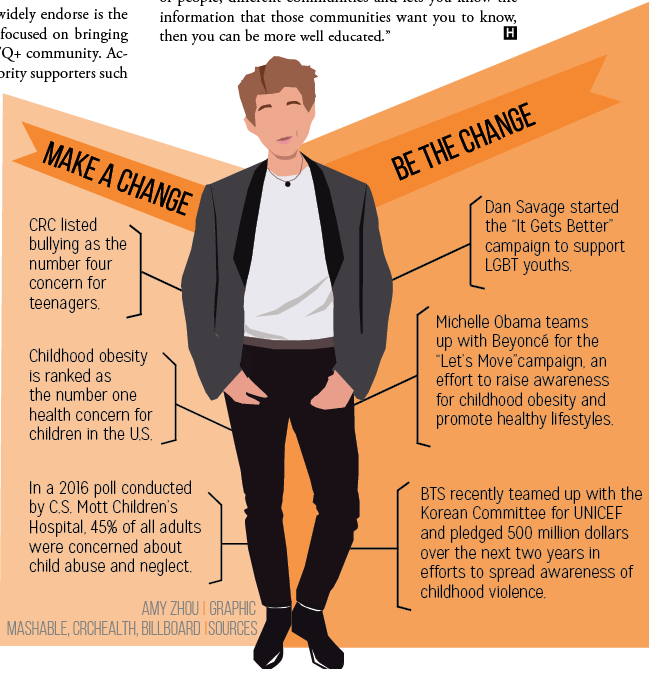 BTS, one of the most representative korean pop (K-pop) boy bands, launched their “LOVE MYSELF” campaign to support UNICEF’s prevention of violence against children and teens this year. According to the K-pop group, the meaning behind the trending hashtag is to “Find love in myself, embrace people and society in a larger sense with love.” According to the campaign’s website, BTS donate

d $500,000 and will be donating a portion of their income from album and merchandise sales to the campaign.

“It helps the campaigns that UNICEF starts gain global impact and reach audiences that might not have heard about their campaign previously,” she said. “Especially with social media and the entertainment world, they have a lot of power on their platform to advertise for things like this and it helps a younger audience understand it better.”

The influence celebrities like BTS have on this generation can be partially credited to the extensive reach of social media. December is Universal Human Rights Month, and some question whether public figures should use social media platforms to spread awareness on different social issues regarding human rights such as violence against children and lesbian, gay, bisexual, transgender and queer (LGBTQ+) rights.

UNICEF officer and sophomore Viha Bynagari said after discovering BTS on YouTube and from her friends, she became a fan of them over the past several months. She shares a similar perspective to Sinha’s and said she loves that the K-pop group is spreading awareness and getting involved with UNICEF.

BTS is also the first Korean artist group to raise funds as part of a social fund for a global campaign.

Sinha said, “I think (international support) is important because in the past, (UNICEF) had a lot of celebrities that are based in America or Europe so to have a global impact and a global reach, it helps UNICEF and campaigns like this really reach a more holistic audience than just a specific country.”

According to student services coordinator Britney Coats, a licensed social worker at Clay Middle School, awareness is not just important because it allows people to be more educated, but it also helps people learn how to help and support the campaigns themselves.

“There are times where there are different tragedies in the world and people want to be able to help, but they’re not aware of how they can so sometimes different public figures who are in support of different organizations can be helpful. That brings awareness to people as to what they can do to be able to help as well,” Coats said. The effect celebrities have on fans contributes to this awareness as fans hope to support the same interest of their favorite artists.

Another organization celebrities widely endorse is the Human Rights Campaign, which is focused on bringing equality to all members of the LGBTQ+ community. According to its website, numerous celebrity supporters such as Lady Gaga, Elton John, Whoopi Goldberg and Caitlyn Jenner use “their place in the public eye to advance the movement for full equality for lesbian, gay, bisexual, transgender and queer Americans.

Maya Birhiray, Gay-Straight Alliance co-president and senior, said, “I definitely think (celebrities) should (support organizations). I think that bringing light and starting a dialogue is what’s really important because a lot of people look up to celebrities, and it’s really important for those people to start dialogue and let their followers know that ‘I support this cause and you should too for ‘xyz’ reasons.’”

Sinha, Bynagari, Birhiray and Coats all said that celebrities have the capability to influence young minds through their social media platforms and awareness should be spread throughout schools as well in order to achieve a more accepting and educated student body.

“School is the building block for the rest of your life. Whether you like it or not, you learn a lot in school and a lot of what you learn in school you take with you,” Birhiray said. “I think that if you have a positive school environment and the school educates you about different kinds of people, different communities and lets you know the information that those communities want you to know, then you can be more well educated.”