Homework for the Holidays: As winter break starts Dec. 23, students of minority religions reflect on holidays, the school calendar 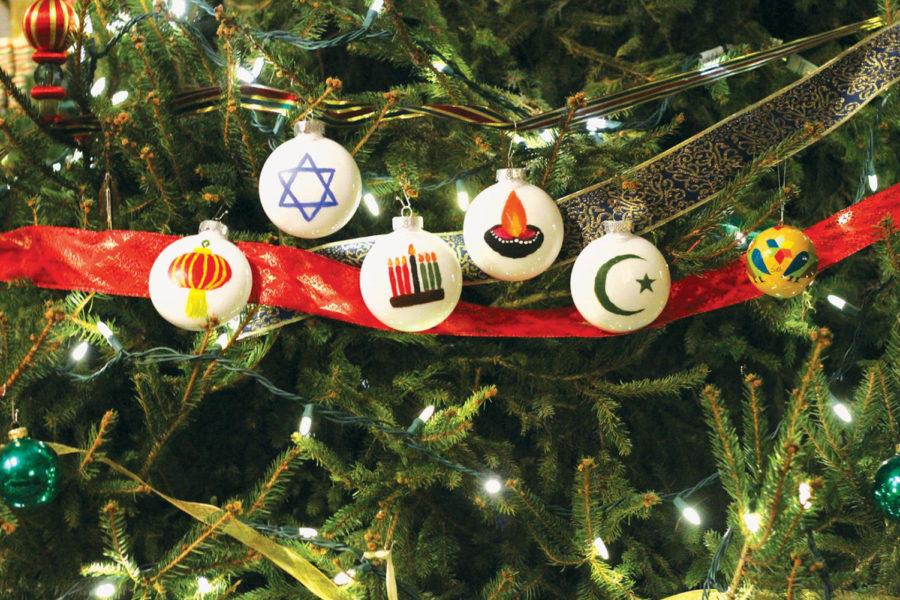 Last year, Hannah Kosc, Jewish student and junior, said she was unable to take a day off of school for an important Jewish holiday: Yom Kippur. Instead of reflecting and taking time to spend with her community, as is the tradition on the holiest day of the year on the Jewish calendar, Kosc came to school to take her math midterm.

“It was really unfortunate and I was pretty upset, because I wasn’t able to take the day off to attend services or spend the holiday with my family like I usually do,” Kosc said. “That was pretty hard for me because it’s something that I’ve done since I was a kid, so that affected me in a very negative way and ultimately really hindered my ability to observe the holiday.”

This year, winter break begins Dec. 23, and while many students have expressed displeasure at winter break’s proximity to Christmas, for a significant number of other students, like Kosc, school often inconveniences their religious observances.

“I take a pretty full course load and I try to avoid missing school in general because that’s like having a full day to make up at home on top of the next day’s work,” Kosc said. “Whenever I miss school for anything, I end up having to do work while I’m gone. That’s especially awful on Yom Kippur and Rosh Hashanah, because those two holidays are really really important, and the whole thing is like you’re supposed to take a step back and just be with your family and the people who matter to you. It’s hard when I have to, I don’t know, write an English paper on the day where I’m supposed to be in temple and with my family.”

Like Kosc, Chendi Liu, Chinese student and sophomore, said she misses school every year for a cultural holiday, Chinese New Year. Last year, Liu said she went to China for a week and a half to celebrate this holiday with her extended family.

“The celebration is actually 15 days long, but I usually don’t go to school the day of Chinese New Year’s Eve or New Year’s Day,” Liu said. “It is excused because it is a cultural holiday.”

According to the student handbook, Liu is correct that recognized religious holidays are indeed excused absences and do not count against Skip-a-Final, but students are still responsible for any work they miss.

Assistant Superintendent Amy Dudley is part of the committee that makes recommendations for the school calendar. According to Dudley, there are 36 people on the calendar committee this year.

“The committee is made up of teachers, parents, administrators (and) students,” Dudley said. “We look at information, we get stakeholder feedback information and we determine that calendar.”

In regards to the decisions the calendar committee makes to determine which holidays the schedule will accommodate, both Kosc and Liu said they understand why their cultural and religious holidays are not official days off from school.

“Overall, I understand that the school is a secular organization and it isn’t religiously affiliated, and therefore shouldn’t be required to recognize these holidays, but at the same time it would be wonderful if they did and if they were more inclusive as a whole,” Kosc said.

According to Dudley, the holidays in the school calendar are those federally recognized by the government; in addition to these national observances, another aspect the committee keeps in mind is the number of instructional days for each semester, and, more broadly, the opinion of those on the calendar committee and what the community desires overall.

As far as the reason why Christmas has always been included in the winter break, Dudley said that may just be a coincidence.

“What we try to do is make sure that the first semester ends before winter break, and the reason for that is for our students to truly go on a winter break, where they’re not thinking about studying for finals over (break),” Dudley said. “But also for our mid-year graduates…we have about 50 to 60 of them, and some of those students may be going right into classes that next January, and so we want to make sure they’re finished (with high school classes). Another (reason), too, is for our students, especially our seniors. Sometimes, universities and colleges are waiting for that first semester transcript before they make a decision on acceptance or what have you, so we want to make sure we can get that wrapped up so that they can get their decisions finalized as well. That’s another parameter we do put upon ourselves as far as (planning) the calendar.”

Both Kosc and Liu said taking days off to celebrate their respective holidays has many academic consequences, mainly in the significant amount of work they need to make up upon their return.

“I think that when teachers schedule assessments on (those religious and ethnic holidays), it’s not necessarily considerate of those students who will be gone,” Kosc said. “Teachers assign so much work on those days (that I’m gone) because they don’t necessarily think, ‘Oh yes, this kid is away for a religious thing so therefore I should tone it down a bit so they aren’t penalized for being a certain religion.’ But it still ends up that way because I do get back and there’s just this huge pile of work waiting for me, and sometimes I just get behind or it elevates my stress level.”

Liu said she agrees with Kosc in regards to the stress level after taking days off, and said she will not be going back to China in future years due to the amount of make-up work and because Chinese New Year falls during choir competition season. 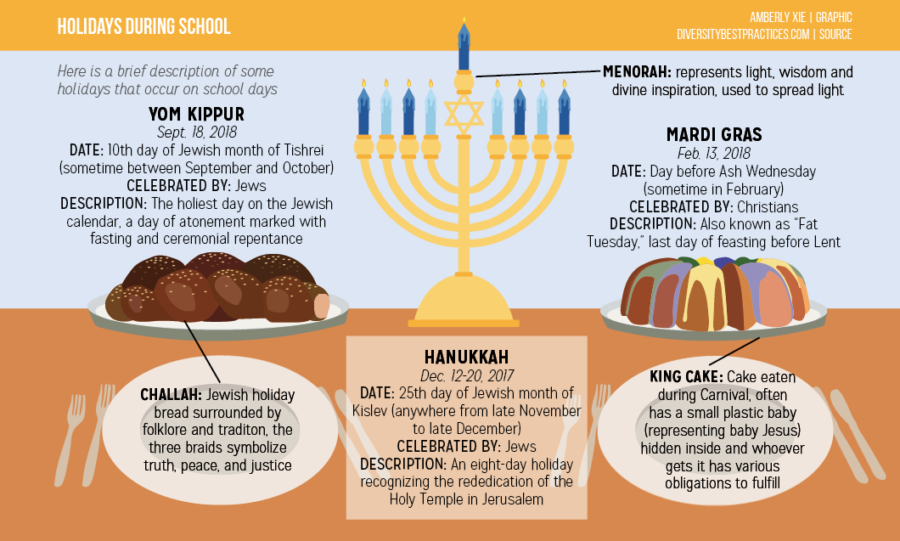 Kosc also said because of her heavy course load, which consists of seven full-weighted classes, she doesn’t necessarily want to get an actual day off assigned by the school district; rather, she would like greater accommodation from the staff in regards to the work assigned on those religious holidays.

“I feel like it’s more of just a thing where the teachers need to be aware and be made aware by administration of these holidays and their occurrences so they don’t load on all of the assessments,” Kosc said. “I understand that a lot of teachers aren’t intentionally insensitive, but then there are things like my math midterm being scheduled on Yom Kippur and that’s a really important holiday. People just need to be made aware of the holiday, and then it needs to be enforced. I can’t really enforce punishments for teachers for giving tests on major holidays; it’s just like an urging of staff to be aware of those kids so it’s not very exclusive in that sense.”

“Teachers generally treat (a religious holiday) as a sick day, like, ‘Okay, you have to do work.’ There are some teachers that understand, but I feel like teachers have to understand flexibility won’t kill you,” Tajwer said. “If teachers are just willing to sit down and understand people going to religious holidays are not trying to skip school, it’s actually an important part of our faith and practices. What we need in this community is dialogue: dialogue between students and dialogue between students and teachers, because one size does not fit all, and if people just talk about the differences and how they can plan around things, it will work a lot better—better for teachers and better for students.”

“Other holidays, we don’t take those days off, but students do take religious holidays off, and that is certainly something they have the right to do; it doesn’t count against their attendance,” Dudley said. “As far as planning times, what we try to do is we look at the different religious holidays and we try not to plan

major tests on those days and things like that so that when students take that off, they don’t come back and feel like, ‘Oh my goodness, I missed all of this stuff.’ We try to be very conscious of all of the different religious holidays so that students may take those (days off). We want to make sure that we’re being very

conscious so that they’re not feeling like they’re coming back and are really far behind. ”

Tajwer said overall, students and staff alike need to understand both religion and academics are important and students should not be forced to choose between the two.

“You have to understand that academics are essential to a good student’s life, but religion is just as important for someone’s mental and spiritual well-being,” Tajwer said. “Severing that link and not taking (off) that actual day one day to be able to fulfill your religious rites and stuff like that, it kind of feels like a sense of faith is lost because you aren’t able to be a part and practice everything like it ought to be, so I personally feel like taking one day off isn’t that big of a deal, but those religious memories, those experiences and events, are irreplaceable, and you aren’t going to make that up 10 days off the line.”

Liu said she agreed with the statement and said she believes both culture and academics are important. However, Liu said what matters most is not the school’s opinion, but rather the student’s priorities.

“The school doesn’t do anything to stop you (from missing school for religious reasons), and it’s written in the school handbook that (religious and ethnic holidays) are an excused absence, so the school doesn’t do anything,” Liu said. “I think a lot of it is just determining (the holiday’s) importance to yourself. If you think it’s important, you’re going to put in the effort before and afterwards to get your homework done and stuff.”

Ultimately, Tajwer said he wants CHS staff and students to understand the differences between religions and have greater acknowledgement for students of all religions and ethnicities.

Tajwer said, “I feel like for the people who are upset about (winter break being so close to Christmas), they need to understand that it’s not really a rare thing for people who aren’t Christians to have to sort of do some juggling and sort of have to plan around things with school and sort of have to deal with awkward dates. While they do have the right to complain about the whole thing and talk about how maybe it shouldn’t be right before Christmas, they also need to understand other people have been doing this for the longest time with their religious holidays.”