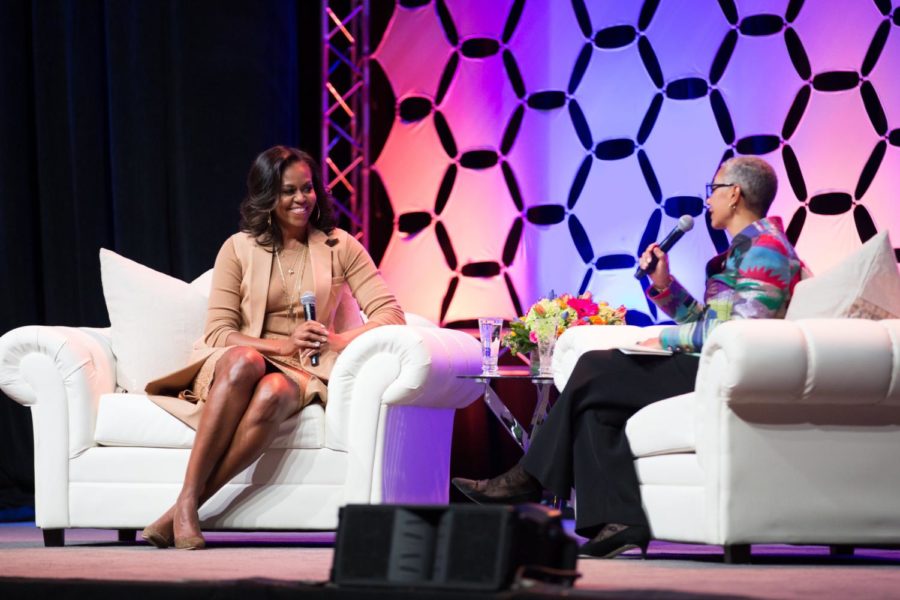 Former First Lady Michelle Obama spoke with moderator Alecia DeCoudreaux in the Bankers Life Fieldhouse on Feb. 13. After being greeted by a screaming audience and a standing ovation, Obama discussed her upbringing, her time in the White House and what advice she would give to the 12,000-strong audience. Here’s what stood out most to us.

“You don’t get anywhere in life without people holding you up.”
“A lot of young kids think that role models have to be far away…but for me, the most important role models are right in front of you.”
(On her childhood) “There was so much support in the small things.”
“Kids don’t need stuff. We were working-class poor folk…Parents need to realize that it’s the time in that matters.”
(Describing how her mother Marian Robinson responded to others who asked her how she raised Michelle and brother Craig) “There are millions of Craigs and Michelles. They’re nothing special.”

Delving into life before the White House, Obama spoke about the importance of familial connections–she grew up with her extended family living just minutes away. Her commentary about the practicality and constantly unimpressed demeanor of her mother (who immediately moved back to Chicago after President Barack Obama’s second term ended) drew laughs from the audience.

On difficulties of being a woman of color:

(On children of color reacting to discrimination) “They’re constantly thinking, ‘What did I do?’”
“You have to practice achieving through other people’s low expectations of you.”
“Women are socialized to put themselves third, fourth, even last.”
“There are very mediocre people out there who run stuff, but nobody out there told them they can’t.”
(On prejudices against children of color) “They’re me. I’m the kid you’re afraid of.”

Obama talked about America’s support for a “culture of racist people.” For children who grew up with a fear of failure, Obama said that in order to “put yourself in the game,” they needed to realize that they were just as smart and often smarter than the people who told them they couldn’t.

On modernizing the role of First Lady and nationwide fashion icon:

(On starting a mentoring program in the White House) “I used to be the kid standing outside.”
“I never sought to make a fashion statement. I approached clothes the way most women do: I wanted to look cute. That was my goal: to be cute…Fashion has to work for you. You shouldn’t work for fashion…The cameras were there and all of a sudden, you’re a fashion icon. I was like, ‘Okay, whatever.’”

Obama discussed the importance of being comfortable around other people as a prominent figure in Washington. She wasn’t always perfect, she said, but being authentic made it easier. As First Lady, Obama spearheaded education, healthy eating, and exercise programs aimed at kids. Some of her favorite moments in the White House involved playing with children. Referencing her childhood, Obama discussed how growing up on “the other side of the fence” and wondering what it was like in the White House drove her to launch a White House mentoring program for students.

“You can’t pull yourself up by the bootstraps if you don’t have boots.”
“Kids know when they’re not being invested in.”

When DeCoudreaux asked about what advice Obama would give to young adults growing up in broken homes, Obama recalled seeing other children who had grown up in similar situations on the South Side of Chicago. There was no use in delivering empty “platitudes,” she said; the better choice was to actively improve the problem. She launched into an anecdote about a child who grew up neglected at home and treated as a lost cause in school. “Now he’s in jail,” she said, “and you wonder why.”

“Don’t be afraid to disagree with others at the table.”
(On picking a career) “When you know who you are, nobody can take that from you.”
(On becoming a public servant) “Please, have some knowledge about something.”
(On the status of women) “We’re not really fighting. We’re losing the leverage that we have.”
“If you don’t vote, you are essentially letting Grandma choose what country you live in. You love Grandma, but you won’t even let her pick out shoes for you.”

Obama emphasized the key role of public servants–not just politicians–in the betterment of society. In a not-so-subtle comment about current president Donald Trump, she lamented that women all over the nation had voted for a person who did not advocate for their rights. Women, she said, were “everywhere:” they were politicians, doctors and educators. What they needed to do was make themselves heard.