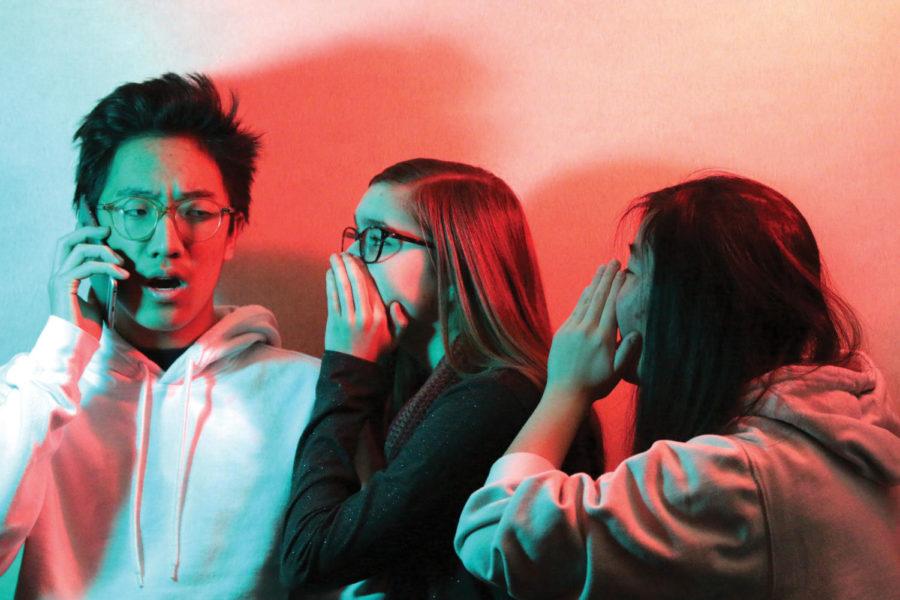 Last month was an active one for CHS. On Feb. 8, a young boy accosted a girl with a paring knife in a bathroom. On Feb. 13, there were two altercations during the school day. On Feb. 14, the administration was made aware, by students, of a rumor about a possible school shooting. On Feb. 15, there was an incident in the lunchroom in which a student with special needs had a behavioral struggle. All of these incidents culminated on Feb. 16 when around 1,500 students were absent from school.

Many of those absences resulted from students’ and their parents’ fear and apprehension. Much of that apprehension, however, was based on information spread through secondhand channels, better known as the rumor mill. Indeed, according to a Carmel Clay Schools press release made on Feb. 15, administrators acknowledged many of these incidents were due in part to the accumulation of rumors.

According to BethAnne Betzold, the subject of a previous rumor and senior, the rumors were dangerous and ridiculous.

“If you do fear someone or if you want to bring fear onto people, having an anonymous rumor will bring that fear in as we’ve had in the past,” she said. “All those (school shooting) threats were just rumors, but those rumors incited panic and hysteria within CHS. It kept spiraling into chaos and it was crazy, but it happens. We just have to be ready to know if it’s real or not.”

However, being able to distinguish between truths and rumors may not be as easy as it seems. According to the American Psychology Association, people tend to spread rumors that they believe to a certain degree, regardless of how ridiculous the stories are. The research shows when anxieties are intense, those who spread rumors are less likely to actually analyze the credibility of what they pass on to others.

Principal Thomas Harmas said that the school faculty and Carmel police department were able to react quickly thanks to the students’ quick reports.

Additionally, according to a recent study conducted by the Pew Research Center, two-thirds of Americans said they get at least some of their news through social media. AP Statistics teacher Matthew Wernke, who actively stopped one of the physical altercations, said platforms such as Snapchat and Instagram provide a built-in audience to spread rumors, which creates a problem with credibility and trust. 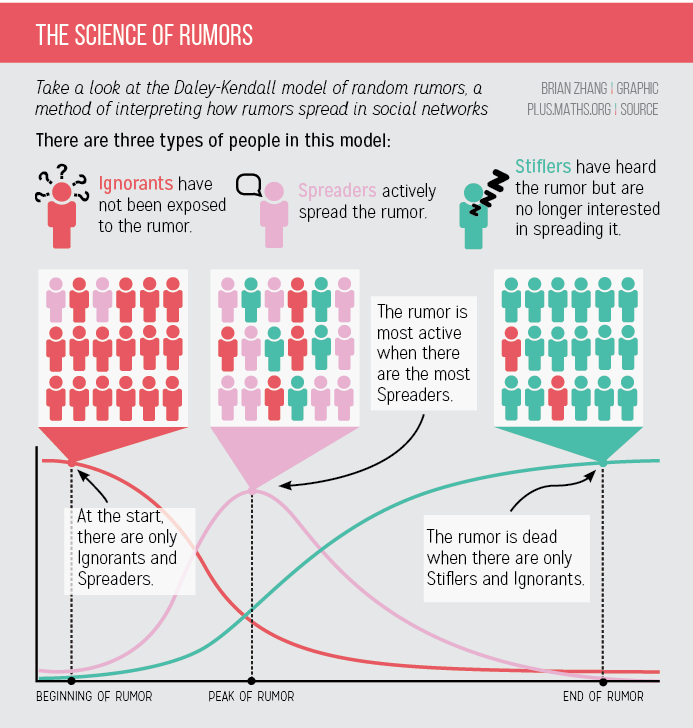 “When I was at school, if you told someone (information), the only way to communicate was face-to-face or over the phone, so you were less likely to make something up, (you were) less likely to exaggerate,” Wernke said. “Today it’s not a big deal to post something then turn your phone off; it’s like you didn’t do anything wrong. I think things are so instantaneous today. You think of something and you just do it.”

Betzold said she agreed with Wernke that technology has made the spread of rumors more prevalent.

“With the use of social media and having so many people (at CHS), (rumors) can kind of spread like wildfire,” Betzold said. “(A rumor) could start out as just this little spark, but with as many people as we have, (the number of students) fuels (the rumor) to grow even bigger.”

An example of this is the Instagram account @carmelhellweek, created primarily to post jokes about the events that occurred during that week. The account has been up for less than a month but has amassed almost 2,500 followers.

Wernke said the rumors that were spread during that particularly anxious week in February affected the environment surrounding CHS.

“There was a bell that went off around first period towards the end of the class (last month). Somebody pressed the intercom or something, but if that happened anytime before three weeks ago, I wouldn’t have thought anything about it,” he said. “But as soon as it went off today, I immediately thought ‘Something bad has happened.’”

The timing of the Florida school shooting at Marjory Stoneman Douglas High School on Feb. 14 caused the tension throughout CHS to rise even higher, leading to rumors of a shooting at CHS.

Harmas said he has since reflected on administration’s reaction to the events of that week.

“One of the big mistakes was in the video that I made. I wanted to make sure that we dispelled the rumors because they were rampant, but I should have taken time to acknowledge how people were feeling, especially after Parkland. I choose just to focus on the rumors and really did not think that through enough. If I look at it in my point of view, than that would be something I would have definitely like to change.” 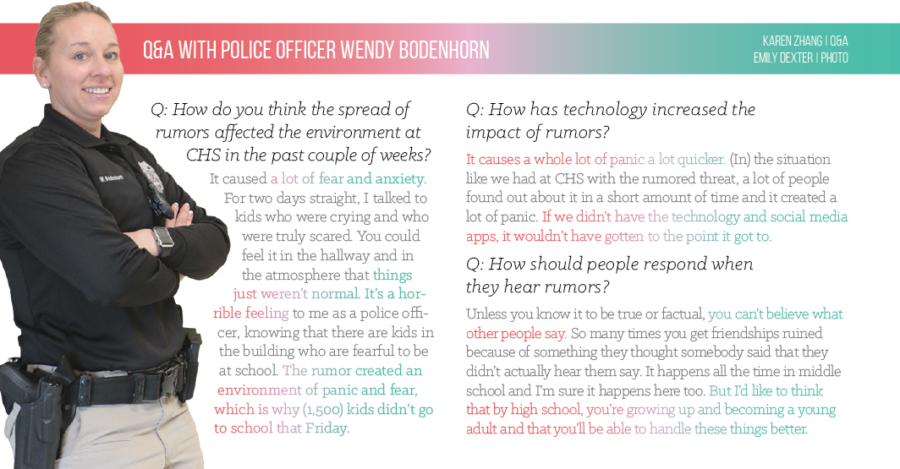 Wernke said, “(The threats) put all of us on edge even though most of us know they were all rumors. I think (the threats) make everybody put a little extra thought into thinking, ‘Okay, something bad is about to happen,’ which is not what school should be,” Wernke said. “You shouldn’t always go to school thinking that when you hear the intercom noise, something bad just happened.”

Another reason rumors spread besides fear, as stated by Rumor Psychology, is to improve one’s social status.

Both Wernke and Betzold said although the spread of rumors can instill false fear in many minds, they can also be damaging to individuals.

“I don’t like rumors,” Betzold said. “I don’t like hearing them, I don’t like spreading them because—and this is just me—it kind of hurts me. Talking about ‘this person’ in the way that you are just damages either your psyche or their psyche or their opinions of you. It breaks my heart when I hear rumors because I don’t want to hear them.”

Wernke said he agreed rumors can be hurtful to people who are the subjects of them.

He said, “It never feels good for someone to say something that isn’t true about you. I think people work their whole lives to have a certain image, to do things a certain way, and when someone says something that’s not true, it becomes an attack upon your person.” 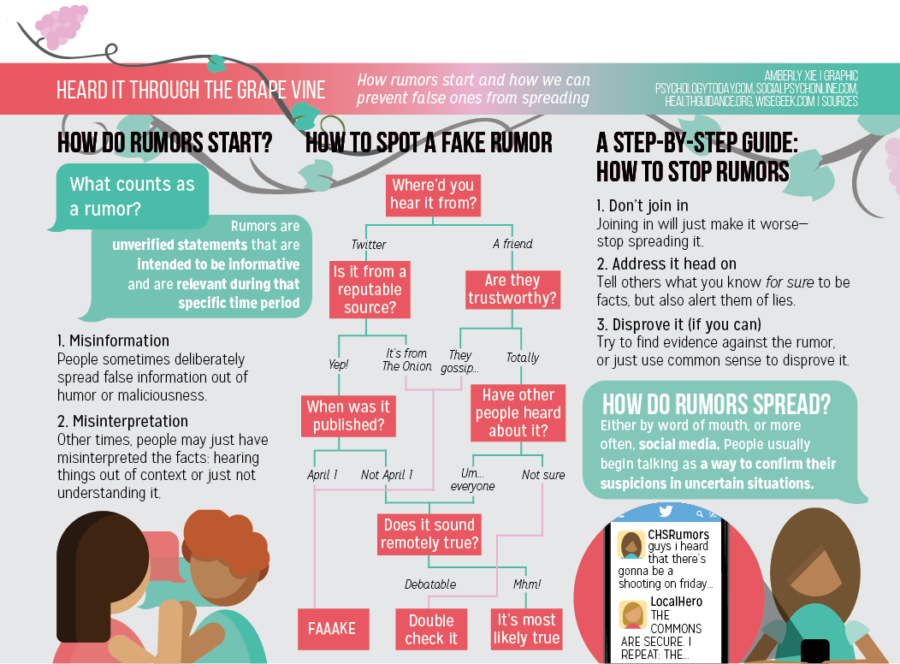 Betzold said people should stop spreading rumors because of the negative effects they may have to both surrounding environments and the individuals.

“If you don’t think it’s credible, don’t believe it,” she said. “There are others ways to make yourself feel better about yourself, so please don’t spread rumors. It’s not a good thing and it won’t help you because if (the people who heard the rumor) find out you were the cause of this rumor that actually damaged the said person, it’s just gonna bring your credibility down instead of bringing it up.”

Wernke said he agreed one way to stop the spread of rumors is to fact-check the credibility of the rumor.

“I think you should always question (a rumor when you hear it),” Wernke said. “My first thought when someone tells me something is always, ‘Does this seem plausible with the information I know about the situation? Is the person who is telling me this reliable?’ We all have those friends who say things that we aren’t sure if what they’re saying is true. It’d be nice if people just—unless they knew it was factually true—would not share the information, but we know that won’t happen.” 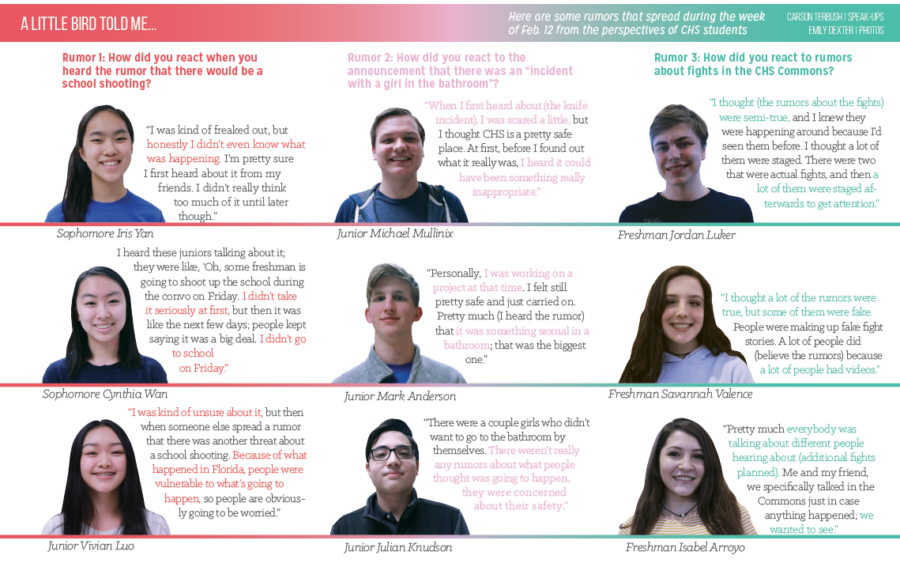