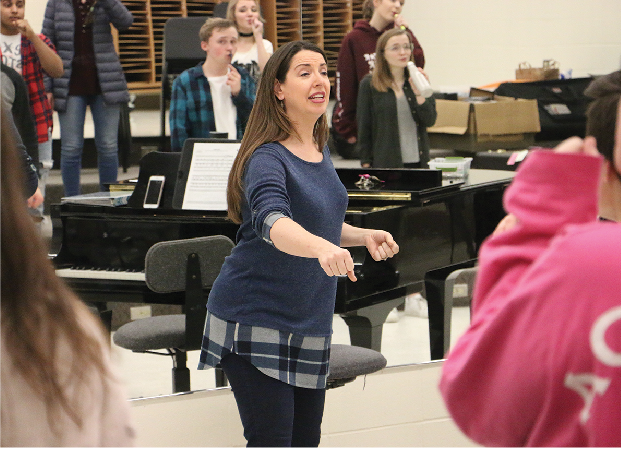 SING IT: Director Katherin Kouns gives instructions to the class. A capella groups rely solely on the sounds that are produced from their voices and other instrumental sounds from beatboxing, snapping or clapping.

As a school with 10 choirs, Select Sound prepares to take the stage as a single choir for the second year in a row. The concert, “Ear Candy,” will entail a multitude of pieces, sung a capella, by the choir.

“Last year was the first year we had ever done an ‘Ear Candy’ concert,” choir director Katherine Kouns said. “It is a great concert where (Select Sound) showcase a bunch of music that they have done throughout the year plus some new stuff.”

Since it is only the second year, Kouns said the 2018 concert will differentiate from the show last year.

“The big difference is that, last year, people didn’t know what (‘Ear Candy’) was. It was the first year we had ever done it and people didn’t know what it was or what it was going to be,” Kouns said. “Now that it’s been done once, I think there is more buzz and excitement about it and I think people are really going to enjoy what they see and hear.” As the choir department’s only a capella choir, the group of 20 focuses on several different types of pieces throughout the school year.

“We have a huge repertoire of songs, we like to hit all of the genres. We have classical, pop, jazz and more,” Brooke Sullivan, Select Sound member and senior, said.

A few songs the group will sing at ‘Ear Candy are’ “Home,” by Phillip Phillips, “Let It Be” by The Beatles, and “Man in the Mirror,” by Michael Jackson. The concert is expected to be 90 minutes long.

“A capella is so pure and it is easy to connect with people because you don’t rely on background music to help push the music forward,” Evelyn “Evie” Harrison, Select Sound member and sophomore, said. “You connect with the song and the audience.”

According to Harrison, to be a part of Select Sound there are music techniques and skills to acquire.

“To be a part of Select Sound, you have to be good at style- jazz music, pop, classical- it’s cool because you use the same voices in different styles,” Harrison said.

Because there is no accompaniment (commonly thought of as background music) the choir has to overcome different aspects of music that the other nine choirs may not have to face while rehearsing or performing. According to Sullivan, the group works hard to achieve new levels of a capella singing and they said they consider the group to be “one big family.” “(Select Sound) is a very small group of students who are very high-level musicians who sing so well and who really are great at creating tight-knit harmonies within their own voices,” Kouns said. 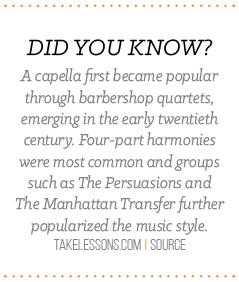 However, Select Sound was not considered a “real choir” at CHS until a few years ago.

“When I came to this school, there was a choir called Select Sound, but it was a women’s ensemble. We were looking for a way to morph a choir into an a capella choir, so we used the name Select Sound because it fit so well,” Kouns said. “We shifted it and it’s been an a capella ensemble for almost three years.”

As each choir at this school is different and portrays a different style of music and performance, Select Sound uses its a capella specialties to create performances that incorporate many genres of music, as other choirs may not.

“This time around we have a lot of pop songs and a lot of Pentatonix songs,” Harrison said. “We don’t always have songs to fill up the entire hour and a half, so we create small groups and meet with them on our own time to learn the music by ourselves. Sometimes it will be all guys, sometimes all girls, you really hear different contrasts of groups. We really have every style type. Each choir also dances a little bit, but (Select Sound) doesn’t do much dancing.” Because ‘Ear Candy’ is Select Sound’s own concert, it gets to have its own “choir personality.”

“We are so different from Accents,” Sullivan said. “We are vocally advanced and intimate with our 20 person choir because as a smaller group we get to know people and know their voices. We have different people each year so we get a new sound each year, too.”

Ear Candy is scheduled to take place on April 18 at 7 p.m. in the CHS auditorium. Those interested in attending can purchase tickets in advance from the directors in choir office or at the gate.