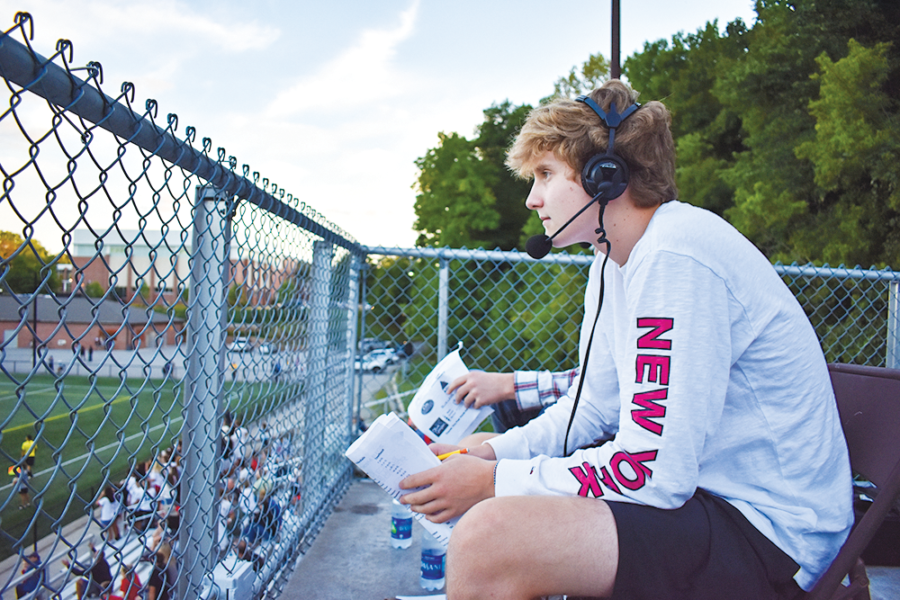 At a young age, Ethan D’Eramo, WHJE color analyst and senior, said he found his passion for sports broadcasting through this school’s radio program.

D’Eramo said, “In the summer of my eighth grade year, I went to the WHJE radio camp and they taught us how to use the editing software, and I already liked sports, so I knew I wanted to get into the sports part of radio.”

Ross Abdellah, WHJE play-by-play announcer and senior, said he has family connections to  WHJE which led to him joining the program.

Abdellah said, “My brother was in the program and listening to the football and basketball games inspired me to join the program.”

Despite their different paths to the program, both D’Eramo and Abdellah have become integral parts of WHJE, the sole radio station of CHS for 55 years. Over that time, the program has featured notable alumni that have worked at professional organizations such as WISH-TV and ESPN, most notably Pat Boylan, the play-by-play announcer for the Indiana Fever and sideline reporter for the Indiana Pacers.

Sports announcers are typically considered as people who operate behind the scenes; opposed to the athletes and coaches participating in the game; however, D’Eramo said he feels appreciated doing his job.

D’Eramo said, “I think that a lot of people appreciate what we do, especially on social media. I think that enough people listen to our broadcasts, especially for the football games; so overall, I think we’re appreciated enough.”

Abdellah said he believes being in the business of sports announcing has its pros and cons.

Abdellah said, “The pros of sports broadcasting are the experiences that you have in this field, the things you learn from the upperclassmen in the program and being able to see the games from a different angle. The cons of it are that sometimes you may get criticized as being a biased reporter by some of the fans who listen in on the game.”

D’Eramo said being a sports announcer requires a multitude of skills in order to succeed.

“A lot of people think you have to just have a good voice to succeed in broadcasting, but you also have to have the knowledge to do it and know the ethics of it,” he said. “If you know sports well, you can really do anything with sports announcing.”

Abdellah said he feels he brings good insight into sports announcing due to his history with sports.

Abdellah said, “I used to play football and basketball, and I know a lot of things about both sports; being able to listen to the game from a former player as opposed to someone who’s never played sports before makes a big difference for the listener.”

D’Eramo said during intense sports matches, the announcers really try to give the listener the full experience of what happens in the game. He said, “During football games, we get really excited; during the Carmel vs. Trinity football game this year we were very excited and we try to get whoever’s listening really excited.”