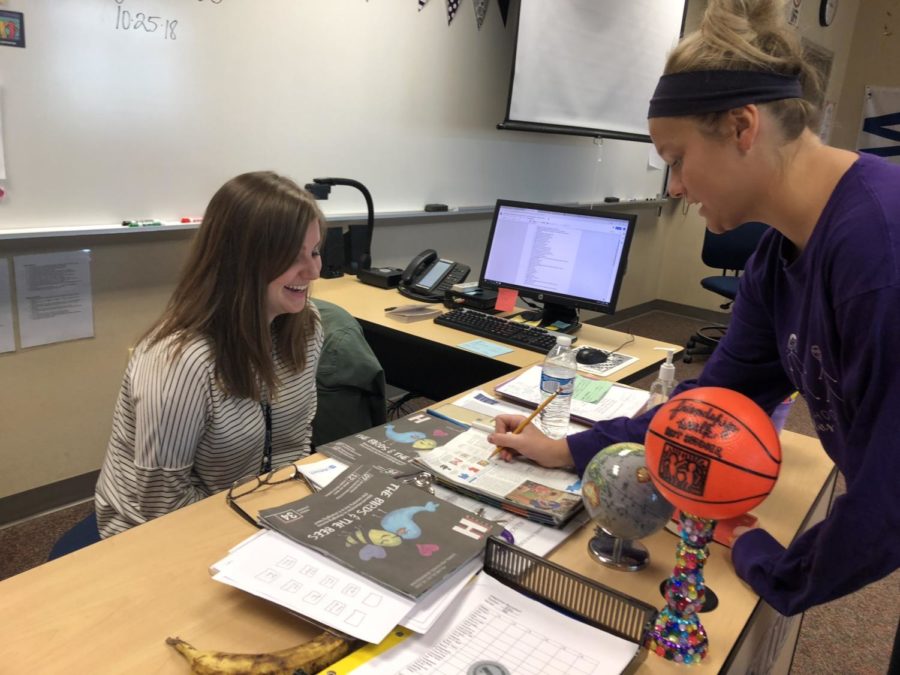 Best Buddies club sponsor Christine Ellis and Halle Throgmorton, vice president and senior, discuss the Best Buddies article in the HiLite. Throgmorton, who said she loves all of the club’s events, said, “Getting to know everyone, just the whole family atmosphere, getting together, always makes my weeks and months."

The Best Buddies Club will host a Halloween party tomorrow, Oct. 31 from 5 to 7 p.m. at Main Cafeteria as their last event for October. The party will have several activities so that the Best Buddies members can still enjoy Halloween.

Club sponsor Christine Ellis said, “A lot of our friends, they’re too old for trick-or-treating now, and we want them to have the same awesome fun experience on Halloween, so it’s a great way for all of us to come together and celebrate.”

Halle Throgmorton, Best Buddies vice president and senior, said the party will include a costume contest with various categories such as “scariest costume” and “best buddies” costumes and give out bags of candy as prizes, which she said is always a fan-favorite. She said there will also be games like “wrap the mummy in toilet paper” and “guess how much candy in the jar.”

Throgmorton said, “We’ll do different games… we like adding that personal touch to Best Buddies where we make some of the games, so we’ll do ‘pin the boo on the ghost’ and different things like that.”

Ellis said she is most excited to see club members in their costumes. She said, “(Costumes) show their personality and what they’re interested in, and that for me is a way to get to know the buddies better.”

On the other hand, Throgmorton said she is most excited for the dancing at the party because dancing is her favorite part of all Best Buddies events.

Throgmorton said, “It is a ball just to see everyone letting loose and having fun and not caring what anyone thinks and to see everyone dressed up and dancing, that’s just going to make it so much better.”