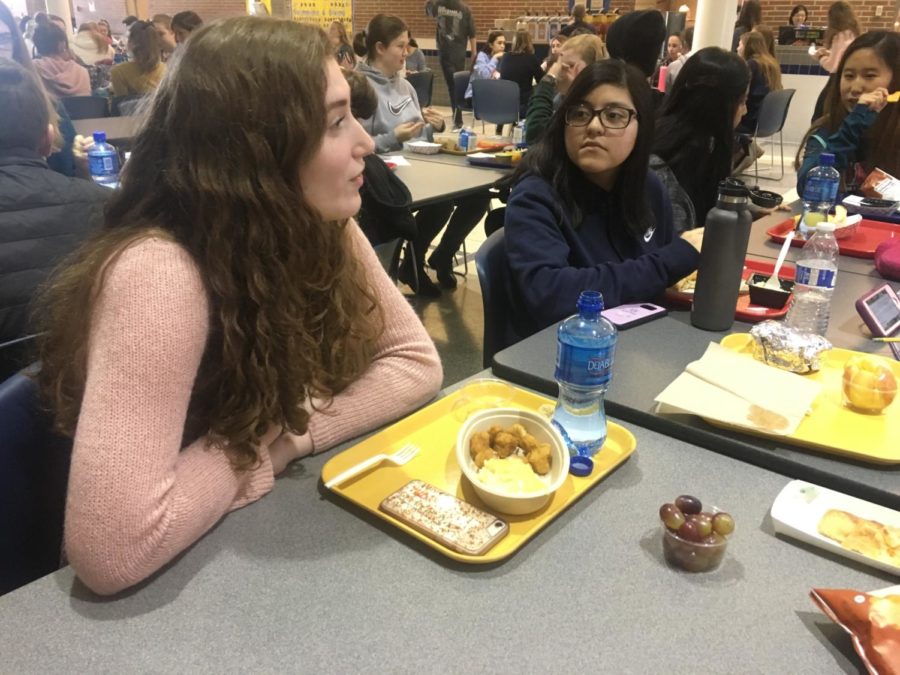 Sarah Konrad, TEDx member and sophomore, talks to her friends while eating lunch in Greyhound Station. She said she is sad that social studies teacher Allison Hargrove is no longer the TEDx sponsor, as she always talked to all the club members and had a positive effect on the club.

Rhea Acharya
The TEDx conference in December marked the end of social studies teacher Allison Hargrove’s time as TEDx sponsor; starting this semester, social studies teachers Michael O’Toole and Allen Wheeler will lead the club as co-sponsors.
O’Toole said, “I became interested in the club last year. So, I had gone to some of their events and meetings. (Hargrove) has really put a lot into this program, but she felt like she wanted to see the big conference in December through and then kind of step away from the club. So, at that moment, she had kind of talked to myself and Mr Wheeler asking if we would like to take over at this point because that would be a good break-off point.”
For Selin Oh, TEDx president and senior, she said this transition came at a good time so even as president, she does not feel too stressed about it.
Oh said, “I think because the timing is pretty good, I don’t feel super overwhelmed by (the transition) or anything. The timing in the sense that we just finished our last conference, and now we’re moving into a new era. Also, all the leadership positions are going to be filled by new people anyway next year, as we’re all seniors. So it’s not that bad.”
Hargrove said the main reason she stepped down from her role as TEDx sponsor is because it was becoming increasingly difficult for her to schedule in time for the club due to other commitments. She said she is confident, though, that the club will be in good hands under the leadership of O’Toole and Wheeler.
She said, “I hand-selected the people who are taking over. They helped during the first semester, so we had a transition period so that they know what is going on and they know how the club operates. So it’s been pretty seamless, and of course, I’ll also help out if they ever need anything.”
However, according to Sarah Konrad, TEDx member and sophomore, she said she will miss Hargrove’s upbeat and helpful presence. Konrad said, “I’m really sad about the switch because I love (Hargrove). She is just so super awesome.” By Rhea Acharya
Delete Image
Align Left
Align Center
Align Right
Align Left
Align Center
Delete Heading