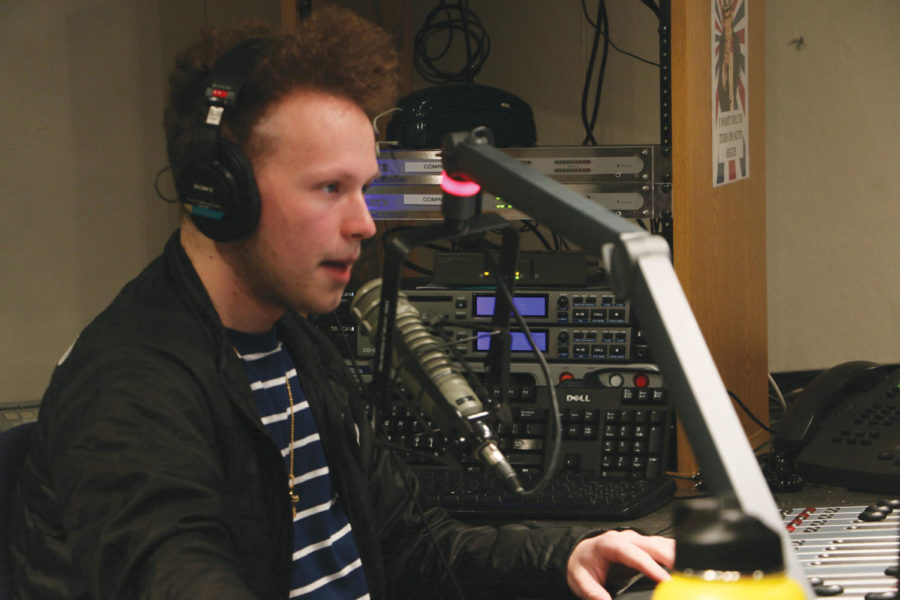 Inskeep talks with a caller on his radio show. Inskeep said he tries to keep a distinction between an artist’s music and their personal actions and beliefs.

The issue of celebrity politics is still at the forefront the entertainment world as the calendar flips to 2019. In the midst of another politically-charged awards season, Super Bowl LIII and its halftime show performer, Maroon 5 will only support the National Football League (NFL) and the controversies surrounding it by agreeing to perform for it. It is worth noting that Maroon 5 was not the first choice for the NFL. The organization was first spurned by Rihanna, who declared solidarity with Colin Kaepernick more than two years after the former San Francisco 49ers quarterback first started kneeling during the national anthem to protest racial discrimination.

Junior Connor Inskeep has covered celebrity politics on his radio show at WHJE. He cited Rihanna’s boycott as an example of the power of the celebrity protest. Inskeep also said he appreciates Rihanna more for her protest and will continue to be a fan of her. “Personally, I’ve grown up listening to her; she’s been on the scene for over 10 years now. I really respect her for standing by Kaepernick; her refusal speaks volumes about her character.” 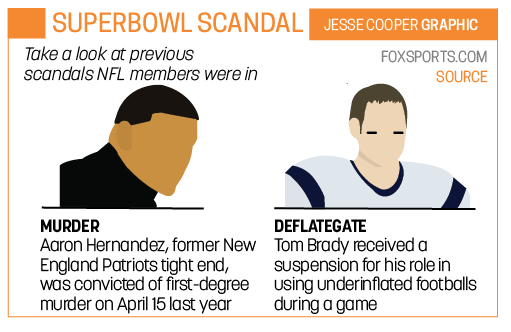 “(Not performing at the halftime show) is really sending a message towards the National Football League that ‘I don’t agree with what you are doing, and because of your actions, I won’t do anything for you,’” he said. “I think she is justified in what she is doing.”

Rihanna is far from the only celebrity to snub the NFL over race relations and proclaim support for Kaepernick. Pink, Jay-Z and Cardi B are other famous stars who have declined to perform at the Super Bowl over the Kaepernick issue.

World History teacher Katie Kelly said the current wave of activism has historical roots despite the rarity of protests even 50 years ago.

“I look at Muhammad Ali, who protested racial injustice and the Vietnam War, Jesse Owens, the Black Power stand at the Olympics; these are all great examples of where this has happened before,” Kelly said. “This is not the first time sports has been used for protest.”

Kelly cited technology as a key factor in the growth of celebrity protest over time.

“Celebrities are revered as above human; there are people that literally worship them,” Motaganahalli said. “With their large role in society, they should definitely be allowed to voice their opinion just like any other normal human. That opinion can sometimes be very important; it needs to be heard.” 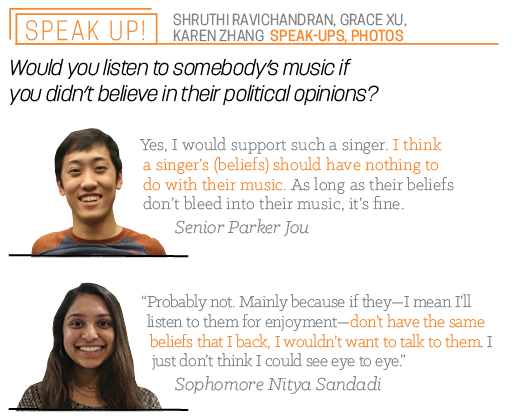 Kelly said celebrities more becoming involved in politics can have positive effects too.

Kelly said, “I look at the Women’s March(two years ago) where there were some high-profile women (that were in) the entertainment industry that brought a lot of people together to support a cause.”

Both Inskeep and Motaganahalli said celebrity politics and news should be kept separate from their careers.

“My biggest thing on my show is to keep the news separate from their music or their careers. For me personally, I can’t stop supporting a career because of a celebrity’s politics or their personal views,” Inskeep said. 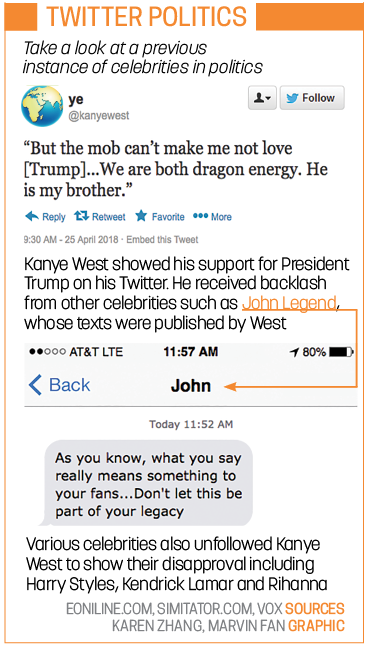 He said, “The reason I follow (a celebrity) is not because they align with my views. I follow people like (NFL star) Antonio Brown because he’s the best at what he does. He has worked so hard to get to where he is, even if he (says) some stuff that I don’t agree with.”

Motaganahalli also said if he were a celebrity, he would take a stand and use his platform to influence his followers.

Motaganahalli said, “If there is something that I see and I hear that really resonates with me, I would take that step to voice my opinion over it. If I lose fans, sure, but I don’t think that should be my concern. The issue is me being actually able to speak out. If societal pressure is going to restrict me from speaking out, then that’s an even bigger issue,” he added.

“That’s why I respect celebrities who make a statement,” he said. “There’s so much pressure to stay in your own lane, so I respect people who speak out in spite of that.”