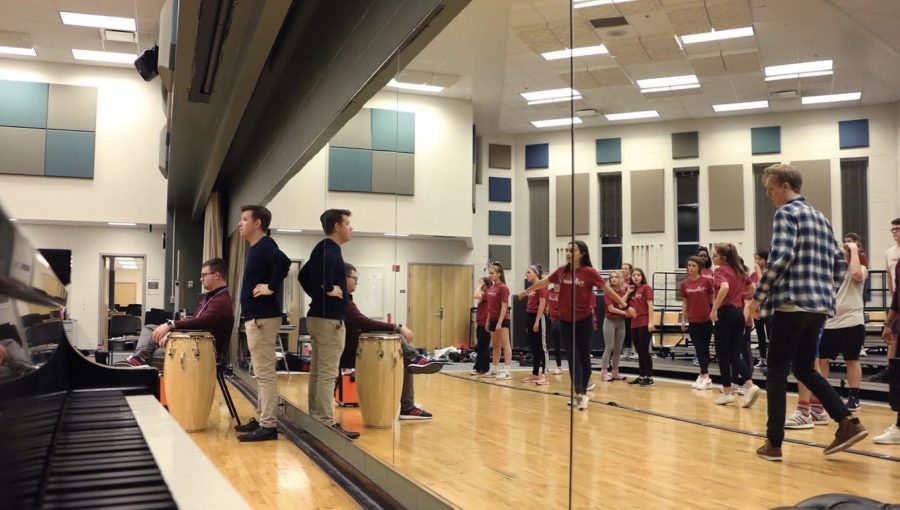 Choir director Kyle Barker oversees the Ambassadors during their rehearsal after school. According to Ambassador and junior Danny Ghalayini, the Half Notes event is a much more interactive experience for the kids than typical choir concerts and events.

Tomorrow evening, one of the most prestigious choirs at CHS will host the first-ever Ambassadors’ Half Notes event, where students in grades four through six will come to CHS to learn a song and dance that they will perform during halftime at the Ben Davis basketball game that night. 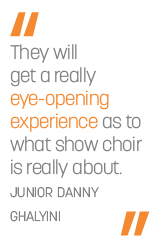 Ambassadors’ director Kyle Barker said he decided to implement this event as a recruitment program for CHS performing arts. Additionally, when he was a student teacher at Washington Township, they conducted a similar event, and he said the success he saw influenced his decision to copy it at CHS.

Barker said, “My hope is that the kids will gain experience singing and dancing, but the biggest thing is to get them to the high school, meet the choir teachers and meet all the Ambassadors, who are people they are looking to and aspiring to be like.”

Ambassador and junior Danny Ghalayini said he understands the influence they have on the younger children, and said he’s excited to see the impact he and his fellow Ambassadors have.

“I think it’ll be really cool to see the enthusiasm and passion the kids have for performing,” he said. “I think the kids will gain confidence in themselves and, additionally, they will get a really eye-opening experience as to what show choir is really about.”

Ambassador and junior Chendi Liu said she also hopes the children who come can feel what it is like to be a part of CHS choirs.

She said, “The kids will get to see how fun it is to sing and dance with each other and how much of a community it is and, hopefully, it feels very welcoming for them.”

Aside from the benefits for the registered students, Barker said this event will also serve as a mentorship opportunity for the Ambassadors.

“We talk a lot about leadership, setting an example, what image (the Ambassadors give) to the community and to the people around them and what they do to help encourage that, so this is a real-life chance for them to put that into practice,” he said.

Ghalayini said he agrees and is looking forward to this opportunity.

“Individually, all the Ambassadors will gain from this event,” he said. “Teaching younger kids is going to help us become stronger as a group and let us impact the community positively.”

According to Barker and Liu, since this event occurs in the middle of the Ambassadors’ competition preparation, it is also an opportunity for them to relieve some stress.

“I think it will be a lot of fun because (the Ambassadors) are always really stressed, so it will be nice to be reminded of how simple the love for music can be,” she said.