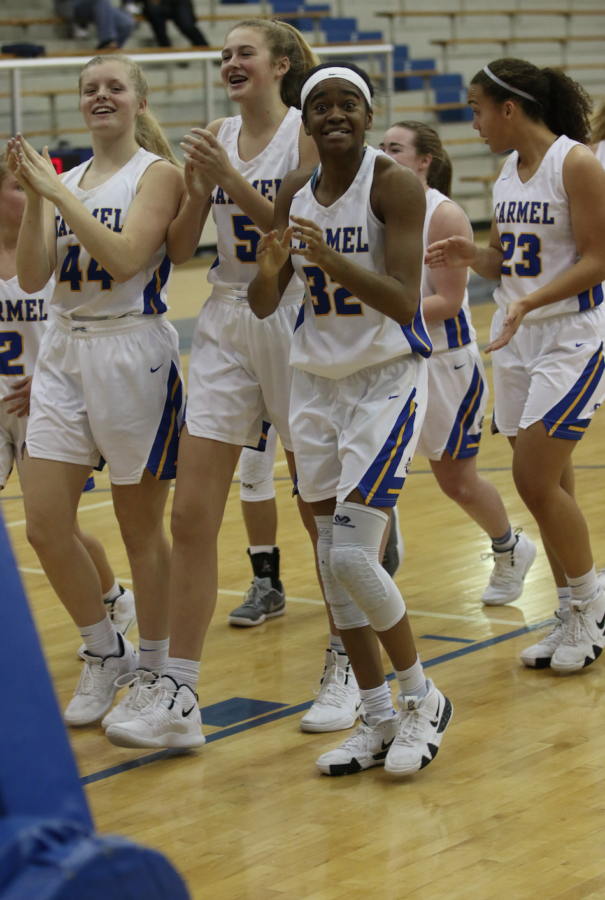 Greyhounds forward and senior Reagan Hune celebrates with her team after a win. Hune is averaging 11.5 points per game. "All season we've been working up to this point and I think we're ready to make a big impact," Hune said.

The Greyhounds girls basketball team is coming off a weekend loss to the Ben Davis Giants 60-56, Greyhounds freshman and guard Kate Clarke led the team with 14 points while senior and forward Reagan Hune followed up with 12 points. Hune said that the team didn’t really put their focus in the right area in the second half. “We knew Ben Davis was going to come out with everything we had, I thought I was producing really well for our team but we really didn’t focus on certain players like we should’ve and that’s what really killed us,” Hune said.

Greyhounds head coach Erin Trimpe said that her team has made a lot of progress since their first game of the season against Homestead. “We really came out as a fairly inexperienced team at first, watching our film from game one up until what we’re doing now especially with the win streak that we’ve got going on, we’re really coming together. We played eight of the top 10 ranked teams in our first 10 games and it’s just a gauntlet, and we just wanted the girls to understand that we’re playing very well we just need a couple more things to come together, and we’ve started to see those things come together in the past few weeks,” Trimpe said.

The Greyhounds travel to Hamilton Southeastern High School to play the Noblesville Millers, the Millers are led by seniors Maddie Knight and Mallory Johnson who are both averaging 15 points per game respectively. Trimpe said that it’s going to be a team effort in order to make it through sectional play. “All season we’ve been stressing a team-first mentality and as we are going through the season and looking at our stats we’ve really been winning by committee. Every girl has bought into their role and bought into what their purpose is and what they can do for us, and so I think the most important thing will be for them to encourage each other and buy into their roles and I think that’s what’s going to push us into success,” Trimpe said.