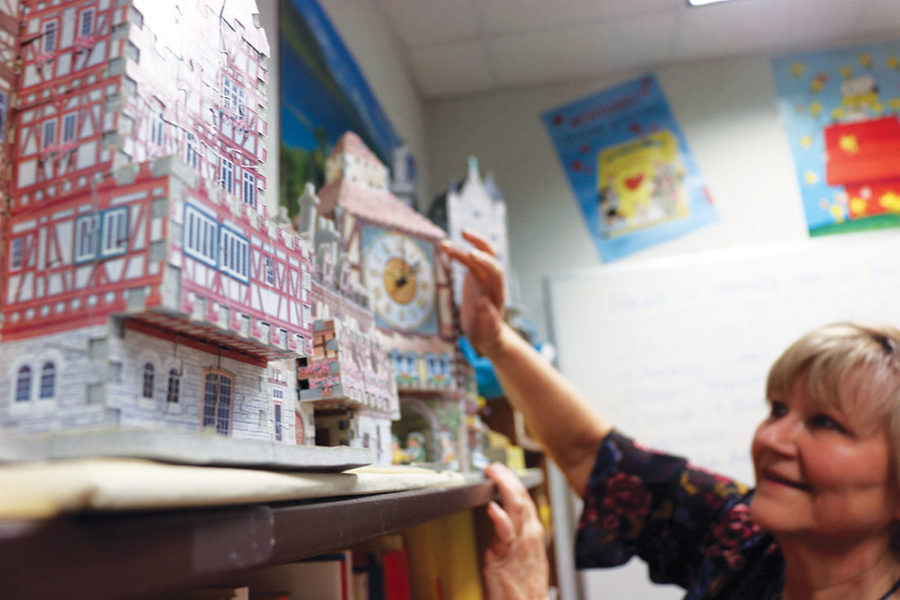 German teacher Angelika Becker shows her antique German houses and specifically points out the clock present inside the structure. Becker said moving to America was hard because of the language divide that she had to face everyday.

Last summer, junior Christian Peasley spent 21 days in Japan with a host family through the Japanese foreign exchange program. He was fully immersed in the culture, despite having known next to nothing about the country just a few years earlier. The over 30-year-old program is a partnership with our sister school in Japan, Seikyo Gakuen, in which members host students and teachers and travel to Japan to stay with a host family on alternating years.

“It’s a really well-oiled machine. We try to show appreciation for other cultures and other countries,” Drew Grimes, member of the program’s steering committee and science teacher said. “We do some sight-seeing, but a lot of it is just living with the student from the other country to get to know how they live life over there.”

Since he joined the program his freshman year, Peasley said he has learned much about the history and culture surrounding Japan and noticed several differences in mannerisms between Japan and the United States. One custom that he noticed was bowing. According to travel site Trip Savvy, Japanese people bow for many reasons, including to greet others, show respect or express gratitude.

These types of mannerisms vary widely among different countries, often due to underlying cultural influences that may contribute to culture shock when visiting or moving to a new place. The Japanese foreign exchange students will arrive on March 20 and leave the morning of March 29, which is shorter than the 17-day trip that CHS students will take next year. However, Grimes said these students from opposite sides of the world often go through similar experiences as they travel to foreign countries.

A common barrier people face when interacting with foreigners is with language. Grimes said Japanese can be overwhelming for American students, with common street signs in kanji, a character set made out of thousands of Chinese characters, according to Japan-Guide.com.

German teacher Angelika Becker, who grew up in Germany, said she had to overcome a language barrier when she moved to the United States. She had learned a bit of English in school, but she said surviving in a different country with the vocabulary she had learned in school was hard.

“I went to the store sometimes, and if I didn’t find what I wanted, I left. Because I didn’t know how to ask for it,” Becker said. “I had to leave, go home, find my dictionary and look it up, and then go back (to the store) or go back with my husband at night.”

In contrast, Peasley said language was not a big issue for him. He said not knowing Japanese shouldn’t deter students at this school from communicating with the exchange students.

“If you don’t know any Japanese, it’s okay. They know some English,” he said. “Hand motions and charades are important.”

Grimes said the Japanese students have varying language abilities, but all are just high schoolers who are excited to learn about American culture. He said the program works on informing its members at this school about the differences between Japanese and American culture to better prepare them to be hosts for the Japanese students. Becker said learning more about the culture before she’d moved to the United States would have made her transition easier, which is why language classes at this school tend to focus on both language and culture.

“Americans, we’re pretty good at being loud and boisterous with a lot of large gestures,” Grimes said. “What we work hard on is try to get kids to be aware. If you look around and no one else is doing something, you probably shouldn’t do it. The best word (I learned in Japan) was dozo, which means, ‘You first,’ and it made me look really polite, but it gave me a chance to see how other people (would do it).”

He said, “The biggest thing I recommend is just smile, be kind, be friendly because that travels. That is a world-wide skill that kids recognize.”