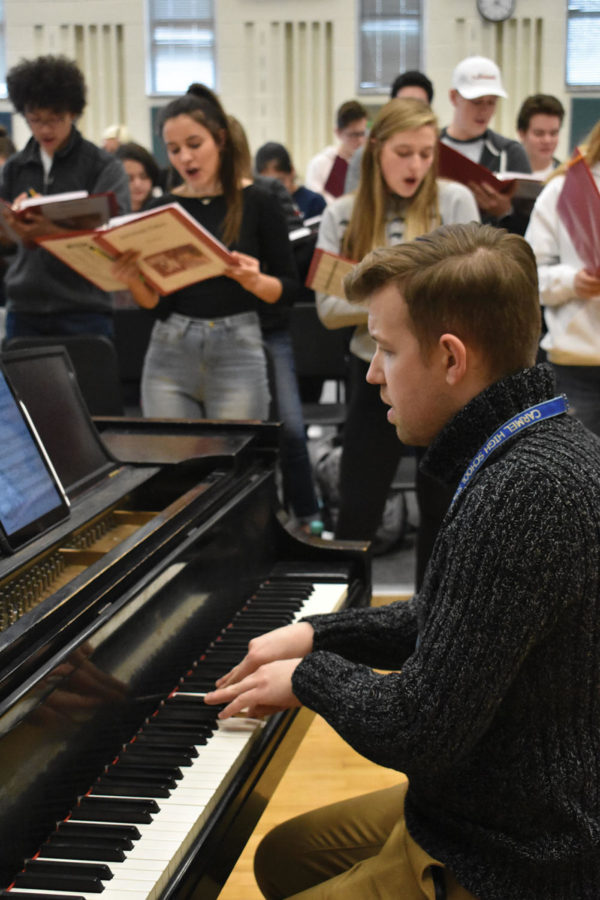 KEYS TO SUCCESS (RIGHT): Kyle Barker, associate director of choirs, plays the piano during a rehearsal. Barker said he hopes that this musical will target a different audience.

For this year’s spring musical, CHS will take the contemporary route by putting on the show “Bring It On.” The show centers around Campbell, who is the cheerleading captain of an affluent school before she moves to a less well-off school and has to adapt. While  CHS has showcased musicals in the past targeting different audience groups from adults to children, this year, the directors said they hope to attract the majority of CHS: high school students.

Kyle Barker and Sam Chenoweth, associate directors of choirs, said a main reason they chose this musical was its appeal to teenagers.

“We try and do something that’s different from the year previously,” Barker said. “Last year, we did (a) Disney (musical), so we had to either do some sort of period musical or we had to go contemporary. We decided to go the contemporary route this year.”

Chenoweth said this year was a chance for students here to gain new skills from previous musicals.

“We wanted to give a different experience and to provide a different kind of training as well,” Chenoweth said. “And, we still wanted something that still could be semi-large cast.”

According to Sophia Hughes, Accents member and senior, the different training could mean cheerleader training, as cheerleaders play a major role in the show.

Hughes said, “(The cheerleading squad) is going to help with the musical and help to teach how to actually do cheer because show choir dancing and cheer are different things, so I think there’s going to be a lot of flips and cool things that we don’t usually do.”

However, Hughes also mentioned that cheerleading isn’t the only difference “Bring It On” will have with musicals in the past, as this year the musical features adaptations from the directors as well.

“I think (the directors are) taking a general approach to the characters,” Hughes said. “(The characters in the movie are) mostly black and Hispanic students, and since Carmel doesn’t have many black and Hispanic students in theater, I think (the directors are) taking more of a general approach, to economic rather than racial differences.”

According to Barker, the directors had to make a few tweaks to the show due to who auditioned and who they casted but tried to keep the overall themes similar to the original.

“(Any adaptations made to the musical)  come from when we cast the show. We cast based on who shows up and what fits the best role,” Barker said. “So there were a couple of things that had to change because it wouldn’t have made sense with the cast that we have. Some of those edits (to the musical) were made, but it was more  to make sure that we are accurately representing what our cast is, without changing a conversation (in the musical) because that would never be our intent.”

According to Julia Ammons, Accents member and junior, the adaptation makes sense, given possible diversity limitations at CHS.

“I think (the directors) could have chosen a different show,” Ammons said, “but they’re making the best out of what they have. I think a lot of people are getting  worked up because of the cultural representations… but I think Carmel’s doing the best they can.”

However, Hughes said the directors’ choice of play and changes they’ve made has sparked discussion within the choir community.

Yet for Ammons, she said “Bring It On” will potentially be her first musical at CHS, so she isn’t as focused on which role she receives.

“I’m (auditioning) because it’ll be something I can do and get used to the directors,” Ammons said. “I’m sure it’ll turn out fine, and the people we have at Carmel are so talented.”

As for Chenoweth, he said he hopes the musical will provide a different experience for everyone involved.

Chenoweth said, “(The musical’s) super different, intentionally. So it’s (like comparing) apples to oranges, especially compared to the range (of musicals CHS has).”

In the end, Hughes said she hopes the musical will provide a new and different experience for everyone.

Tickets for the shows will go on sale April 8 for shows scheduled May 9-11.