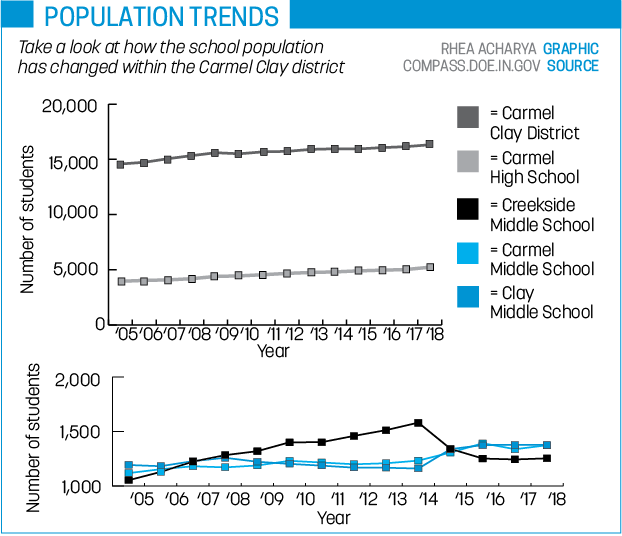 The population of Carmel Clay Schools  will rise by 16,000 from the 2018-2019 school year, with this school’s population reaching over 5,500 in 2021, according to the newest demographic report. These numbers directly negate previous predictions that there would be a quick population decline after 2016. With this in mind, the school board has begun to consider redistricting students based off of demographic charts and population sizes in certain areas of Carmel.

Superintendent Michael Beresford said the district looks at these reports to make predictions about student demographics in the coming years.

“What we look at is the projection and then the real numbers, and we respond. Every fall, we have what we call ‘hot spots’ where a student population will be higher in one school than another. We would have to make some adjustments as class sizes get too big.”

Last year, the district administration decided to close both Orchard Park and Carmel elementary schools and construct two new buildings. According to Beresford, redistricting will take place for the 2020-2021 school year in anticipation of the these two new elementary schools for which construction begins in the 2019-2020 school year.

Junior Merna Botros was one of these individuals who redistricted from Creekside Middle School to Carmel Middle School just before her eighth grade year. She said she believes redistricting is a good thing but that it should be a choice for students, so that they can decide what the best fit for each student is.

“(Being redistricted was) good because a lot of the people I met at Carmel were people I ended up being with in my high school classes,” Botros said. “It also made me meet a lot of new people I never had seen before.”

The purpose for the redistricting is to balance the student population in each building, which Beresford said concentrated more on the west side of Carmel. Currently, the majority of the student population live on the west side, while the majority of elementary schools are located on the east side. Beresford said redistricting will alleviate the pressure brought by large classroom sizes.

Beresford said, “That’s why the purpose of redistricting is to rebalance the number of students in each building, so we don’t have one building that has too many kids in it. It makes the whole education system run more efficiently and easier to work with class sizes.”