To All the Directors They’ve Snubbed Before: Lack of female Oscar nominees for best director highlights implications of discrimination for female students pursuing film careers 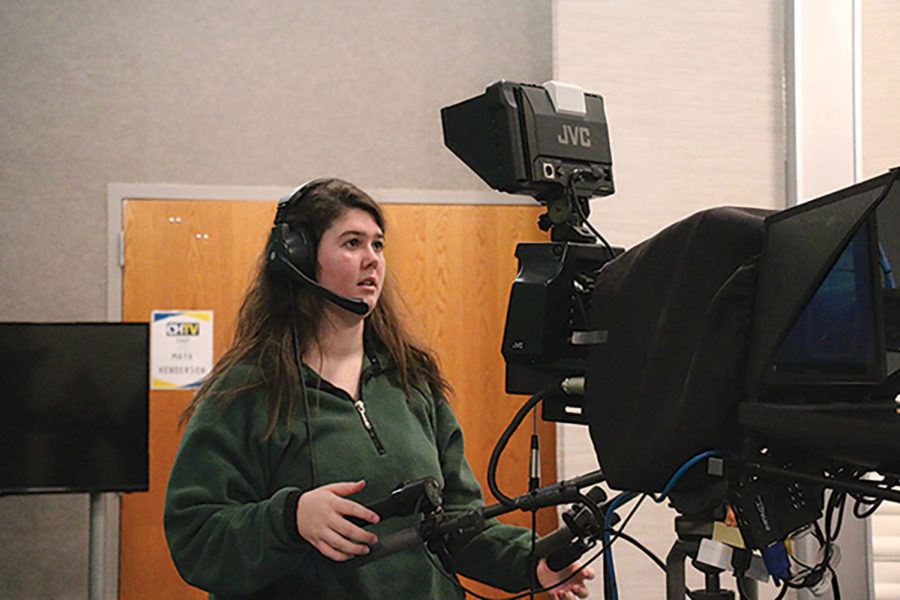 Maria Saam, CHTV Director and senior, adjusts the camera angle during the morning SRT show. Saam is one of the main directors and in charge of stage setting, lighting and audio cuts during the show.

“Wonder woman.” “Lady Bird.” “To All the Boys I’ve Loved Before.” Beyond the massive success of each of these films, there is another factor that unites them all. Each one features a female director. From the reception of each of these films, viewers can see that women have made tremendous progress in the film industry. Yet, in this year’s Oscar Awards, which occurred on Feb. 24, not a single woman received a nomination for best director, despite the fact that there were nearly 80 female-led films produced in 2018. Creative Artists Agency conducted a study that found female-led films consistently outperformed male-led films at the box office of the highest grossing films from 2014 to 2017.

For Maria Saam, CHTV Director and senior, this disparity directly affects her future plans. Saam plans to pursue a career in film and said her goal is to work for the television and entertainment industry in Los Angeles. Saam said although she knows the odds are not in her favor, she still hopes to direct in the future.

Saam said, “It can definitely be intimidating when looking at the statistics, but being in a male-run industry is always intimidating. I definitely believe that my work needs to be fueled off of my creativity and that I’m not leading a movement, but I’m creating a pathway for hopefully more women after me (so) they see that it’s possible and that statistics can always change.”

Chendi Liu, student director of “Bring It On” and junior, said she agrees that seeing women succeed in Hollywood can inspire young girls to follow their own film aspirations,as well as prove the advantages of female directors to Hollywood.

Liu said, “Having women directing movies like ‘Wonder Woman’ and including women of minorities shows people the ability of women. It’s one thing to just say that men and women are both capable of things, but (these successes) are a product that everyone can see, and it’s an inspiration to the next generation.”

Beyond creating popular movies, Liu said being in a position of leadership as a director empowers women on an individual level.

Liu said, “(Being student director) has shown me how one person can make a difference. A different perspective shows me how one person being in charge is extremely tiring. It’s interesting how people can work together, and I think that it’s something I like to do. I really enjoy giving other people opportunities and helping behind the scenes to produce something where they’ll shine.”

Furthermore, according to Women and Hollywood, a website that focuses on the achievements of women in Hollywood, of 2018’s top grossing films, only four percent of directors were women. The fact that these films were more financially successful disproves the common misconception that female-led films are less profitable than male-led films.  Liu said some of that financial success may come from women directors’ point of view.

She said, “Obviously everyone in life offers a different view, and if you only have 50 percent of the population presenting their views, it’s not a matter of if men view something differently than women, but it’s allowing everyone to express their opinions.”

With the successes of female leadership in film, then, it’s unclear why women are still underrepresented as directors in the Hollywood film industry.

“We’ve seen some progress being made, but it’s really slow. It’s slower than I think a lot of people expect,” Peterson said. “There is a lot of trust built already, and it seems to be male-dominated. I’m not sure what is holding (women) back, other than lack of opportunity.”

In terms of overcoming these setbacks, Peterson said the best thing aspiring female directors can do is stay persistent and continue to work hard.

Peterson said, “Advice I’d give pretty much to anybody is make your stuff. Just go out and make it. No one is going to ask you to. No 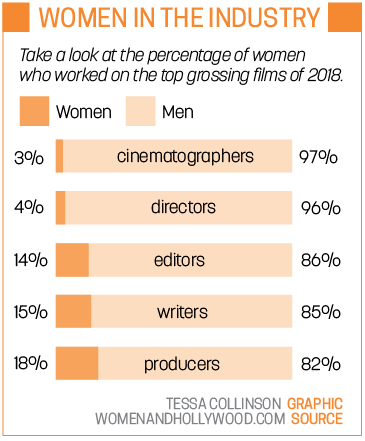 one is going to give you permission, so you need to go out and do it on your own.”

“We’ve got great platforms out there between YouTube and Vimeo and Instagram. That’s kind of the new gatekeeper. There really is no gatekeeper out in Hollywood anymore. People are making their careers through YouTube or other social network platforms, and they don’t need a studio’s permission to make a movie.”

Determined to follow her dream despite the obstacles, Saam said she plans to continue to work hard and be persistent in her film pursuits.

“I’ve been given the advice to not have a back up plan in life because if you do it’ll make it that much easier to quit your goals and dreams,” Saam said. “‘Don’t settle’ is the biggest thing that I’ve followed by.”