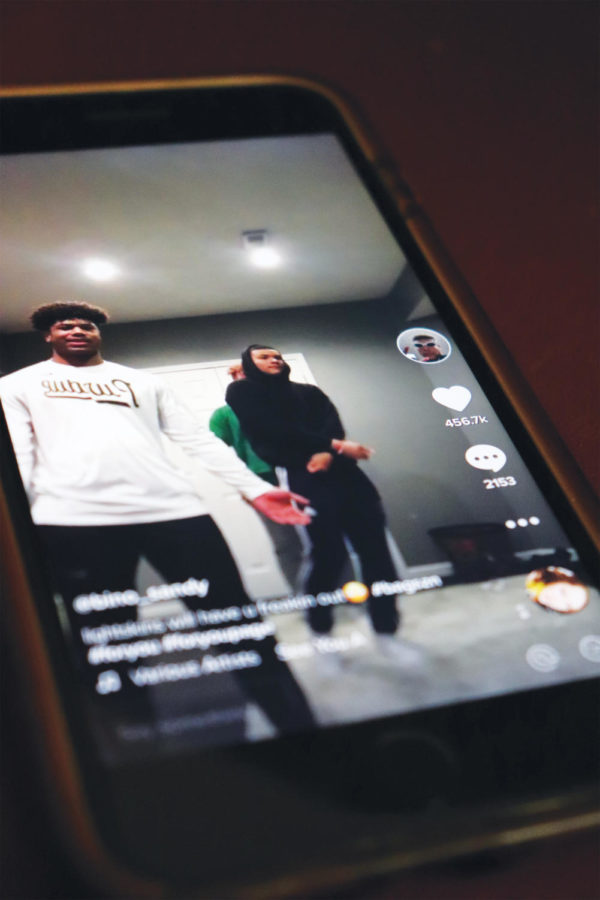 Senior Brandon “Bino” Sandy watches a TikTok he and his friends filmed. His video received 459,100 “hearts” and 8.7 million views on Twitter.

“Going viral” was something senior Brandon Sandy and his friends never expected. However, after creating a TikTok-a short music video-in mid-February, Sandy noticed a countless number of notifications on his phone.

The video, which shows Sandy and his friends dancing to a song, reached over 100,000 views in the first couple of hours, and it had over 700,000 views by the time Sandy woke up the next morning. Sandy said, “I’m not really sure how the video went viral, my friends and I thought it would be really funny and I guess everybody else did too.”

Sandy’s video, which now has over 459,100 “hearts” on TikTok and 8.7 million views on Twitter, is featured on many platforms of social media. Additionally the feedback that Sandy and his friends have received has been all positive. Sandy said, “The content that I post isn’t really subject to any negative comments; it’s just lighthearted comedy that everybody could find funny and could laugh at.”

However, while “going viral”-or having something spread quickly and widely on the internet- has been positive for students like Sandy, school social worker James Dowell said going viral may not necessarily always be a good thing. Dowell said, “I think it can be a little overwhelming just to have all that feedback: good, bad and ugly.”

According to Dowell, receiving attention on social media may not always be positive or

helpful. Dowell said, “I don’t think (going viral) ends up being helpful for them because it gives a warped sense of what people are thinking of them and what they should be thinking of themselves. There’s so much out there and when you’re looking for validation from social media and from people you don’t know, you also invite in that unwanted attention and that unwanted feed

Similarly, according to Aspiria.ca, the author has “seen the negative

effects, including depression, severe anxiety, and

even suicide, that (viral) videos can have on a person’s mental health.”

For senior Joey Gutierrez, whose videos from a wedding went viral, feedback was generally positive, and he said his self-esteem was not affected. However, Gutierrez said there could be negative feedback, but he did not pay attention to it.

Gutierrez said, “I don’t really care what people are saying about the video because I think it’s funny and that’s what matters.”

Various people have posted the video of Gutierrez, which shows him at a wedding dancing and crying, to many different social media platforms, including Twitter, Instagram and BuzzFeed. Gutierrez said the video went viral when his cousin posted the video to her Twitter account.

While both Sandy and Gutierrez have already experienced going viral, sophomore Bradley Snyder has aspirations to become viral. While Snyder has only made a couple of TikToks, he said he is motivated to continue, as Snyder said that TikToks such as Sandy’s have affected him.

Snyder said, “I’m constantly influenced by viral TikToks. Whether I am in class or at home, I can’t stop thinking about them; they just run through my head and I think, ‘How can I get viral like that?’”

Snyder said he believes that with consistent uploads and creative ideas, his videos will gain attention. He said, “Because TikTok is such a fun app, I get to just express my creativity and I get to come up with so many unique ideas to really express myself with any given song. I love just seeing all the different trends that viral videos have to offer and making them my own.”

Still, Dowell said even when one makes a video with the intent to go viral, the results may still be unfavorable. Dowell said, “Even when you’re trying to (go viral), expecting it or that’s the goal, it’s a little overwhelming.”

Nevertheless, Snyder has anticipated the possible results of going viral, and that does not hold him back from continuing.

For Sandy and Gutierrez, the results were indeed favorable. Sandy said sharing his content with the public was a positive experience. Sandy said, “This has affected me positively because it’s kind of a way to get your creative thinking out there. You can post whatever you want and people will respect it.” 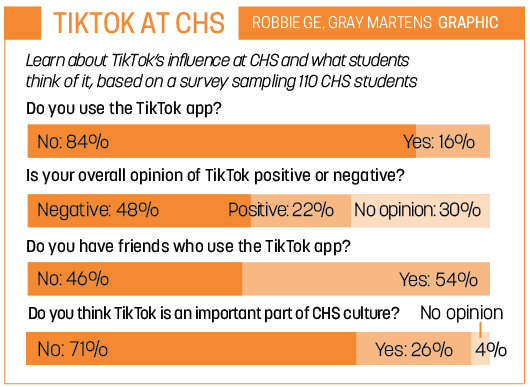