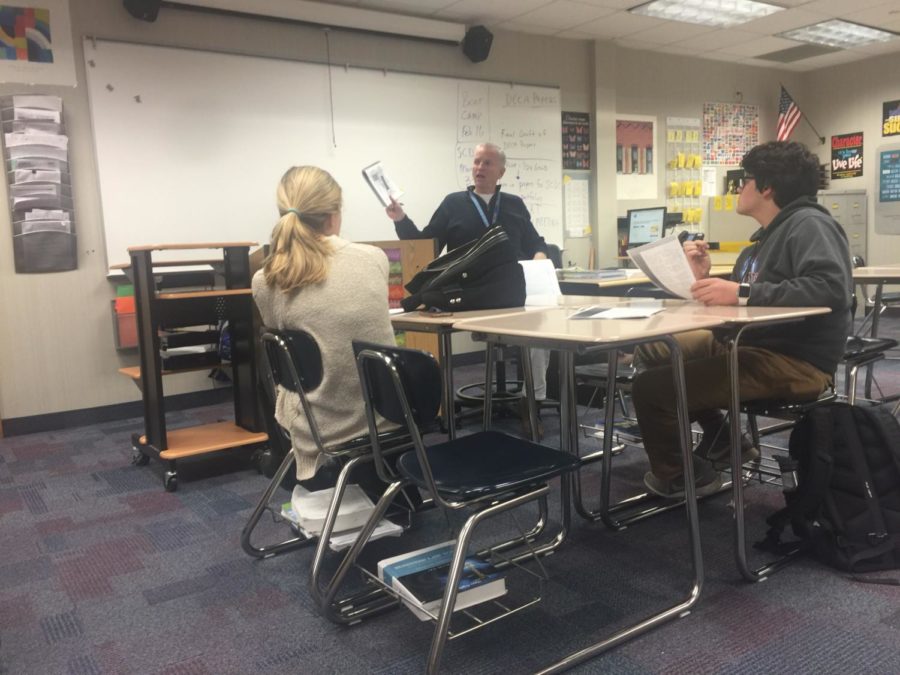 Mock Trial sponsor Robert Browning instructs team members during a meeting. Member and sophomore Zoe Edwards (far left) and junior Max Renay-Lopes (far right) listens in. “I’m also really excited to see who else joins next year, and hope that they bring some fresh perspectives to our team next season,” Edwards said.

According to Mock Trial sponsor Robert Browning, the team is still in the process of scheduling their end-of-season dinner, an annual tradition. He said the team is considering Boombozz Taphouse, a pizza restaurant in Carmel. Two Mock Trial members, senior Rida Bonday and sophomore Zoe Edwards, reflected on the past season and the one ahead.

Bonday said she is a Mock Trial veteran member since her freshman year.

“Mock Trial taught me how to hold the attention of an audience while presenting a logically synthesized argument,” Bonday said. “(I also learned) how to persuade a panel of executives to get on board with my flow of thought.”

On the other hand, Edwards is a new addition to the team from this season, who said she plans on continuing in the next few years.

“Our seniors from the Mock Trial team that are leaving this year (have) given me a lot of hope for next year,” Edwards said. “They did an incredible job sharing the lessons they had learned, and it’s made me feel a lot more prepared to put together next year’s case.”