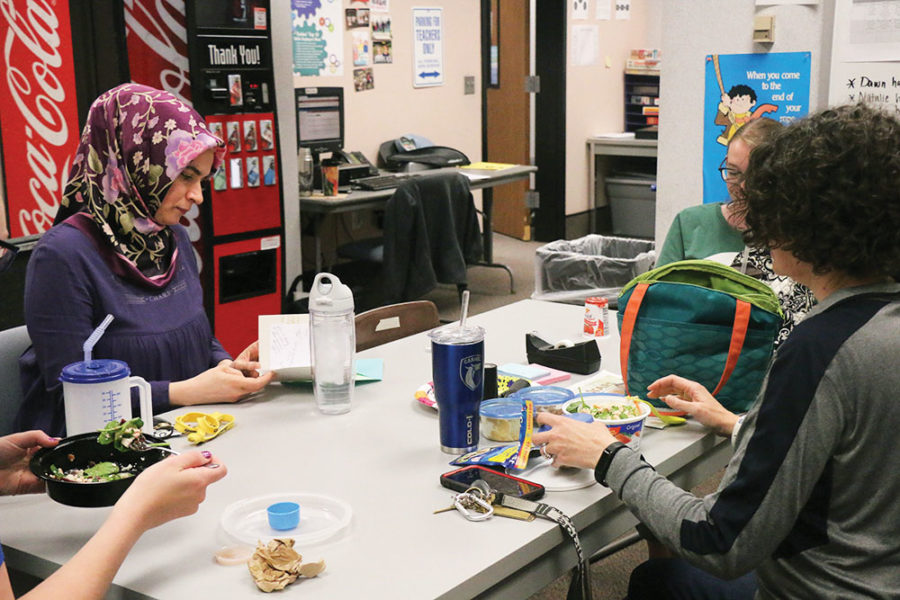 Math teacher Sara Athilan takes part in the Ramadan fast during her lunch break between classes. She said fasting helps her connect with her origins and strengthens her religious commitment.

Ramadan, the ninth month in the Islamic calendar, is also well-known as the time of the Islamic fast, which started on May 5 this year. For sophomore Taha Shakeel, Ramadan has been part of his culture for most of his life. According to Shakeel, Ramadan is the month that allows himself to open up to God and concentrate on his spirituality. Shakeel is not alone, as many students who affiliate themselves with religious beliefs also fast in order to connect themselves with their religion.

Shakeel said, “The fast lasts all month, which is about 30 days until dawn from sunset, so you eat before the sun rises, and you don’t eat or drink until the sun sets.”

Shakeel said during the month, he thinks more spiritually, which strengthened his religious belief.

Just like Shakeel, math teacher Sara Athilan participates in the Ramadan fast and said that along with cutting out food, Ramadan consists of volunteer work. Athilan said the benefits of Ramadan are developing self-control, curbing passions and selfishness and helping one feel for the poor and hungry.

“Fasting during Ramadan is to refrain between dawn and dusk from food, drink, sexual activity and all forms of immoral behavior, including impure or unkind thoughts,” Athilan said. “Since false words or bad deeds or intentions are destructive of a fast as is eating or drinking, we need to maintain good behavior to practice real fasting.”

“This year we did 80 days, Monday through Friday, and it was no meats and no sweets,” Smith said. “It makes me more mindful of the world because we don’t do social media or secular music or TV either.”

Although fasting for both Smith and Shakeel brought mindfulness and a stronger religious connection, Heather Fink, nutritionist and health expert, spoke of the possible negative effects of abstaining from food for a long period of time.

“When we go without food for periods of time, our sugar levels can drop, causing us to have less energy,” Fink said. “Our body then begins to takemuscle mass in order to keep energy levels up and compensate for sugar levels.”

Fink said the drop in sugar levels can impact academic performance by causing a short temper and frustration in a person.

Athilan said she agrees with Fink and said for people who are beginning the fast for the first time, it may be difficult to keep up with it.

“At the beginning of Ramadan, it may be challenging especially around meal time but your body gets used to it in a couple of days,” Athilan said. “Also, some people like smokers may be agitated due to not being able to smoke all day but their lungs need some break anyway.”

Shakeel also said being in a state of hunger can cause him to be more annoyed, but despite this, he said being mindful of the people who do not have food distracts him from the hunger and strengthens his religion.

Although cutting out food has the possibility of decreasing performance levels, Smith said because of the fast, her academics improved.

“Actually, it did impact my academic performance; it makes you more focused. I didn’t have my phone so it really just helped me focus because I had nothing else to do,” Smith said.

For Shakeel, however, he said that Ramadan did not impact his academic performance, as it takes place at the end of the school year.

Shakeel, Athilan and Smith all fast for religious reasons; however, fasting can be done for dietary reasons as well.

Fink said it is important to differentiate between religious fasting and dietary fasting. She said that there should be a clear distinction between the two in order to avoid affecting the overall well-being of a person’s body.

“There should be an important distinction between religious fasting and dietary fasting that can be done in an educated way without medically impacting a person’s wellbeing,” Fink said.

Although Smith, Shakeel and Athilan all agreed that it can be difficult to abstain from eating when they are hungry, they all said that fasting has brought them closer to their religion.

“Anybody can do it if they want to,” Athilan said. “Even if they’re not religious, I think fasting is overall a good experience that can strengthen a person’s mindset on life.”