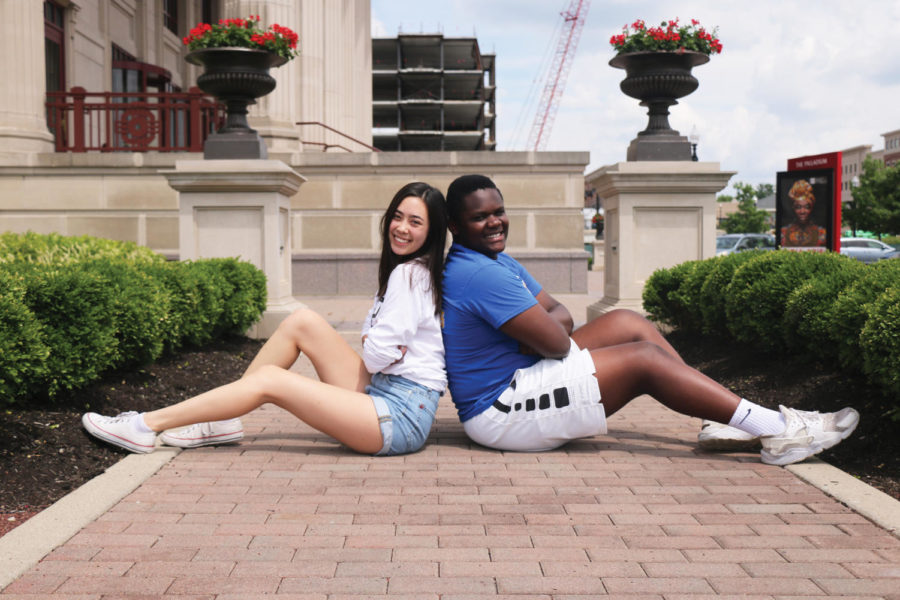 Student body president Maddie Heath and speaker of the House Deion Ziwawo sit back-to-back. Heath said Senate will take over Culture of Care this year. "(I want to make sure Culture of Care) is something that everyone has access to because I feel like in a school of this size, it's really hard to communicate something across the board," Heath said.

Speaker of the House Deion Ziwawo
What are your responsibilities?
One of the main things that I will be doing is running the House of Representatives, so the 700 member student government group. I will also be leading the Cabinet.
How has your role changed over the years?
I have been in Cabinet since I was a sophomore, so I have definitely seen different changes throughout the years. I have seen the same responsibilities through the different Speaker of the Houses, so they would provide duties for organizing events, working with school administration, and making the student government run smoothly.
How does it make you feel to be speaker of the House?
It definitely feels amazing. I have given so much to (student government), and it has given so much back to me, so being able to have the chance to run and have the position for the speaker of the House has changed my high school career.
How do you feel about not having an election? Did that change how you feel about your position at all?
Not having an election mainly took away the fun that happens during that week. I was ready to have that thrill of not knowing whether there was going to be a run-off or not, and I also lost that feeling of competition that is embodied in a normal election. So, I think it took away a bit of excitement, but at the end of the day, I am still glad I got the position. You guys had no choice, you’re stuck with me regardless, but I will make sure you guys realize that I was the right choice.
What is one piece of advice you would give to anyone in the future who is debating whether to run for speaker of the House or not?
If you have that gut feeling that you want to run, do it. Don’t doubt it, because it’s going to come back, even if you don’t think it is. You’ll regret it if you don’t try, so try.

Student Body President Maddie Heath
How has your role changed over the years?
Senate and Cabinet were originally together, so the responsibilities are obviously different now because Cabinet is in charge of primarily Riley events, fundraising for that, Dance Marathon, whereas SBP is in charge of Senate and the events that they do which are primarily for the school, faculty, administration.
What are your specific initiatives for this year?
I’ve been in Senate since my freshman year, and so there are things that I’ve seen that I have liked, things that I’ve seen that I’d like to do differently, and things that I want to initiate in terms of new events. In terms of things that are already happening, it’s really just getting organized. I love my planner; I love my lists. I like efficiency, and so I’m just getting things prepped for next year, getting papers together, getting the calendar in order, making sure everything will run smoothly when the time comes for that particular event. In terms of new events, there’s going to be a Mario Kart tournament. The winter dance will become the Sadie Hawkins slash Galentine’s Day dance, so girls ask guys, but it’s also like a girls’ night out, and then finally the club carnival. More information will be going out later in the year, but it is really for smaller clubs to have the opportunity to get grants to get plans off of the ground because there are so many clubs at this school, and a lot of the time smaller clubs are overshadowed by bigger clubs like DECA and House. There’s a lot of different opportunities that people miss out on because clubs don’t have the funds to get things off the ground or get the word out about themselves.
What are you doing to prepare for this year?
It’s really just getting things in order, getting things organized so when the time comes for the actual event, we’re prepared, and we’re able to just execute it without scrambling around to make sure that we’re on top of things. Honestly, I’m using this summer to do a lot of prep work, so that way by the time the year comes around, I have the majority of Senate things planned, so by the time the event comes around, I’m just able to take the information and then give it to the people who need it.
How do you feel about not having an election? Did that change the way you feel about your position at all?
Honestly, I am not sure how to feel. I know there are some people who considered running and backed out of the election, and a part of me feels as though not having an election took away the opportunity for the student body to choose. But at the same time, I feel as though these past three years, I have (gained) the experience to do a great job, so if running unopposed gives me the platform to work for the school, then I am fine with that.
What is one piece of advice you would give to anyone in the future who is debating whether to run for student body president or not?
If you feel as though you can make a difference, and you have a vision for what you want to do with the position, then you should run. The worst thing that could happen is that you lose the election. And if that’s the case, you have several opportunities to run for offices like Senate, and elections are fun. They give you a chance to talk to so many people and campaign with your friends.