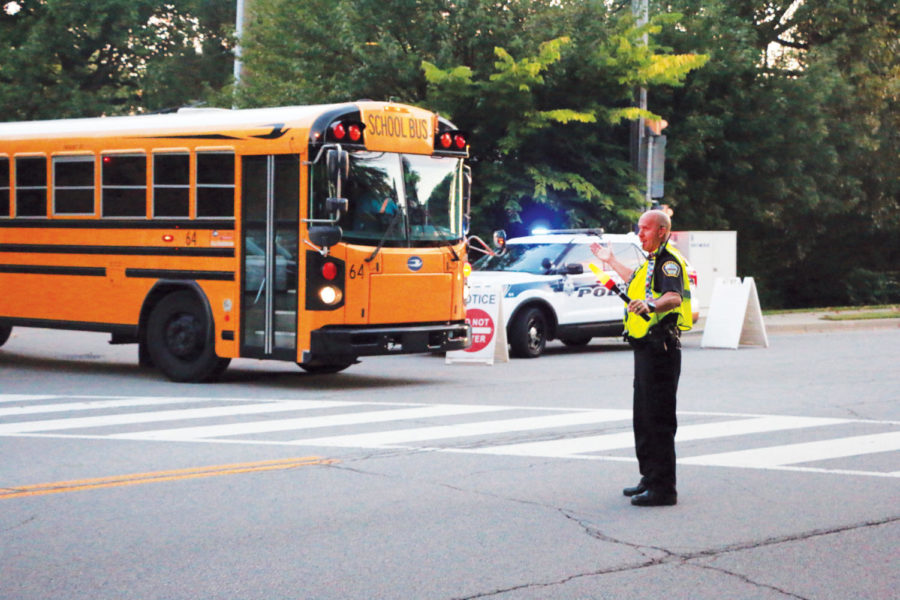 Student Resource Officer Shane VanNatter directs buses and traffic in the morning. VanNatter said a crash could easily occur while the buses are exiting the school.

Known by some as the “Beverly Hills of the Midwest,” Carmel has been named time and time again as one of the safest places to live in America, most recently in August 2019. According to AreaVibes, Carmel’s crime rate is 72% lower than the national average. Despite numerous credentials proving its safety, there is still a concern that the unexpected may happen and that living in Carmel has caused residents to believe they are immune to crime.

At CHS, it is mandated by state law to have emergency drills and practice those drills with students in case of a fire, intruder, earthquake or tornado.

Recently, the Indiana legislative passed a new law which allows teachers and their students to wait up to three minutes before evacuating when they hear the fire alarm. The law went into effect on July 1 and has been implemented at this school.

School resource officer (SRO) Shane VanNatter said the reason for this law is to ensure no intruders or shooters pulled the alarm to draw students out of their classes.

“It gives a chance for police to figure out where the alarm was pulled and whether its a real or fake alarm,” VanNatter said. “Nobody has died in a fire in a school in america since 1959 so you’re very safe in the school. However, there have been people killed (by shooters who use fire alarms as a way to get students in the halls), so the legislature has decided to give an option to wait out the first three minutes and wait for instructions.” 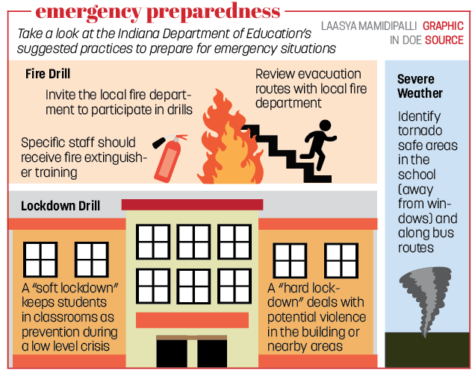 This year, the school has also implemented an extra set of doors between the freshman office and the freshman center. VanNatter said those new additions are meant to strengthen safety measures and that a set of doors will also be built by the attendance office.

VanNatter said the number-one priority in an emergency is to get the students out safely. He said students should be aware of what to do in any situation and should be prepared mentally in case of an emergency

Senior Caroline Ramsey said she has never felt unsafe at this school, but she said she agrees that it is vital to know how to act in the case of a crisis. However, she said following an exact plan is not always the best option in some circumstances.

“The best way to deal with a problem is to understand the problem. Every response should stem from what you know, nothing should be based off of emotions in emergencies,” Ramsey said. “I think it’s more important to have an awareness of what to do and understand why it is done.”

Amy Skeens-Benton, assistant principal and school safety specialist, said the way drills are prepared by the school is through a meeting consisting of officers, the board of principals and administrators.

“Every month, the department of education directs schools on how they should have drills and safety measures,” Skeens-Benton said. She said every school is required to have at least one Indiana school safety specialist.

However, while Ramsey said having plans and drills are extremely important, she is skeptical about their effectiveness.

“Drills are both smart and ineffective,” she said. “I do believe that we need to have a plan but that the current plan is extremely outdated and that the last time any student in the United States died in a school fire was 1959. Currently in the atmosphere of school shootings it is more dangerous for us to continue with our current plan than it is to make a new one.” She added that instead of doing drills, students could be taught basic triage ideas to help people who are injured instead of having to wait for responders.

Additionally, Ramsey said she does not pay attention during the drills because they have been repeated multiple times. She said she believes it is better to understand why the drills are being done and not just have those routines memorized.

Despite those concerns, VanNatter said students should always be in the right mindset and should be prepared in case of an emergency, no matter where they live.

“(Students) always have the ability to come and talk with their school resource officers especially if they any belief that a student might be a threat,” VanNatter said. “Our students are our first line of defense because they’re going to know about these things before we do. Students are responsible for the safety of the school.”